At the end of a Joongang Ilbo article about a ferris wheel accident in Busan on Monday, this appeared:

Meanwhile, a short time after the Busan tragedy, a construction crane in operation at the Cheongnyangni train station in Seoul collapsed, killing two people waiting on the platform of the station. The dead are a 67-year-old man and an 18-year-old female. The crane also cut an electric line during its descent, suspending operations on the Gyeongwon Line.

According to this article, it happened at 5:40 pm, and from the photos, it looks like a piledriver fell over, and smashed through the roof of the station. 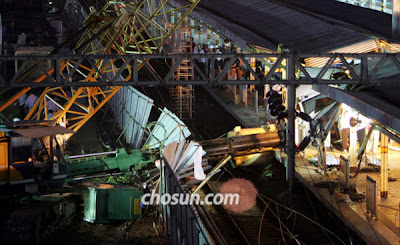 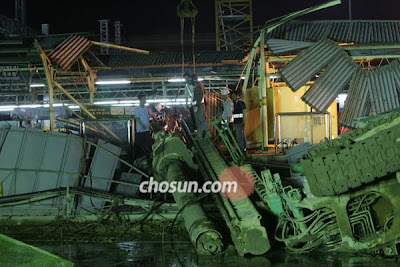 The people standing on the platform likely didn't even see it coming. Here's video of the clean-up operations:

It wasn't so long ago that another construction accident occurred next to a train line, though no one died there.

I was also reminded that August 15 was the 33rd anniversary of the opening of Seoul's line 1 subway. Too bad that day was overshadowed by the assassination attempt on Park Chung-hee which killed his wife.
Posted by matt at 3:28 AM