I came across a copy of Kim Dong-won's 1988 independent documentary Sanggye-dong Olympics. In 1986 he went for a day to take some video of the demolition of poor people's housing in Sanggye-dong in northern Seoul and ended up spending 3 years living with them and documenting their plight. In a nutshell, they are forced by gangsters and riot police to leave their houses, and those who choose to fight move to Myeongdong Cathedral for a year-long sit-in before buying land in northern Bucheon (in the part of Gogang-dong that reaches south of the Gyeongin Expressway, to be exact). There, the city council decides that, with the Olympic torch driving by soon, their temporary housing must be removed, which is done by force, and they're forced to move yet again.

The video can be viewed here, while more information on how the director came to make the film can be found here.

It should be noted that Gogang-dong, where they moved to in Bucheon, will become a new town there; as well, many of the people who had moved to Sanggye-dong had come, years before, from Cheonggyecheon when the 'cardboard shacks' built along its sides in the 1950s were destroyed when the stream was first covered in 1960, which makes clearer just how continuous the movement of the poor from the centre to the periphery was.

Sanggye-dong, of course, became covered with apartments in the aftermath of the destruction of the neighbourhood. If you're curious as to why so many apartment complexes can be found in Korea, the following presentation is worth your while.

On April 5th, 2007, the Korea Society hosted an Arts program titled "How Did Korea Become a Land of Apartments" with Valerie Gelezeau, associate professor of Geography at Marne la Vallee University in France and author of The Republic of Apartments. Gelezeau explained how South Korea has transformed from a country of single-unit housing to one where apartment living is the dominant paradigm. Gelezeau believes that in addition to economic and demographic factors-such as a growing population and a shortage of buildable land-this change has been driven by cultural factors.

More on Gelezeau can be found over at Hunjangui Karuch'im here and here, as well as in this Chosun Ilbo article, and in this review of her book (translated in Korean as The Republic of Apartments).

A podcast of her presentation can be found here.

On another possible French-Korea connection, I couldn't help but think of this: 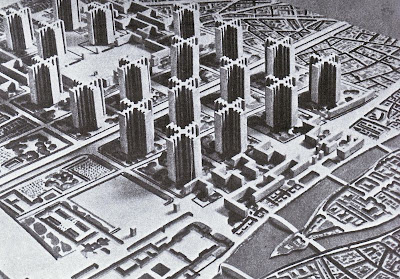 Above is a maquette of Le Corbusier's 1925 Plan Voisin, which planned to raze central Paris and replace it with ranks of towers (from The Situationist City). Such an idea is rather popular in Korea, especially in Seoul.


While on the topic of multimedia, B.R. Meyers presentation for the Royal Asiatic Society a few months ago can be watched over at Korea.com, specifically here. In it he looks at North Korea's view of the world through its propaganda, and, very interestingly, illustrates the link between colonial era pro-Japanese propagandists and the writers of early North Korean propaganda. It's well worth a watch if you have an interest in this sort of thing.

Oh, and the 5 dvd Shin Sang-ok Collection is out now. I'm looking forward to it.
Posted by matt at 2:18 AM