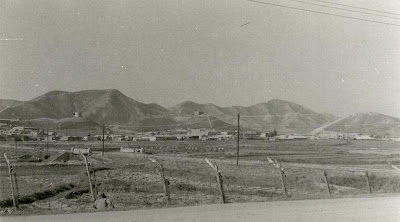 I was looking up some information on Ascom City, a former US base in what is now Bupyeong-gu in Incheon (built by the Japanese, and part of which still seems to exist today, according to Google Earth) when I came across this Time Magazine story from March 10, 1958, titled "Slicky Boy". A few excerpts:

For many of South Korea's poor, stealing from the U.S. Army is a trade and a livelihood. They steal from PXs and officers' homes, raid railroad yards, pilfer from trucks on the move, and diligently bleed oil pipelines (last year's losses were 1,500,000 gallons, enough to carry one tank company 22,400 miles). But after U.S. soldiers on guard duty, potshotting at intruders, killed several innocent bystanders, General George H. Decker ordered: "No more shooting." The thieving went on, the 40,000 men of South Korea's police force seemed unable or unwilling to catch a single thief, and the U.S. Army chafed with frustrated exasperation.

The article then describes the treatment a 14 year old thief received at the hands of his captors at Ascom city, which involved a beating, smearing with coal tar, and a helicopter ride (in a crate) to Uijeongbu so he could walk home.

Bursting with fury, Korean newspapers labeled the incident a "vicious lynching," demanded a status-of-forces agreement that would allow Korean courts to try U.S. servicemen. General Decker hastily expressed regret at the treatment given the boy, "even though he was caught in the act of stealing" (a fact most of the Korean newspapers failed to mention), and promised "appropriate action."

I liked the "unable or unwilling" police, the "fury" of the newspapers, and their ommission of the boy's crime - things which don't sound so foreign almost 50 years later. As for SOFA, there wouldn't be a US-ROK SOFA until 1966 (according to this).

Oh, and numerous photos of Ascom City, Seoul, and other places in Korea taken in 1958 can be found here, while it's location can be seen on this map (the yellow patch between Incheon and Sosa).
Posted by matt at 3:27 AM

See nandupress.com for new book about Ascom, Sin-Chon, circa 1973.
Tim