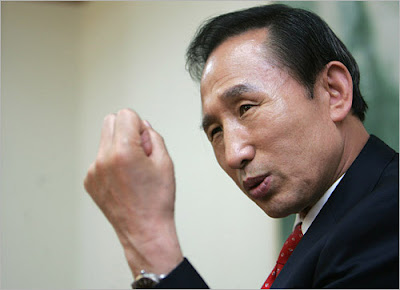 So Lee Myung-bak has finally announced his candidacy and presented his platform.

"Whether Korea is to make a leap or stagnate will be determined in five years. I will make Korea a top-class country with creative leadership,'' Lee, 66, said after registering his candidacy with the National Election Commission.

Earlier, Lee, a former CEO of Hyundai Engineering & Construction, presented what he called a "747 plan'' as a campaign pledge. He pledged to achieve seven percent economic growth, increase per capita income to $40,000 and make the nation the seventh largest economy in the world. He said labor reform, budget saving and his leadership will contribute one percentage point, each, to the current 4 percent economic growth rate.

"747". Catchy. Lee has been manouvering his way towards the presidency since before he was elected as mayor of Seoul in 2002; he essentially used that position as a stepping stone to the presidency. Cheonggyecheon was meant to seem environmentally friendly (and hey, Time bought it) and it was supposed to be done in 2 years in order to show people that he was a 'can-do' leader, much like Park Chung-hee (I'm not the only person who thinks so - though in the last photo he looks more like a thinner Kim Jong-il - and in some of these photos he reminds me of the paintings of Kim Il-sung's 'on the spot guidance'). What wasn't often mentioned was that Cheonggyecheon was essentially the starting point of the redevelopment of large swaths of the city center; in fact, the SNU professor who came up with the idea of uncovering Cheonggyecheon was, when he became assistant mayor, arrested for taking bribes to raise height restrictions in the Cheonggyecheon area, something that should symbolize the entire project. Lee went on to finish the stream successfully and it was eventually named the best 'product' of 2005. It cost 380 billion won.

The main aim of his new town plan, which would see 25 new towns built across northern and south-western Seoul (with 25 more under new mayor Oh Se-hoon) was to create balanced development between northern and Southern Seoul and cool property prices, but instead it has pushed property prices up in the areas to be developed, leading quite literally to the "Gangnamification" of these areas. Note that the first three new towns were to be finished in 2007 - right before the elections. Unfortunately for Lee, these have fallen behind schedule. The 25 new towns are projected to cost 25.5 trillion won.

In another construction related episode, Lee's recent trip to the Middle East was to remind people of Hyundai's accomplishments there in the 1970s under his leadership.

And then there's his canal plan, which he's finally unveiled.

On Monday, Lee's advisory group unveiled a draft of the waterway project at a symposium in Seoul. "The waterway will be 3,100 kilometers long and consist of 17 routes. It will take four years to build and will cost 14.1 trillion won, said Jo Won-cheol, a professor of Yonsei University who belongs to the group.

Professor Chun Taeck-soo of the Academy of Korean Studies who is also a member of the group, said the canal would bring positive effects to the tourism industry. "Once the Gyeongbu canal is constructed, 15 sightseeing areas will be established which can expedite tourist development,'' he said.

A year old article about this canal can be found here. Here's the plan for the Gyeongbu (Seoul - Busan) canal, which seems to reflect the development patterns of the Park era, which ignored Jeolla province in the southwest: 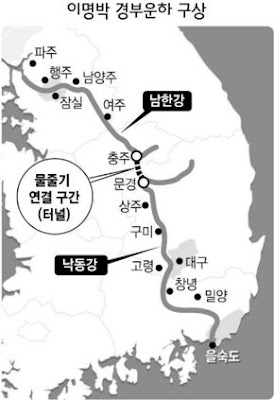 Here's the plan for the Korean Peninsula canal system, which will connect to canals in Jeolla province (which is not an obvious ploy to get votes there) and North Korea: 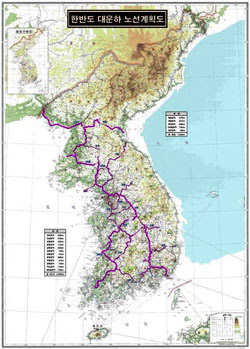 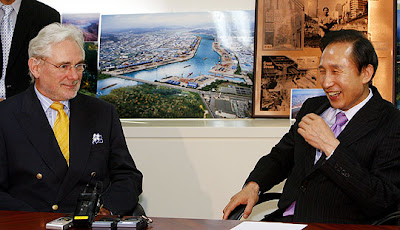 The Dutch ambassador and Lee - notice the Time article

Lee met with Hans Heinsbroek, the Dutch ambassador to Seoul, and public servants from the Dutch Waterways Department to discuss matters regarding the project at his campaign headquarters in downtown Seoul. "The Dutch visitors visited the Han and Nakdong rivers, which the canal will connect,'' Lee said. "They told me that Korea has the location requirements for the waterway and can expect economic benefits through the construction of a canal.''

During his visit to Germany earlier this year, he visited the gigantic Rhein-Main-Donau Kanal and met experts in canal construction to discuss the feasibility of the project.

I've criticized this project before (which would mean demolishing and rebuilding existing dams to create locks - much as Cheonggyecheon involved demolishing an expressway built by Hyundai decades earlier), and there's a great article here which declares the project to be economically unviable and a possible source of pollution. The writer also has this tidbit about Cheonggyecheon:

The people's enthusiastic response to the restored Cheonggye is a reflection of growing interest in and desire for a cleaner environment, even if the stream is just a manmade facility that requires a volume of electricity enough to serve 3,000 households everyday to pump in water.

On the campaign trail, however, Lee's been pissing off lots of people.

At a lecture held on May 7 at a Seoul hotel by the Seoul Financial Forum, an advocacy group, Lee said of a visit to Indian software company Wipro in April that he "found that its workers who were university graduates did not consider themselves as ‘laborers’ and reportedly didn’t get overtime allowances. As far as I know, they don’t form unions because they do not have the mindset of being laborers. It seems they have strong pride," Lee continued, portraying the non-unionized workers’ attitudes in a positive light.

Then he managed to anger the disabled:

Asked about his position on abortion in a May 12 interview with the Chosun Ilbo, Lee said he "is basically opposed." "But there are unavoidable cases," he said. "Such as if the child is going to be born into the world handicapped, for example. It seems that abortions that are unavoidable have to be tolerated."

This comment led to protests by disabled rights groups. While I think of it, there's more information about diabled rights here. The article lists a few other controversial comments:

Consistently the leading candidate for president in opinion polls, Lee has frequently made comments considered controversial. He recently said that people who join labor unions "have no pride" and that people who were part of the democracy movement in the 1960s and 1970s "played around with not a care in the world and now live off the legacy of their activities."

Maybe that's why he didn't go to Kwangju on the anniversary of the uprising this year, unlike every other presidential hopeful (he did take part in a 5.18 marathon in Seoul a few days earlier, however). At least he didn't hang out with Chun Doo-hwan during the anniversary this year. Though this article reveals that "His continued mistakes in the words he chooses have caused his aides to worry over his outspoken style of speaking", he has said that "he will not change his speaking style even though inappropriate word choices in the past have got him into trouble."

I guess that means his campaign should continue to be very entertaining.
Posted by matt at 4:18 AM