A Distant and Beautiful Place 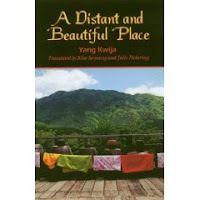 A comment upon my post about Bucheon's history made me aware that there is a collection of short stories by Yang Kwi-ja titled "Wonmi-dong Saramdeul" ("Wonmi-dong People"; Wonmi-dong is a neighbourhood in Bucheon north of Bucheon station and west of Wonmisan, one of the mountains which divides Bucheon from Seoul). This short story collection has been translated into English as "A Distant and Beautiful place", and the publisher has made the first story available on the internet as a pdf here. An informative review of this book by Stephen Epstein can be found here. Among the many aspects of the book he discusses is the difference in the English and Korean titles:

The title of the English version, A Distant and Beautiful Place, rests upon an astute decision to apply a translation of the first story’s title, Mŏlgo arŭmdaun tongne, to the whole anthology. Not only is A Distant and Beautiful Place more evocatively resonant in English than a literal rendering of the original Korean title, the phrase draws etymological attention to the Chinese characters that compose the name Wŏnmi-dong (wŏn, “far”; mi, “beautiful”). The transference to their native Korean equivalents in Mŏlgo arŭmdaun tongne (mŏlda, “far”; arŭmdapda, “beautiful”) brings out the productive dissonance in having Wŏnmi-dong as the stories’ setting and encourages the reader to reflect upon the multiple ironies involved. Wŏnmi-dong, psychologically distant from Seoul, yet a mere subway ride away, becomes a site that offers a melancholy beauty of its own: here urban sprawl collides with a tranquil agrarian past; here hopes go hand in hand with disillusion, and the invocation of dreams inevitably conjures up their failure. The title also underscores the central role of the neighborhood itself; while several characters reappear throughout the stories, the overall protagonist of the collection is clearly Wŏnmi-dong. And although each tale is firmly rooted in a sense of place, firm localization does not mean stability. Despite the constant presence of Wŏnmi-san, the mountain that looms above, Yang notes repeatedly the changing face of this suburban landscape, as fields are whittled away to make room for housing and retail developments, and new stores replace others that fail.

There aren't many fields to whittle away nowadays, as the picture below shows; Wonmi-dong is in the center of the photo, and the mountain behind it is Wonmisan. For a closer view of the neighbourhood, Joe over at the Paint Roller Blog has posted a number of photos. 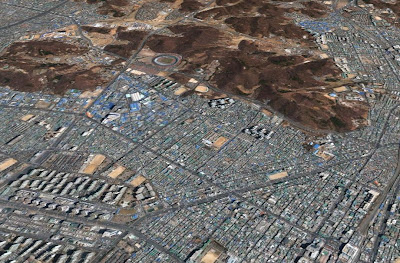 There are no more fields to whittle away anymore. Now they whittle away old neighbourhoods. Behold what is to become of Wonmi-dong: 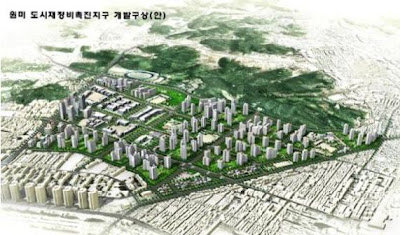 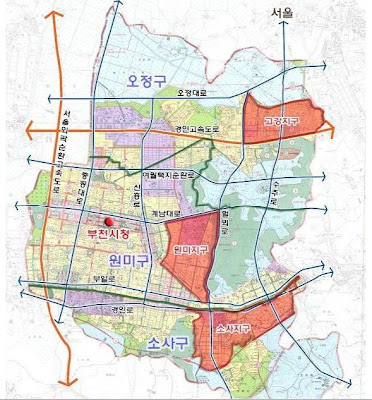 There will be three new towns: Wonmi, Gogang, and Sosa (this has been in the works since at least last summer). While the appearance of a new subway line always guaranteed that there would be redevelopment near the subway's path, this is a bit much. I can understand redeveloping the nearby factory areas to create new residential zones (and the northern part of the Wonmi new town will see that happen) but why the rush to redevelop so many existing residential areas, especially when it's only been four years since the 3 square kilometer Sang-dong development was finished? 30 years after Yang Kwi-ja's collection was published, in which a family forced to move around Seoul in search of cheap rent finally moves to Wonmi-dong, those now renting in Wonmi-dong will be forced to move on.
Posted by matt at 3:08 AM