Meandering musings on the Kwangju Uprising 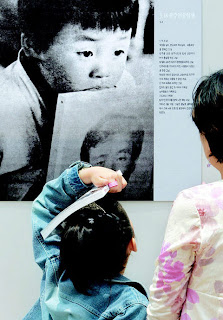 I found the description of this photo interesting:

A young girl looks into the eyes of a boy just about her age, in a photo on display in front of Seoul’s City Hall in the commemoration of the democracy movement which started around May 18, 1980 and was crushed by the military. The boy in the photo (Jo Cheon-ho, now 32 and a Gwangju City Hall public official) holds up an image of his father, who was shot by the military in the violence that May.

This article in Hankyoreh, which describes a display of watches of dead victims in Kwangju, is interesting as well:

The other two watches on display also tell of families’ sorrow. One belonged to Jeon Yeong-jin, who was also 17 when he was killed by a government soldier. On May 20, Jeon was beaten up by government solders while he was on his way to a bookstore, but on May 21, he quietly slipped out again to join the protests; by about 2:00 p.m., he had been shot in the head and lay bleeding in the street. His watch stopped that day.

Since then, Jeon’s father Jeon Gye-ryang and mother Kim Sun-hui have also been at the forefront of the effort to restore honor to the victims of Gwangju. Two of his high school classmates, Song Young-kil and Kang Ki-jeong, are now lawmakers in the pro-government Uri Party.

The fact that the son of a victim, and classmates of a victim, are now a part of the government is interesting. Those that once were victimized by the government and opposed it are now a part of it. Arguably, these men are luckier than other survivors, as much of what Linda Lewis has written has shown; in her book Laying Claim to the Memory of May (and other essays) she describes the often miserable lives wounded survivors have had, and the ill effects the loss of a family member tended to have. As she notes in her essay "From Heroic Victims to Disabled Survivors: The 5-18 Injured after Twenty Years" (in the book Contentious Kwangju), as of 1997, 120 additional victims had died. 69 were gunshot victims in their twenties and thirties; only 17 were in their sixties or seventies. I'm not sure how many have died in the ten years since. I'm reminded also of her personal remembrances of people disappearing in Kwangju throughout the following summer months, and how many of those people had to live with physical and psychological injuries due to the torture they underwent. The immediate repercussions of the uprising were certainly not limited to May 27, the day the troops ended the uprising.

In the comments over at Dprk Studies (where I had my annual discussion about the Kwangju Uprising with usinkorea (who was kind enough to send me numerous New York Times articles from the time of the uprising)), the question of chronology came up; here's a very basic overview of the uprising:

May 18th: Paratroopers secure universities; students demonstrate in front of universities and move downtown, troops move downtown and attack protesters and bystanders. Anger over this leads to more protests the next day.

May 20: More paratroopers arrive. Even larger protests with many citizens taking part. In the evening the protest by taxi and bus drivers allow the citizens more control of the streets and puts troops on the defensive. Shooting by soldiers at the train station late that night results in 20 casualties. Citizens burn MBC, KBS, and the tax office.

May 21: Troops retreat to Provincial Hall. Citizens demonstrate in front of the troops there. Troops open fire there around 1:00 pm, as well as in front of Chosun University, and later throughout the city as they retreat to the suburbs. Protesters get guns from armories in and outside of the city (different accounts say they did/did not engage the troops that day). Troops retreat to the edges of town and guard the main roads in and out of town. As Linda Lewis writes: "[On May 21] there were 62 official dead, most (54) killed by gunshot, the majority (66%) in the vicinity of the Provincial Office Building". Many, many more were wounded.

May 22 - 26: Some citizens form committees to hold discussions with the army. Guns are collected, and the streets are cleaned up. Large rallies are held calling for democracy and the end of martial law. On May 25, students refusing to give up their guns take over the committee and when talks break down, choose to fight to the end.

Troops on the outskirts of the city

The untold story of the days between May 21 and May 26 is of what happened on the outskirts of the city. Though many foreign reporters made it through the semi-permeable perimeter the military had set up outside the city, none witnessed the many killings which occurred there. Soldiers fired on cars, trucks and buses leaving or entering Kwangju (sometimes at night) and other passersby, killing at least 65 civilians and 12 soldiers (that's right - on two occasions soldiers opened fire on other military units, resulting in 12 deaths and around 40 wounded).

May 27: In the pre-dawn hours the military move into the city and attack the Provincial Office and other locations. The official number killed that day is considered to be 26, though troops quickly carried bodies away.

Of the total official figures for the dead (191 known fatalities - 164 civilians, 23 soldiers, 4 policemen) 62 died on May 21, when troops opened fire, while at least 64 died on the outskirts May 21-25, and 26 died during the final battle. This adds up to 152 out of 164, leaving 12 dead between May 18 and May 20. The government, however, recognizes 47 people to be officially missing, though around 100 more people's families have petitioned to have their missing loved one recognized as a victim. It's hard to know how many more than the official number were killed (Lewis suggests a reasonable estimate would be 400-500 in total). For example, the two bus shootings on the outskirts of the city on May 23, which killed 28 people, are only known of because one high school girl survived and lived to tell the tale. While it's likely that many bodies were taken away and buried in the vicinity, this comment in Tim Warnberg's essay "The Kwangju Uprising: An Inside View" ( here; the download button is at bottom left) is rather unsettling:

Who knows if these bodies have ever been accounted for?

In the discussion at Dprk Studies the question of US responsibility came up; I wondered how much the use of language like "approve" by people within the US government at the time (when it wasn't an appropriate word), and Chun's duplicity (in making it look like the US were eagerly supporting him) had in leading people to blame the US for the deaths during the uprising. Of course, a few paragraphs aren't enough to even begin to analyse such a topic - perhaps another time. A good summary of some of the issues involved can be found in Mark Peterson's essay "Americans and the Kwangju Incident: Problems in the Writing of History", from the 1988 book The Kwangju Uprising: Shadows over the Regime in South Korea (download it here; the download button is at bottom left). Peterson was in Seoul during the uprising and interviewed ambassador Gleysteen and general Wickham in the mid 1980s; the essay takes the main points from their books and communicates them efficiently.

Speaking of history, the Joongang Ilbo reported this:

On the anniversary of the event, the Ministry of Administration and Home Affairs yesterday released for the first time comprehensive and detailed official data on the Gwangju uprising in 1980, the bloodiest chapter in the nation’s modern push for democracy.

The National Archives and Records Service, which is under the ministry, opened its database to the public to mark the 27th anniversary of the beginning of the uprising. The material was compiled in 70 volumes published by the city of Gwangju

Add this to the - I'm not sure how many - volumes of National Assembly testimony from the late 80s (pictured below, at Yonsei University Library), and you have quite a bit of reading to do. 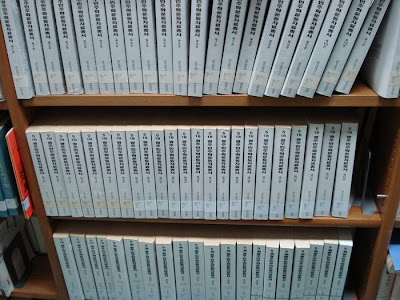 Oh, and "May 18" ('Hwaryeohan Hyuga', or 'Splendid Vacation' - the code name of the paratrooper operation on May 18) is set to be released on July 26. 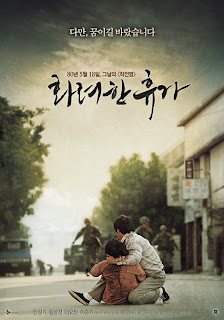 A trailer can be found here. It looks a little... made for tv-ish, or at least the production values do. I think Jang Sun-woo made a good decision in his movie about the Kwangju Uprising ("A Petal", 1996) in filming the demonstrations in black and white; perhaps even the "Sandglass" tv series, which portrayed the uprising with the help of documentary footage, may look better, though I guess I shouldn't judge the film by a 2x3 inch trailer. It should be interesting to see how the uprising is portrayed now (ten years after "A Petal" and "Sandglass"), seeing how Korea, and how Kwangju is remembered, has changed quite a bit since then.