Children's Day is once a year 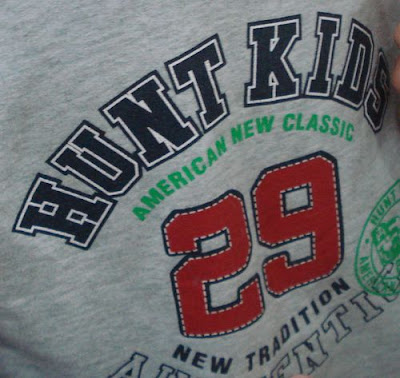 Perhaps not the best shirt to wear on Children's Day...
Children's Day was on the weekend (running a bit late, aren't I), and Robert Neff over at ohmynews has an article which reveals a bit of its history, which is well worth a read. It contains excerpts of a depressing Time Magazine article about Children's Day in 1951, during the war. A similar story, with a happier end, can be found here, about Sgt. Werner Krenzer and his attempts to aid homeless children in Seoul, while a more recent article about Krenzer can be found here.

The Hankyoreh makes no attempt to cheer us up:

Upon getting her grade report card, Ji-eun (not her real name), a fifth grader at an elementary school in Gangnam-gu, first thought of a hamster which she recently received as a birthday present. Her mother does not like animals, and had screamed when she saw it. So she said she could keep it on one condition, that she score 100 percent in all her subjects. Ji-eun got nine questions wrong, though, and now she has to worry what her mother is going to say when she gets home.

The woes of a number of students are described in the article (another Hani article looks at how abuse of collect calls on cell phones is driving many teens (and their families) into debt). The mention of Gangnam reminded me of the confluence there of both the real estate bubble and the hakwon industry, and led me to wonder if an area that has numerous apartment buildings, and in which Korea's tallest building (which is, of course, an apartment tower) can be found, is the best place to have arguably the most pressured children in the country living. It often fascinates me to see the pull that the vortex of Gangnam has (if I may use Gregory Henderson's concept) among parents that I know, who are happy to raise their children in Banghwa-dong up until, say, grade 3 or 4, but after that are considering moving to Gangnam so that the children can go to "good schools" and "good academies", though I have to admit I've never been able to get any clear answers as to why those schools are "good." The best school in my neighbourhood seems to have that reputation because it gives the students the most homework. I can't remember if it was that school or another where a teacher hit the (grade 4 or 5) students for every wrong answer they got. Of course, hitting seems to be a motivational technique for student atheletes as well - 70% of them, according to this article.

Oh, but Children's Day should be a happy time. Sorry. How about a heartwarming story about a 14 year old girl who learned to fly so she could be closer to her mother in heaven? [cached here].

I just feel sorry for my students who spent Children's Day at home playing computer games, whose parents had nothing else lined up for them to do...
Posted by matt at 3:58 AM