Near my house a tall building allows the view below - or it did two years ago. The odd, almost 'L' shaped building below housed a shipping company and a raw fish (hoi) restaurant. The shipping company gave way to a food company a few months ago, and the hoi restaurant gave way to a duck restaurant, which then turned into the pile of rubble you see below. Note also in the first photo the long, red, four storey housing units on the far side of the street (at upper left); they were torn down a few months ago, to be replaced by the construction site you see now. 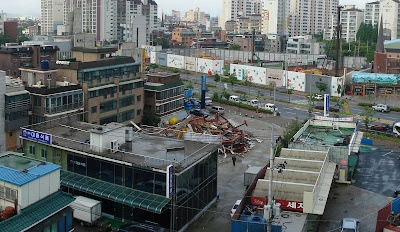 As you'll notice above, the entire western section of the building was sheared off and torn down. As I was walking by last Monday I heard the sound of smashing glass and went to investigate. The windows and frames were being smashed and pulled out. The pile on the right is waiting to be taken away.

By Wednesday a few of the main girders had been cut off and removed.

On Thursday morning they began tearing down the building.

It was torn down by the end of the day, and this was the view the next morning. 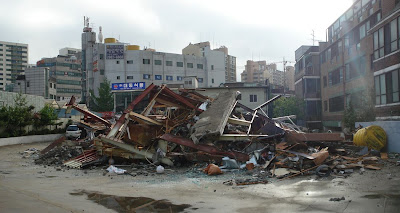 Friday afternoon, several machines were at work sorting the scrap metal from the rubble and taking it away to be recycled, while other machines scooped the rubble into waiting trucks (who knows where they take it). 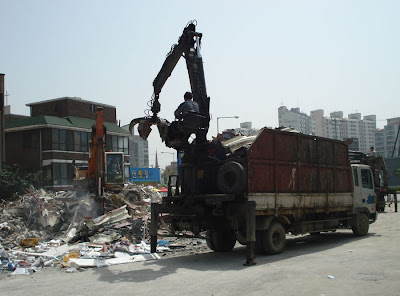 By Friday evening the task was almost finished. 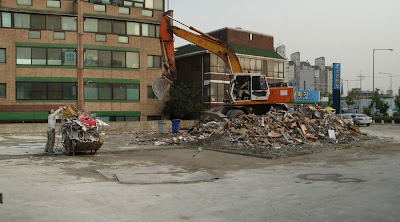 On Saturday morning there was no trace of that wing of the building. 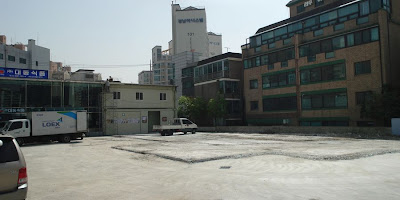