City and country, education and marriage

In the comments to this post, Mark Russell notes that the number of students as a whole has been dropping for some time. Right on cue, the Joongang Ilbo reports that a school in Dongdaemun-gu in Seoul is closing for lack of students. It then lists some statistics:

During the past 25 years, the number of students across the nation has dropped by 2 million even though the country’s population has increased by 10 million, the Korean Educational Development Institute announced yesterday. The number of students will continue to decline at a faster rate, the institute predicted, meaning a loss of another 2 million students by the end of 2017

I never would have thought that a Joongang Ilbo article [which will crash Firefox, by the way] about a TV show where two families swap moms for a week would turn out to be so interesting. The reason is that the families are from Seoul and rural Chungcheongbuk-do. While the mother from Seoul, who has one daughter, was overwhelmed by the amount of food preparation and laundry she had to do for a family from the countryside with nine children, the mother from the countryside, while now having theoretically one ninth of her normal workload, had some very interesting observations to make about the differences between her (traditional style) family and life in Seoul.

“I thought it was an opportunity for me to take a break from the huge family that I manage,” Lee said. “However, taking care of a young daughter alone wasn’t an easy task. At home I would let the older children take care of their little brothers and sisters, but here I had to attend to a little girl at all times, and I hardly got a break.”

She also realized how family life in the city has lost traditional family values. “In the past family meant warmth, consideration for one another and enjoying each other’s company,” Lee said. “This week, I learned that families in the city respect each other’s world. Each and every person has their own thing going on and they rarely interrupt other people’s private space. In the long run I believe such a lifestyle would end up deepening isolation and loneliness.”

Or it might give kids the time and freedom to pursue... odd interests on the internet, like that group of 8 - 13 year-olds caught running an S&M website. Obviously, that's a extreme tip of the iceberg, and what she's describing is a very middle class version of life in Seoul. There used to be two families of kids down the street from me who would play outside together, with the eldest caring for the youngest while the parents worked; this pattern of life hasn't disappeared in Seoul by any means, but it's harder to maintain in middle class families with 1.5 children. Several people I know have moved to Banghwa-dong because their parents (or parents-in-law) live there and can take care of their children while they work.

“I missed having people running around the house,” Lee said. “I was really bored during the day.” She worried that the lack of conversation within the family would later lead to a breakdown in communication between parents and children, which she believes many families living in the city suffer from.

Lee said it wasn’t her first time living in Seoul. “Before I was married to my husband I worked in Seoul. But coming back after so many years I realized how complicated every thing is,” she said.

It's interesting to think of this in terms of Seoul's growth, especially considering the fact that according to this article, "more than one in two people in the country will be living in the capital and surrounding Gyeonggi Province by 2011." This is nothing new, of course, as Seoul and its surrounding area has been experiencing massive population growth for quite some time now. 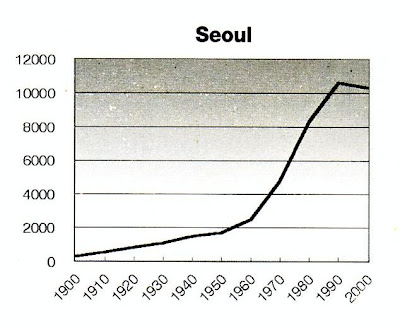 Seoul's growth began to take off from around 1960 (when Seoul's population was around 2 million) and peaked in the late 1980s (at more than 10 million) before decreasing slightly as several 'new cities' were built in nearby areas in Gyeonggi-do. This, of course, was due to millions of people moving from rural areas in the provinces to Seoul, which led Seoul's uncontrolled growth as it, ironically, began to swallow the surrounding farmland which was similar to that which the newcomers had come from. Numerous illegal squatter villages and hillside settlements grew up within the city and then were pushed to the outskirts to make way for redevelopments, until those areas on the outskirts were then redeveloped, a process which continues today.

One reason to come to Seoul was not just for employment opportunities, but was also for the education facilities. Of course, now, with almost half of the population nearby, those educational opportunities now exist in just a handful of neighbourhoods (how many parents have told me they'd like to move to Gangnam (or maybe Mok-dong) by the time their child is in grade 5 in order to take advantage of the schools there?) and the same migration that once took place within Korea as a whole takes place within Seoul itself.

The mother from Chungcheongbuk-do reflects on the differences between the two households regarding education:

Lee at first was surprised at the enormous amount of study put in by Da-hye, the seven-year-old girl. After kindergarten, Da-hye would study piano every day. And once a week Da-hye went to private institutes to study Chinese, English and ballet.

“My children didn’t even go to kindergarten,” Lee said. She has no desire, however, to change her education method. “I tell my children that family comes first. Getting good grades is important but life isn’t all about getting high scores,” Lee said.

Unfortunately, with so many people moving to the cities in general, and Seoul/Gyeonggi in particular, schools in the countryside are finding it harder to give their students a decent education. 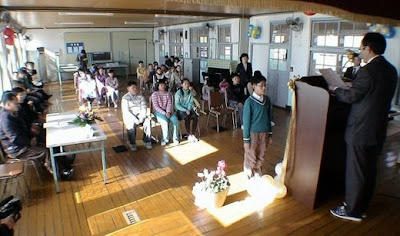 The last graduation ceremony of a rural elementary school in May 2007.
The school was due to be closed for a lack of new students. [Hankyoreh]
As the article tells us,

The number of students in farming and fishing villages dropped by 10.4 percent between 1999 and 2004. As a consequence, schools are being forced to close. Up to 2,266 schools in those villages have been closed out in the past decade. The future of about half of remaining 5,163 schools also is unclear, as the government plans to close schools with 100 or less students.

It goes on to describe the plight of Neungjubuk Elementary School in Hwasun, South Jeolla Province:

[P]resently, the school’s two double-story buildings hold only about 50 students. The elementary school only has five grades instead of the usual six, because the 2nd and 3rd graders have been combined into one classroom. Yun Jeong-hyeon, a teacher, said, "Once there were over 700 students. However, as people have left the farming village, the future of the school is at stake."

The movement within Seoul towards Gangnam is found in the countryside as well. A nearby middle school "has 20 students in all, less than seven in each grade. This is because parents who can afford the commute take their children to be educated in nearby cities such as Naju and Gwangju." One has to wonder about this draw towards Seoul and other cities. As it essentially guts the infrastructure of farming communities (a school often plays many roles in a small community), starving them of students and funding, will this, in the end, just hasten the migration of more and more people to cities where that infrastructure can be found?

The countryside isn't just being starved of students, of course; it's also being starved of women willing to marry and live there, which is making it difficult for the men living there to find wives. The solution, as is well known, has been to marry women from other, poorer, countries.

[G]overnment statistics show that the number of marriages to foreigners jumped 21.6 percent to 43,121 in 2005 -- 13.6 percent of all newlyweds. The National Statistical Office said 72 percent of international marriages involved Korean men and foreign women. Chinese brides topped the list at 66.2 percent, followed by Vietnamese with 18.7 percent, Japanese with four percent and Filipinas with 3.2 percent.

Many of these women, of course, are moving socio-economically upward by moving to Korea, much as the Korean women who previously lived in the countryside did when they moved to the city. What's interesting is that international marriage, which could be considered an indicator of cosmopolitanism, is taking place to such a large extent in the countryside. These unions will lead to a large number of mixed race children attending the aforementioned dwindling schools in the near future. What happens as that generation grows up may prove to be quite interesting.
Posted by matt at 2:39 AM

The trouble with that statistic is that it does not take into account the general decline in population of school-age children. The numbers have been dropping for a while... not as fast as in the country, I would guess, but it is a nationwide trend.

Similarly, Korea already has way too many universities for the number of young people in that age group and the situation is growing worse.

Matt, your articles are always fascinating...reading over your last few contributions, I really regret that I haven't caught up on your blog in a number of months. Keep up the good work.