Visits to those who served in Korea

ROK Drop posted last week that singer Insooni had tracked down a soldier who had befriended her 40 years ago when he served in Korea in 1972-73. The Chosun Ilbo posted an article and video of their reunion yesterday, and a report here has two photos taken in 1973 of Ronald Lewis (left) and 14 year old Kim Insoon. 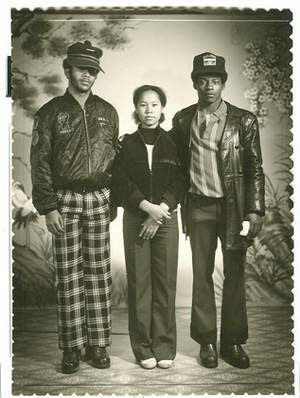 What a great photo. Five years later Insooni would be a member of the disco group Hee Sisters, who recorded from 1978 until the mid 1980s. As Mark Russell noted, an anthology of their music remixed by DJ Soulscape should be released this year, a sampling of which can be listened to in this video, which also has lots of photos:
Note that in most of the photos her hair is always short or covered, as mentioned in this article. There's also a live performance from 1979 on Youtube here.

Oh, and it was nice to see President Lee visiting the Korean War memorial and the home of an Ethiopian Korean War veteran in Addis Ababa the other day. The latter was perhaps a bit photo-op-y, but a nice gesture nonetheless.
Posted by matt at 12:28 PM

Awesome picture, great post. I'm endlessly fascinated by the SK of the 1970's. So many contradictions.

Also, I'd pay a few thousand won for those plaid pants. Hawt.