A bunch of English hagwon and university instructors and university students have been caught by police in Busan and Seoul for taking narcotics or habitually smoking marijuana.

Busan District Prosecutors' Office violent crimes division (Chief prosecutor Yang Ho-san) announced on the 22nd that 8 people including American English hagwon teacher P (30) had been caught for violating the drug control law, with 4 being arrested and detained and 4 being booked without detention.

P is accused of smuggling 3.58 grams of marijuana from the US through international mail on February 5.

Also, three Korean Canadian English hagwon instructors including a Ms Park (22) have been charged with smuggling through international mail in April or May 2.84 grams of ketamine and taking it ten times at clubs in Seoul and Busan.

Mr. Park (33), a university instructor, has been charged with buying ecstacy and marijuana while traveling overseas from last October to this April, bringing it to Korea, and habitually using them.

In addition, three students enrolled at a university in Busan were arrested or booked without detention for smoking marijuana in March.

The pot or ecstasy busts will surprise no one, but I haven't heard of too many ketamine busts before.

About the arrests, the Busan Ilbo added this:

An official from the Busan District Prosecutors' Office said, "Cases in which suspects have learned about drugs while living overseas and have, with no particular awareness, brought drugs to Korea using methods such as international mail are increasing." "There have been no small number of cases in which university instructors and of course university students have learned about drugs like marijuana through language training and after returning to Korea have continued smuggling and smoking, which has revealed a need for a continuous crackdown."

Similar sentiments appeared in a July 13 Medical Today report about the availability of new kinds of drugs to children. One paragraph reads:

Section chief Yun Heung-hui explained that "The recent increase in new kinds of drugs has been greatly influenced by foreign instructors and young people who spent their childhood years studying abroad." "This is because sometimes they take the drugs they used abroad like yaba or ecstasy to Korea and spread it among their peers."

Here's the photo at the top of the article: 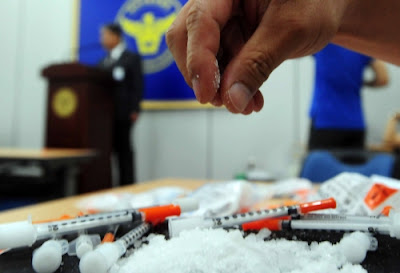 And here's the advertisement that's quite close to the above photo:

In the July 20 YTN story of the US soldiers busted for selling spice in Itaewon (a similar article is translated here), it's mentioned that a former English instructor named Mr. Kim (29) had been arrested, but there is no mention of his nationality, so one would assume he's Korean.

On July 20, NoCut News reported in an article titled "From housewives to English instructors... Drug ring arrested for selling and using" that a Mr. Hong (52) was caught after smuggling 2.2 billion won worth of meth into the country from China by using a freighter. It was brought in between February and July and distributed to middlemen in the capital area and Busan who then distributed it to small time dealers throughout the country. 25 people were arrested and detained and 17 were booked without detention.

The article says that "Among the 17 users who were caught were a former university instructor and native speaking instructor, a taxi driver and a housewife, and their ages varied, ranging from those in their 30s to those in their 50s."

Police said that among the users caught was Mr. Kim (47) who drove customers around in his taxi while high and a farmer who ignored his family after taking the drugs. Police have issued warrants for ten others who fled overseas.

And this Marmot's Hole post summarizes a July 21 KBS article about Gyopos being busted for growing and selling marijuana. A Donga Ilbo article on the same topic reports that "they smoked the marijuana they harvested and of course sold it to foreign students or businessmen who had come to Korea, as well as hagwon instructors." The nationality of the hagwon instructors isn't mentioned. (I just realized Robert updated that with a summary of the article I translated at the top of this post. Oh well.)

I hope that's not actual methamphetamine the officer is handling. Canada's Department of Toxic Substances Control warns that's dangerous since meth can be absorbed through the skin. "Medical Today" should have posted a "things not to do if you stumble on a clandestine meth lab" warning label beneath that shot.

I'm impressed by the dogged emphasis on foreign countries and now learning English as the source of contamination by drugs. It seems to suggest that limiting foreign influence and exchange like North Korea does would provide a solution, except according to the Chosun Ilbo "Crystal Meth Use is 'Rampant' in N.Korea" and apparently "N.Korean Meth is 'Flooding Asia-Pacific'".

"Continuous crackdown." You mean a War on Drugs(tm)?