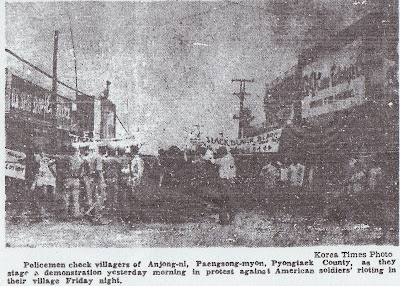 On July 11, 1971, the Korea Times published the following story about an incident in Pyeongtaek which occurred July 9 (click to enlarge): 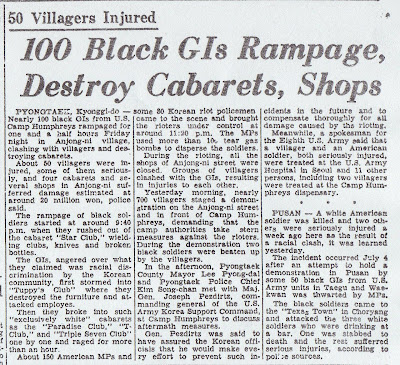 You can find discussions of such race riots on sites which have stories of former soldiers who served in Korea in the early 1970s (such as the second and fourth stories here, which mention incidents in the camptown outside ASCOM (near Bupyeong in Incheon)), but it's a chapter of history which is not well known. The one described above was the largest that occurred, and, I believe, the one which involved the most Koreans. I don't know if any other such race-related incidents led to demonstrations by Koreans.

The article briefly mentions that the black soldiers were "angered over what they claimed was racial discrimination by the Korean community," but quickly follows the story with piece about an incident in Busan which makes it appear to be a grudge match between black and white soldiers. Note that both the Korea Times and this this Kyunghyang Sinmun article from a day earlier put the number of injured Koreans at 50. A Korea Times article the next day gave a much smaller number:

Again, the black soldiers "meant to clash with white soldiers, but when the white GIs ran away, they assaulted the hall employees and destroyed the furniture," resulting in harm to "innocent Korean residents." Koreans are portrayed again as innocent victims, and no mention is made, as it was briefly in the first article, of "racial discrimination by the Korean community." A closer look at the photo accompanying the Kyunghyang Sinmun article might suggest that "racial discrimination" existed, however: 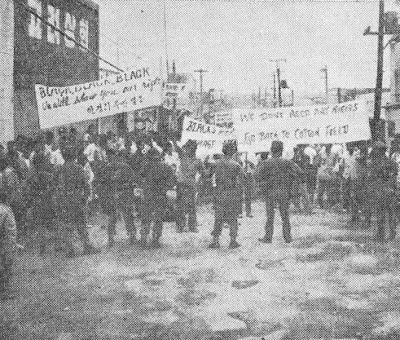 I'll discuss this more later, but it's pretty easy to read the lines "BLACK BLACK BLACK" and "Go back to cotton field" on the placards.

A Kyunghyang Sinmun article from July 13, 1971, published this photo of one of the clubs taken the "investigation into the rampage." 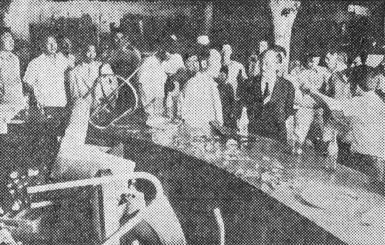 The shops soon re-opened, but the Korean residents now faced a new problem, as this July 14, 1971 Korea Times article reveals: 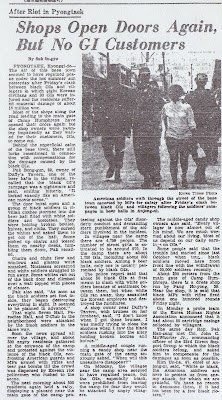 The article again brings up the "meant to clash with white soldiers" explanation, but undermines this by quoting an owner of one of the clubs as saying, "As soon as the black soldiers set foot inside, they began destroying everything in sight. It seemed to be planned in advance." It also brings up the effects of the "off limits" decree, with business owners worrying about the lack of customers.

The next day, the Korea Times published the following report about another disturbance:

Interesting that this incident in Dongducheon is reported as having started when "a Korean boy jeered at a Korean girl walking with an American soldier," something which helped set off a similar incident in 1995. A Donga Ilbo article from a day earlier had published this photo: 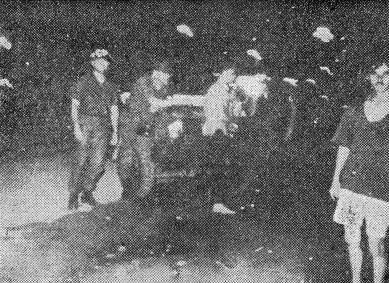 Both the Korea Times and Donga Ilbo (as well as the Kyunghyang Sinmun) describe 200 soldiers as being involved in the incident. A Stars and Stripes article published on the 16th refutes this: 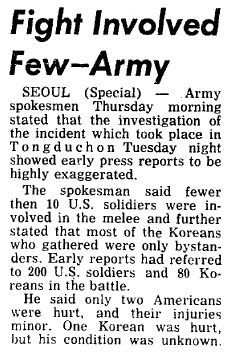 "Highly exaggerated" press reports? Who could imagine such a thing?

Needless to say, the question of why these events - especially the race riots - occurred, and how they changed the way in which the Korean government and the US military dealt with relations in the camptowns, cannot be quickly answered. In the next post, I'll look at Stars and Stripes' coverage of the Anjeong-ri riot and Katherine Moon's analysis of these events.
Posted by matt at 11:29 AM

Thanks for the research on this. Looking forward to more of your digging on the subject.

Would be interested to learn how US military handled the situation. Race relations in the military at this time were very troubled.

For example, how did the US government and military leaders speak to the Korean government about such events. More interesting to me than the obvious use of the press to mitigate a public embarrassment and Korea's bigotry is the way the US would use this as a means to mitigate it's own problems. Know what I mean?

Let's see, 1971 -- the writing was on the wall for the American occupation of Vietnam, Nixon was one year away from sending operatives to break into the Watergate Hotel, the rest of SE Asia was a complete mess, and race relations in the US military were at an all-time low. Also, at least in Vietnam, heroine abuse was rampant.

What a hell of a strange time.

Gary Norris:
As I'll talk about more next time, the main result was the joint Camptown Clean-up Campaign, which is looked at in depth by Katherine Moon in her book 'Sex Among Allies.'

wetcasements:
The Nixon Doctrine certainly plays a part in all of this. Oh, and here's a 1967 article about the first drug bust of a US soldier by Korean police after the SOFA came into effect - for heroin.

This wasn't the only incident Anjeong-ri had. There was a similar one in 1975 between Black Soldiers and the Korean which shut the village down 2-3 days. Racial prejudice towards blacks were definitely on a high scale. Alot of that I attributed to ignorance on the Koreans and prejudice brought over by the good ol' US of A.

I was there for the riots. They started the night before at Camp Howard, then spread. I was the Military Police Desk Sgt at camp Howard when it started. A large black man stationed at Camp Howard from Birmingham Alabama, last name McClelland got drunk in the village, and began beating up Koreans. Three or four at a time, which he had done in the past. Me and another MP went down there and picked him up, and took him back to his unit, and returned to the village to make sure everything had calmed down there. McCleland decided he was going back to the ville after we left. Awhile later back at the MP station I got a call that McCleland was laying outside the gate beaten, and in real bad shape. By the time I got there others had got McCleland in the gate, however the Korean mob had grown to about three hundred people with load speakers, and throwing rocks, demanding that we turn over all blacks on the compound to them. They said they did want the white soldiers, only blacks. As I entered the gatehouse to call Camp Humphries for backup patrols, the Koreans stormed the gate, on trying to hit me in the head with a brick. I stuck a loaded and chambered 45 barrell in his ear, and he took off. When four jeeps loaded with MP's arrived from Humphries, the first jeep drove right thru the crowd wide open and escaped injury. The other jeeps were not so lucky. they were stoned, and crashed into concrete abutments at the gate. We had to medivac several out, one with a broken leg. The Koreans again stormed the gate. By this time the post commander had ordered all units in full gear with loaded weapons and tear gas to the gate. They formed an arc inside the gate weapons drawn behind sandbags if I remember right. The riot kind of fizled out at that point. The following night it spread to Humprhies. At Humphries several sympathizers of the Black Panther movement stole a case of grenades, a couple M60 Machine guns, etc.. The trouble started in the clubs. Blacks stabbed I beleive more than one club manager and destroyed the clubs back in the allies. The Koreans rioted. The black Panther sympathizers began throwing hand grenades at the MP's on the gate. Six hundred rounds of ammo were fired over the Koreans heads to stop them from entering. The gates were shut down for two weeks. Helicopter was the only way in for a week. The following week all traffic was diverted through the CPX area to a gate that ws way around the other side of the base. The village was placed off limits for six months. The post commander said he would starve the village to death, and break them financially. It worked. He made them move the clubs out of the allies also. A close friend was on the gate. I will let him tell you the rest of the story(Bud Knapp) if I can get him in here. He had grenade thrown at him on the gate.