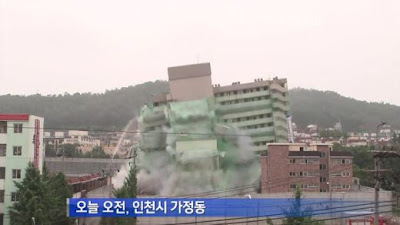 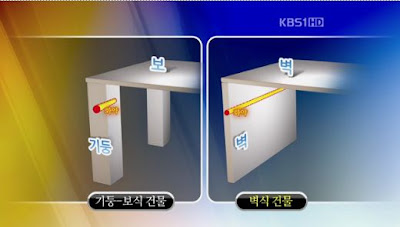 Apparently there is hope that Korea can export the technology. I was curious to see exactly where it was, as it mentioned it was near the Gyeongin Expressway. A quick search on Daum maps turned up a likely candidate - the Sanga Apartment, seen in the center below, which I confirmed through this article:

As it turns out, it was directly next to the expressway. The article at the above link mentioned the name of the redevelopment, which was the 루원시티. As its site makes clear, in English it's 'Lu1 City,' and it's pretty massive (though behind schedule): 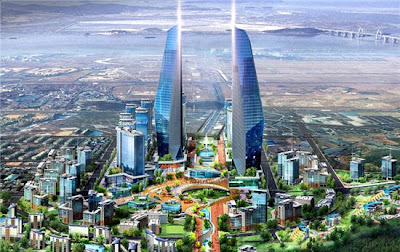 Much of northwestern Incheon will be developed in the near future - most of the land was reclaimed from the sea, as comparisons with old maps make clear. More photos of the redevelopment (as well as of the resulting demolitions) can be seen here.

The video of the demolition reminds me of listening to the recording my friend made years ago in Canada while across the street from a 8-or-so story building during its demolition, in which you could hear each floor slamming into the next. Needless to say, it was an impressive sound, though one which ended pretty quickly. As the video linked to above notes, it took six seconds for the 15 story apartment to collapse.
Posted by matt at 3:41 PM

You can't talk about building demolition on the internet! You're just begging for a bunch of 9/11 truthers to turn up and copypaste long screeds about the temperature of burning jet fuel..

Matt, do you know what the big (office) building they are currently making on Yeouido is? It's pretty massive.

Brent,
It's the Seoul International Finance Center. There are loads of renderings of it and photos of its construction here (including the gaping hole they dug in the ground and a crane accident which killed a worker). One thing they don't mention is how that gaping hole collapsed in once spot and opened a sinkhole that swallowed several cars.

Right next to the IFC is Parc 1, which is currently on hold.