Yesterday I posted about a protest held by Gwangju & Jeollanam-do People for Peace and Reunification in regards to a foreign teacher being investigated for assault who fled the country. I thought I'd look a little more into them.

In November 2003 the Hankyoreh reported that the inaugural meeting of the Gwangju & Jeollanamdo People for Peace and Reunification had taken place (at the meeting space of the Gwangju Women's Christian Youth Group) and that it was the fifth chapter after others started in Seoul, Incheon, Daejeon & Chungcheongnam-do, and Jeollabuk-do. Their aims are to cut back on national defense expenditures and stop the introduction of weapons in order to bring about disarmament and peace on the Korean peninsula. At the time the new Gwangju chapter had 30 members.

A profile of one of the leaders of the group, a minister who hopes for a peace treaty to bring about reunification and lead to the complete withdrawal of US forces, was published in early 2009.

In November 2009, they protested against re-sending troops to Afghanistan and urged talks between the US and North Korea.

In July 2010, they protested against joint Korea-US military exercises which "threaten the Korean peninsula with war" and make peace.

(The banner calls for an investigation into
the truth about the sinking of the Cheonan)
In October 2010, they protested against the ROK-US Security Consultative Meeting (and called for a peace treaty to be negotiated). 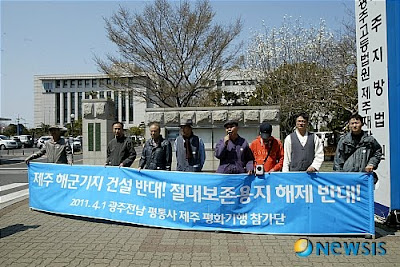 And then on April 25 they protested against the belated investigation by the Gwangju Prosecutor's Office which allowed an American instructor to flee the country, further victimizing the taxi driver he assaulted. 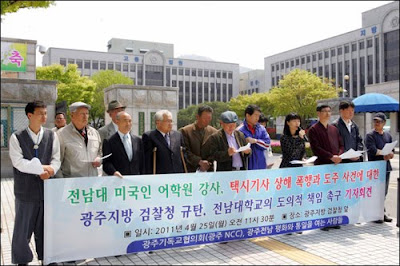 While there is a recent precedent for protesting in front of courts, it still has to be said that one of those protests doesn't really fit in with the others. Again, the constant references to the "American instructor" and hyperbole like "murderous assault," along with the SOFA-esque sovereignty issues may reveal their motivation, but then there could be other possibilities (perhaps the driver is affiliated with the Christian association the group has been holding protests with lately). Still, it's a pretty odd cause to take up for a group concerned with ending militarism and negotiating peace with the North. If it is due to the nationality of the teachers involved, then this would be the first time a group "critical of USFK's presence in Korea" has bridged the gap between that posture and criticism of foreign teachers in Korea (though members of Anti-English Spectrum have posted 'art' depicting the the murder of Yun Geum-i before).
Posted by matt at 9:29 AM