On January 21, 1972, the Korea Herald reported on an odd economic venture - one which PETA would likely not approve: 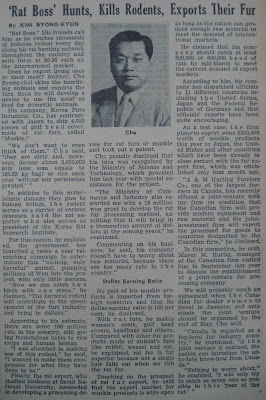 I couldn't help but remember this story; the Simpsons episode where Fat Tony runs a rat-milking operation to supply the school cafeteria also comes to mind. The comment "I wanted to make them compensate us for what they have done to us" is interesting in the light of the economic damage rats are portrayed as causing in the article.

One wonders what became of this venture. I somehow get the feeling that when Korea and Canada celebrate the ways in which the two countries have worked together in the past, this is something that is not brought up.

Still, the Korea of ten years later, in 1982, would not have been imaginable to those living ten years earlier in 1962, and as odd a tale as it is, it points to the measures people were willing to take to create wealth and pull the country out of poverty.
Posted by matt at 2:38 PM

Damn it, those bastards at A&M swore it was mink!