I was looking through the Korea Herald from January 1972 (the National Assembly Library has the original papers bound in large books) and came across the tale of that year's high school entrance exam, as told in photos. I'm not exactly sure when the high school entrance exam was abolished; the middle school exam ended in 1968, as this photo published on January 12 also hints at: 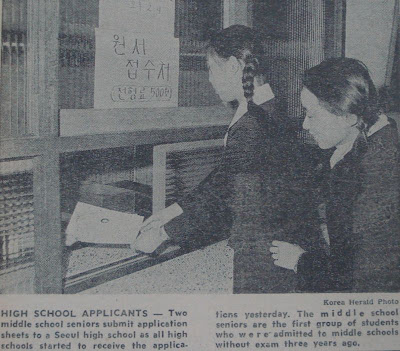 This post also looks at the middle school entrance exams. Interesting to note the braids and pony tail (pig tails?) on the girls above - not something you see many middle school students wearing today - perhaps it allowed them to wear their hair longer?

With the applications received, the test took place on January 18, and this photo published the following day shows how enthusiastically the tradition of affixing yeot was followed: 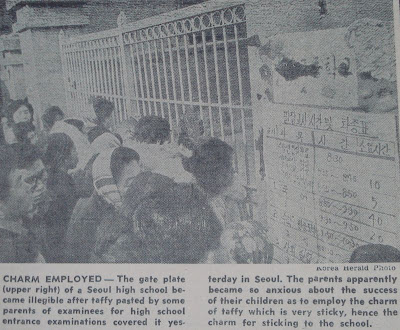 I imagine that wasn't much fun to remove. As it turns out, the testing wasn't finished, as this photo published January 20 reveals: 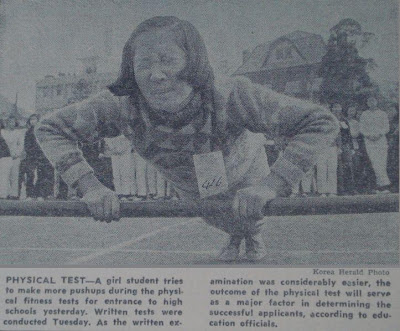 Interesting that it might not have mattered how well you studied, but that your ability to attend high school could have depended on whether or not you could force one more push-up out of yourself. The results were announced two days later, as this January 22 photo reveals: 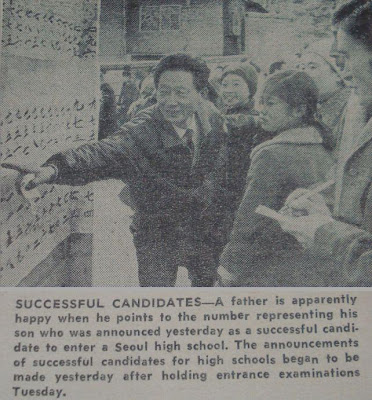 I'm not sure when general high school entrance exams were abolished (they still exist today for some schools, such as foreign language high schools). It was interesting to see that the university entrance exams were held after this. As this photo caption from January 14 notes, the exam was set for January 24, two months later than it is currently held: 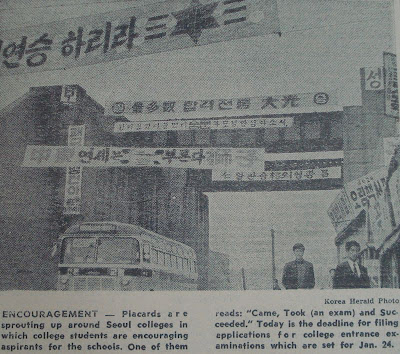 The Washington Post also covered Korean education the other day, looking at the attempts by the current government to reign in hagwons and private lessons. I found this description interesting:

[O]fficials [...] policing after-hours study haunts [...] field tips from a watchdog Web site that reports tutors who charge too much or work past a 10 p.m. curfew, and forward them to investigators who comb streets[.]

I guess relying on 'watchdog web sites' is the done thing around here for government ministries and police forces?
Posted by matt at 2:10 PM

The physical strength test was also done for university admission. I recall it was the early '90s when Ewha ended the requirement for pull ups.