The first night of freedom The scene above may seem unremarkable, but a 1982 Stars and Stripes article I came across reminds us that for more than half of South Korea's post-WWII history, a midnight to 4am curfew confined people to their homes.

It passed simply and as suddenly as President Chun Doo Hwan's New Year's resolutions which promise a year of sweeping changes in South Korea.

Chun not only abolished the curfew declared by the U.S. military government on Sept. 8, 1945, in Seoul and the port city of Inchon, he followed that New Year's edict with a proposed liberalization on Jan. 2 of the hair and dress codes that gave South Korean secondary schools a military flair.

Then came a major Cabinet reshuffle on Sunday to add what a presidential spokesman termed "new vigor and vitality" to the fifth five year economic and social development plan which gets under way in South Korea this year. Six high level officials were replaced.

The presidential pronouncements took most South Koreans and foreigners by surprise.[...]

Some gates at Yongsan Army Installation in Seoul remained open as USFK personnel ventured out on the first official night without curfew. Col. Robert C. Lewis, the Yongsan Garrison and Area III commander, said the installation will comply with the ROK government directives on the curfew.[...]

He said he will make decisions on such matters as shuttle bus schedule and club operation changes after the community expresses their preferences.

Basically, he said, it's a wait-and-see situation.

"We are evaluating now the potential impact on the club system and will follow the directives of the installation commander," Amidei said when asked about schedule changes.

Tom Casey, the owner of the Sportsman's Club in the popular Itaewon-Hannamdong club district near Yongsan, predicted a gradual adjustment to the curfew ease.

"I don't even know if anyone will even be here at 11:30," Casey said early in the evening. "Basically, I feel that most people have adapted to the curfew and that they will leave early."

Casey was right. Around 1 a.m. most of the district's clubs had closed. A few customers continued to dance at the Sportsman's Club. Other club owners said they expected more activity on the weekend, but none expected an immediate business boom.

Intracity bus and subway schedules were extended an extra 30 minutes for late homegoers and taxis continued throughout the night. Gas station hours were lengthened and flight schedules amended. Warnings went out to potential night prowlers, and the possibility of night tours in Seoul were contemplated.

As it turns out, however, the curfew was still in effect in coastal areas.

At Kunsan AB, the curfew lift was not so simple. Though a base spokesman announced that "effective midnight tonight the curfew in Kunsan City is lifted," the air base, some ll/2 miles away, is in the coastal restricted zone.

The spokesman added: "We're talking about Kunsan City as determined by the Korea National Government," which exempted the city as one of 14 specially exempted from the remaining curfew of coastal areas.

"Areas around the base," the spokesman said, "still require clarification."

According to some, the curfew lift entails the change to an easier lifestyle.

"I always got nervous around midnight," said Kim Shin Hea, a 28-year-old Seoul resident. "I'm glad it's over. It's fantastic."

Army Staff Sgt. Jim Coughlin, a 27-year-old infantryman from Everett, Wash., agreed. "I think it will cut down on tension," Coughlin said. "Police won't have to rush people off the streets now. It will just be a more relaxed atmosphere."

South Korea's 36-year-old curfew was quietly lifted at midnight Tuesday and, while some ventured out into the streets of Seoul (below) after midnight, a more typical scene was a lone pedestrian (above) strolling along an empty sidewalk. ' (AP) 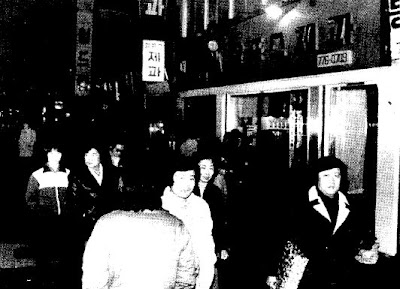 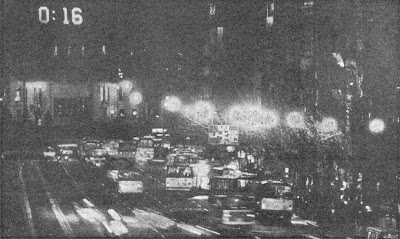 The photo above shows cars, buses and taxis out near city hall; below the gas stations are open late. 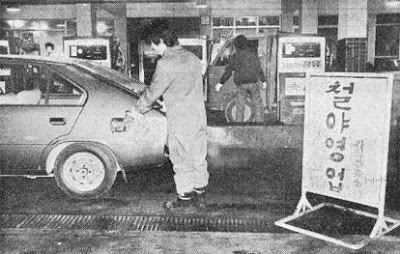 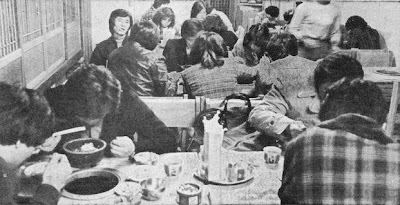 For the first time in a long time, people were able to enjoy haejangguk after midnight. I find it interesting that there seemed to be so many digital clocks in public, but then Seoul's city hall used to have a digital clock on it, as the last photo on this page about the 1988 Olympics reveals.
Posted by matt at 11:36 AM

cool post, thanks...talking about it with my hs students.

The Sportsman's Club was the place back in the day. I recently heard Mr. Casey in still in Korea and manages the water park at Cp Humphreys. He'd be an interesting guy to interview.

I actually found the article by searching for his name, after being told about him.

man, i haven't been back to GofP in a couple of months but nice stuff as usual! thx!

I lived and worked in Seoul 84-97. Seouldout has it right Tom is the source for all the unwritten history.