As noted in part 15, On September 27, 1984, MBC was to air an episode of Susa Banjang titled "Seoul Wind" about a young French vagabond who cons his way into teaching in Korea and ends up beaten in an alley. After protests by the French Cultural Center , however, the episode was postponed, to "be released after a preview." On October 11, 1984, the Joongang Ilbo published the following article:

The episode "Seoul Wind," which dealt with the vagabond foreigner problem and was abruptly canceled on the day of its broadcast on September 27 after pressure and complaints by the French Alliance, is coming out.

The French youth 'Pierre' enters the country on a tourist visa and uses fake documents to con his way into working as an instructor at a private school. One night he suffers an attack in an alley...

Unfortunately, it seems only a handful of Susa Banjang episodes have survived, and this (as well as the December 1983 episode where an American teacher was beaten to death in an alley) was not one of them.

In answer to a question below, here is the TV listing on page twelve of the Maeil Gyeongje the same day. At 10:15 is the listing for Susa Banjang: 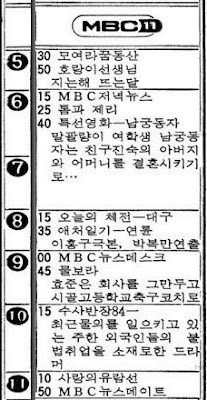 It reads, "The drama which recently brought on criticism for its subject material, about a foreigner living in Korea who finds work illegally."
Posted by matt at 2:05 PM

Did the show ever actually air in some form?

You prompted me to look through the other papers to see what their TV listings said. I added an update at the bottom of the post which indicates it was on MBC's schedule that night. I doubt it would have gotten pulled suddenly a second time.