Ups and downs, back and forth

On August 27, 1975, the Korea Times published a piece by John G. La Bella titled "Ups and Downs" in the Thoughts of the Times opinion column.

More interesting than the piece itself was the responses that followed. On September 4, the Times published this letter to the editor:

Dear Sir,
I am really disturbed by the recent series of articles written by Mr. John G. LaBella in which he is critical of Korean people. Mr. LaBella should remember that he is a guest in this country and must show more respect for his host. What right does a guest have to criticize his host in public?

On September 11, 1975, the Times published the following two letters - one which shared the sentiments of the above letter, and one which criticized such sentiments: 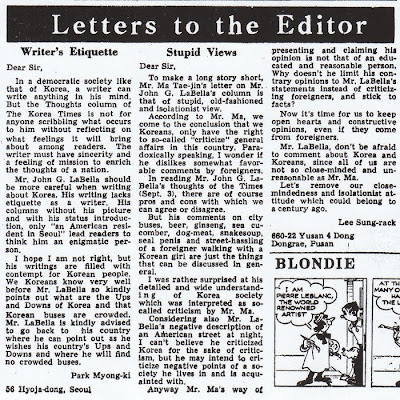 On September 20, an American resident responded to the first letter above: 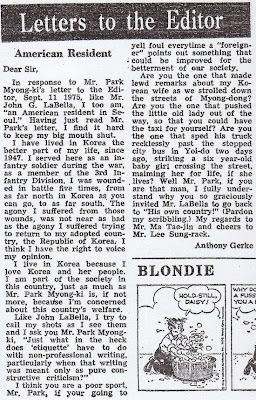 Needless to say, arguments about who is qualified to comment upon or criticize Korea have been going on for a long time. It's a bit like reading some blog's comment section, except that the conversation took three weeks to unfold. Tomorrow we'll look at another critical letter related to the above kerfuffle and the responses it garnered.
Posted by matt at 1:59 PM

I was particularly impressed by Mr. Park's letter, when he referred to Korea as a "democratic society" ... in 1975! Very interesting to see how people view themselves and their world.

Mark, that was also something that jumped out at me enough to comment on it. Some five years ago there was a discussion about the same thing, where I think it is worthwhile to point that South Korea was still relatively free before it was fully democratic and a lot of contemporary KoKos conflated the two. (It's also possible that the writer was a hack for the Park administration.)

I see the same thing today amongst the many Mainland Chinese students I study with: they, like a large portion of the PRC, believe they live in a democracy, based on a few factors that aren't entirely unlike South Korea may have been in 1975.

Anyway, I like the point Matt was making: the more things change, the more they stay the same (at least in terms of grousing about Korea and who is entitled to do it and how).