On June 16, 1984, the Korea Times published the following article: 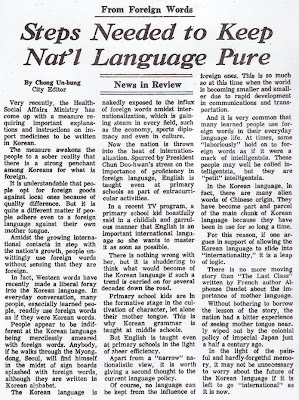 On the one hand, such sentiments are (were?) not only found in Korea. On the other, sentiments like these -

People appear to be indifferent at the Korea language being mercilessly smeared with foreign words. [...] The Korean language is nakedly exposed to the influx of foreign words amidst internationalization[.]

- sound quite familiar. Korea, "nakedly exposed," is weak and helpless at the hands of things (and people) foreign, which treat Korea "mercilessly." This kind of language crops up at different times and from the pens of various groups, from state actors like Park Chung-hee (who in the mid-1970s banned long hair, 'decadent' foreign pop songs, and marijuana in order to protect the youth from "degenerate foreign culture" which threatened 'healthy' traditional culture) to opposition movements (like the anti-American feminist groups who called for the government to force all visitors to the 1988 Olympics to show that they were AIDS-free).

Though the writer says that the issue should also be viewed outside a "'narrow' nationalist view," his cracks at the "'petit' intelligentsia" who hold onto foreign words, his assertion that the Korean language was "nearly wiped out" by the Japanese (two ten year periods of oppression bookending a 35 year period are enough to wipe out a language?), and his description of words of Chinese origin in the Korean language as "alien" (just like all those French words in the English language - damn the Normans!) make it pretty clear where he stands.

With the influx of so much English and the changes wrought by the internet, it's hard not to read the following sentence without wondering if he's kept his sanity in the 25 years since:

"It is shuddering to think what would become of the Korean language if such a trend is carried on for several decades down the road."

A little more than a decade later, an opposing view would cause great debate. I'll save that for tomorrow.
Posted by matt at 2:38 PM