On October 18, a user at DC Inside put up a post titled "Photos/video of married female elementary school teacher and foreign teacher adultery in school." He wrote that he hoped a capable person could figure out the location of the school, that he wanted to "expose bitches like these," and if not that then make it a news story. (Again, we see another example of trying to expose and humiliate transgressive women.) Below were photos of a middle-aged Korean woman posing in various stages of undress in what seems to be a Korean classroom (along with other photos unrelated to school). As you can see below, desks and chairs can be seen, as can books in Korean . 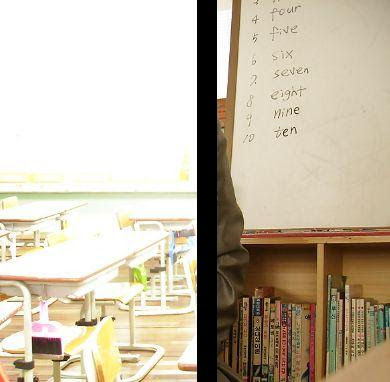 There is writing in Korean on a chalkboard, a sign saying (class) 4-3 (meaning it could only be in an elementary school). 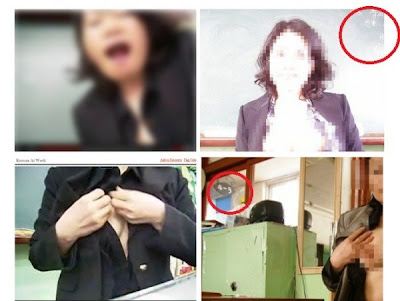 (Photo from here.)
It was then followed by three links: one to a 'post your homemade porn social networking site" and two to another site where two videos had been posted. One of the latter videos, 'Korean at work' is seen in the above photo (the two photos on the left) in which the woman undresses and masturbates in front of a camera in a classroom, while the other, 'bj in bed,' obviously does not take place at the school. The link to the 'networking site' is a profile for an (apparently) middle-aged white male Australian user named 'korean husband,' and features numerous videos which, judging by the screen shots and titles, involve him 'pounding' the same woman in a bedroom. She also turns up in as photo galleries of her titled "Korean wife" (several of which were posted at DC Inside), and references are made by commenters to his wife as well.

It's incredible that the poster at DC Inside was able to figure out that the woman was married, that what they were doing was adulterous, and that he was a foreign teacher in Korea, and yet he couldn't also magically deduce the location of the school. I guess there are limits to his ability to conjure up facts despite there being a total lack of evidence.

He got part of what he wanted, however. The press did report on this, and as a result, the post at DC Inside has been removed, as has korean_husband's profile page. Both have a half life in Google cache, but the latter has this where an online ad should be, showing that the government has certainly taken notice.

The day after the post appeared at DC Inside, the Donga Ilbo published this report:

A video and photos of a female elementary school teacher having sex with a foreign teacher in a classroom is circulating through the internet.

The incident in which a female middle school teacher had sex with a 15 year old male pupil is causing a great stir in society, and if it is confirmed that this video was shot in a classroom, it is expected to cause yet another great stir.

It has emerged that in the video a middle aged woman in a classroom faces the camera, bears her breasts, and engages in perverted sex acts or has sex with a foreign man.

The next paragraph describes all the evidence pointing to it having occurred in a classroom, like the classroom sign (4-3), writing on the blackboard in Korean, etc. It continues:

It has not been confirmed that the woman or the foreign man are actually teachers. Some netizens are reporting it as being a "hoax video."*

Reporter Nam Won-sang is doing a stand-up job here of passing off lies and half truths based on netizen writings as news, and especially of conflating the contents of two different videos. The foreign guy was never in the classroom in any video or photo mentioned, but readers are told of a "video and photos of a female elementary school teacher having sex with a foreign teacher in a classroom." As for "perverted sex acts," that's an interesting way of referring to masturbation (granted, doing so at work, especially in an elementary school, is most certainly going to get you fired). I wonder if the writer figures he can get away with such a description because most people won't actually see the video. And then there's calling the white foreigner in the videos a "foreign teacher" despite there being no evidence of this.

This is all topped off by the statement, "It has not been confirmed that the woman or the foreign man are actually teachers. " I think it's safe to assume the woman is a teacher. In the photos posted at DC Inside, she has different clothes in the different photos and videos taken in the classroom, suggesting they were taken on different days, and I think it would be difficult to be left alone in a homeroom classroom on multiple occasions and feel comfortable enough to strip and take photos of yourself if it wasn't your classroom. There's nothing which would suggest the foreign guy's job, however, and if it "hasn't been confirmed," why describe him as a teacher four times? The title of the DC Inside post declared her to be married and an adulterer, and him to be a foreign teacher, but while the Donga Ilbo did not repeat those descriptions of her, it had no problem with that description of him. Perhaps there's a simple equation being followed: Korean woman + white man + sex = foreign (English) teacher.

New Daily also reported on this with an article titled "[Is the woman] in the elementary school classroom a female teacher? Shocking video of sexual activity with foreign man." Despite the conflation of two different videos in the title (and in the first paragraph), it mostly refers to the "foreign man," except in this sentence:

While the Donga Ilbo seemed to be giving marching orders ("if it is confirmed that this video was shot in a classroom, it is expected to cause yet another great stir"), these are the only two news articles about the photos and videos, which were likely overshadowed by the middle school teacher-student sex case which came to light a day earlier. The photos are circulating around the internet in Korea, however, and the story may get a second wind if the woman and the school are identified.


* Feel free to suggest a better translation of '낚시성 음란물' [Update: Thanks, Milton].
Posted by matt at 9:01 AM

I read stories like this as an allegory about Korean history as viewed through the prism of late-20th Century Korean nationalist historiography: Koreans, because of their “pure blood,” are especially susceptible to foreign pillage. The women in these stories represent “the minjok” while the “foreign teachers” represent all the evil foreign invaders who pillaged the land throughout Koreas 3000 years of history. None of those claims are historically accurate, mind you, but the same myths first told by people like Shin Chae-ho and Yi Kwang-su are alive and well today. It’s no longer foreign armies that are “raping” Korea; rather it’s legions of 20-something, college educated, middle class, North Americans and Western Europeans.

But I think on a deeper level, this, along with all the other stories about Hurt Korean Pride, Korean women, and foreign teachers, goes back to what I touched on in your previous post: collective Korean male resentment directed at Korean women.

When is a foreigner in Korea most likely to experience “racism”? When he’s out in public with a Korean woman (this is anecdotal of course). And note that the person who usually gets the brunt of this attitude is the woman, not the man.

What is the usual justification given by those Koreans who engage in this type of behavior? They, of course, were just defending the honor of “their” woman from a litany of stereotypical behavior that foreign men are believed to commit. (Never mind that such attitudes completely dismiss Korean female agency—Korean females never “choose” to be with foreign men, rather they are “duped” by treacherous foreign men into committing unspeakable acts).

But the subtext here is not that Korean men are defending the “their” women’s honor, but rather Korean men are defending their own honor from the growing threat of the Korean feminism. The issue has nothing to do with impure blood lines, looking out for the “younger sisters” of society, or even the “lewd” behavior of foreigners. That’s all post-hoc justification. The real issue here has to do with the fact that the dominance of Korean males over Korean society is slowly being eroded, traditional family and social structures are being overturned, and men are being forced to compete equally with women in a variety of different venues. Throw in gender imbalances, especially in the countryside, and you end up with a whole lot of growing resentment and concern about the role women play in Korean society. This resentment is manifested through paternalistic attitudes towards women and attempts to shame these women back to the “kitchen.”

Thanks for the correction. I looked at a few online dictionaries and had no luck - didn't think of looking at Wikipedia.

I'll reply to your lengthy comment (and a few others) when I'm a little more awake...

Well stated Milton. I am of the exact same opinion; and, I similarlyt feel that the wonderful
Shin Chae Ho has had more of an impact on Korean society than he could ever have imagined.
In terms of K. male dominance going out the window--yup, happy to say it is! This clinging to the glorious past of "남존여비" is particularly interesting in ethnic Korean immigrants in Western countries. Take a gander at The Korean's posts regarding the girl getting beat up in the subway and you'll have a perfect example of this.
You know all this; and I know all this; but, I wonder if such viewpoints are held and/or nurtured in South Korea's institutions of higher learning. Do they talk about such silliness critically in the hallowed halls of Ehwas? (I know they ain't gonna discuss this stuff in the old boys club SNU).
At my university, I know of only one feminist professor speaking out against Korean patriarchy--that is one out of 250 professors . . . hmmmmm