Today is Hangeul Day, and it's being celebrated in various ways. Google has altered its insignia to incorporate Hangeul (a more pleasant unloading of han onto Google than complaints about the naming of the East Sea and Dokdo on Google Maps):

The National Korean Language Institute is in Banghwa-dong, and offers this banner: 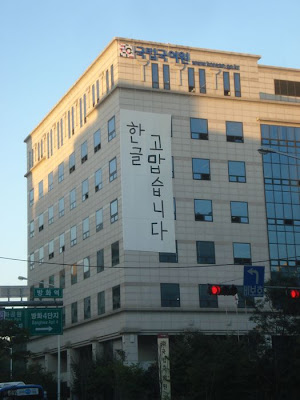 'Thank you Hangeul'
Even the US embassy is celebrating the day.

Naver tells us that this is the 564th Hangeul Day, though according to Wikipedia it started in 1945 (which makes little sense, as there was no Korean government until 1948). It also mentions that North Korea celebrates it in January.
Posted by matt at 3:23 PM

it is nice for hangul day.LOL

Guess it's only Hangeul Day in South Korea's Google office. Looks like the rest of the world is getting John Lennon popping up in their Google logo which takes them to a Yoko message about John when they click on the banner.