Gwanghwamun's unveiling: a time to reflect on the suffering caused by the Japanese 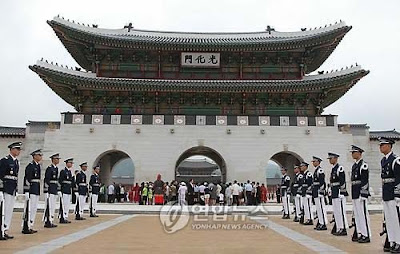 The Joongang Ilbo reports on the unveiling of Gwanghwamun, including this quote from President Lee:

"Gwangwhamun was blocked and neglected, and the flow of our national spirit was choked off," he said, adding, "We incessantly endeavored and struggled for the country's independence."

Obviously he (or his speechwriter) thinks that destroying the old Government General Building was a good idea, as it was the first step in unchoking the geomantic axis of energy flowing between Seoul's major mountains that determined where Gyeongbokgung was built when the city was founded. It seems a bit much to call the lines of energy on which the capital of the Joseon dynsasty was built the "national spirit," but then I'm no speechwriter. An article from a week or so ago looked at some of the controversies surrounding Gwanghwamun's restoration (such as whether the sign should be in Hangeul or Hanja) but had some errors, such as saying that "it had been destroyed by the Japanese" 300 years ago (actually, most of the palaces were destroyed by angry mobs of Koreans who burned slave registers, among other things, after the royal family fled north before the Japanese troops arrived). It also says that

During the Japanese colonial era (1910-1945), the Japanese moved Gwanghwamun to the east side of the palace to give the new General Government Building a clear view down Sejongno in 1927. In fact, the Japanese tried to destroy the gate outright, but Korean intellectuals successfully petitioned for its preservation.

I can't find it at the moment, but Andrei Lankov wrote an article years ago about how Gwanghwamun was preserved due to the actions of a Japanese academic. Today's article tries to push hard the idea that restoring Gwanghwamun is related to Korea suffering at the hands of the Japanese.

People from younger generations such as Moon Sang-seon, 38, were perhaps less emotionally affected, but feel Japan has to do more to make up for its past militarism. The recent apology by Japanese Prime Minister Naoto Kan didn't fully atone for its wrongdoings, he said.

It then manages to connect comfort women to Gwanghwamun as well. Nifty stunt, that. What I don't really get is why Japan is being talked about (yes, I know, it's independence day, when Koreans celebrate the anniversary of the day their country was magically liberated from Japanese rule - no mention of the terms "allied forces," "island hopping," "firebombing" or "Hiroshima" today, please). The last time the gate was destroyed was in 1951, during a war started by North Korea, not Japan. 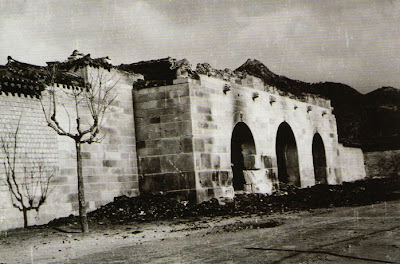 Yes, the Japanese did destroy most of Gyeongbokgung by 1915, when it held an exposition there, but that's not being talked about; instead, we see gymnastics being done to link Gwanghwamun's destruction to the suffering of the colonial period (or even the Imjin War) despite its destruction during the Korean War having had little to do with the Japanese.

We saw the same thing when Gwanghwamun Plaza was opened a year ago, as it was also tied to 'liberating' Sejongno from the scars of Japanese rule by removing 29 Gingko trees which were said to have been planted 100 years earlier by the Japanese (despite the fact that photos from the 1930s show no trees there at all). (There's criticism of Gwanghwamun Plaza here).

While this article mentions the politics (or lack thereof) involved in moving the unveiling date for Gwanghwamun up to Independence Day, perhaps having done it during the 60th anniversary of the Korean War would have made more sense. Of course, that would have meant putting blame on North Korea for starting the war which led to Gwanghwamun's destruction, but unfortunately narratives of victimization do not carry same symbolic weight when the aggressor isn't foreign.
Posted by matt at 9:04 AM

Your post is spot on! It's amazing that so many in Korea take pride in "Independence Day" when in fact, it should be more accurately be classified as "Liberation Day."

Thanks for the information about Yanagi Sōetsu - enjoyed your photos and post too. Since you mentioned that it was the Japanese who moved it, then yes, it would not have to have been moved back into its correct position had it never been moved. When I first heard it was going to be rebuilt in the correct position, I thought it to be a lot of work for just a few degrees - but I didn't realize the gate itself was made of concrete. Since that was the case, I think the reconstruction was a good thing, and while they're at it, why not correct the angle?

But considering how little regard was given to the royal family after liberation, the fact that the palace they lived in (and the pungsu associated with its location) is now (along with Gwangwhamun) linked to the 'national soul' seems... odd. Obviously the national soul didn't extend to this building. All said, the unveiling of Gwanghwamun should be a happy event to be celebrated, and not another chance to bring up the suffering of, among other things, the comfort women.

THis post is confusing. gwang hwa mun has suffered mostly through Japan's actions, although it was destroyed in Korean War too, a war setting vs a colonial imperial setting is different. Maybe you like to defend Japan's action, foreigner? Maybe you like to talk about hiroshima and not the 35-years rape of Korea, in the topic of gwang hwamun? Koreans must not forget Japan's coloanial empire is connected with this gate and the heritage.

Koreans must not forget Japan's coloanial empire is connected with this gate and the heritage.

With people of your mindset running the country and inculcating the young with the same attitude, I have no fear that Koreans will ever forget the negative aspects of the colonial period.

So you now see why gwang hwa mun is connected to Japanese colonialism? Ok, I was hoping you understand a little bit about Korea! Thanks.

Hello, I'm an admirer of you for a long time. Always enjoy reading every materials written by you, especially those regarding history and Foreign teachers bit.

I study History at Yonsei Univ. (currently doing Public service, or 공익근무). I recently wrote an entry on my Korean blog -
(http://veritasest.egloos.com/1767755)

Hope we can keep in touch via email or other 'Modern' methods...:-) I have myself collected lots of stuffs related to Korean history, (photos, books, old 78s, etc.) and hope I can share some of them with you.

Thanks for the comment, and for linking to your post - you have so much information there about the original decision to reconstruct Gwanghwamun. I found it fascinating that the first "Visit Korea" year was so long ago. I've been using Naver's digital news archive search to research different topics from the time period it covers (1960-95) and interesting things always turn up.
Feel free to email me at mattvanv at yahoo dot com...