You know you've had too much to drink...

...when you drive the wrong way on the 401, North America's busiest highway, for 25 kilometers.

A 39-year-old Aurora man is facing charges after he was spotted driving the wrong way down Hwy. 401 early Friday.

Soon after, an officer heading west in the westbound lanes tried to stop the vehicle as it neared Dixie Rd., but had to perform a last-minute evasive manoeuvre to avoid colliding head-on with the SUV as it passed, said OPP Const. Graham Williamson.

About five kilometres down the highway, near Hwy. 427, officers on the eastbound 401 were able to grab the driver’s attention across the median with their cruiser’s blaring sirens and flashing lights.

The driver pulled over – almost 25 kilometres from where he was first spotted – and was promptly arrested, Williamson said.

While wrong-way drivers are “a very common call” for police, “most people realize what they’ve done and quickly correct themselves. Occasionally there’s one who gets stopped and fortunately in this instance there were no injuries or collisions,” Williamson said.

Il Kyoung Kim is charged with dangerous driving, refusing to comply with a breathalyzer demand and impaired driving.

He is due to appear Sept. 27 in a Brampton court. 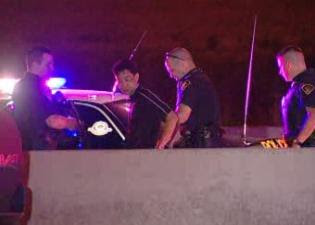 Photo from here (where there is video as well)
The article above almost seems to play it down, unlike this article:

"It was incredibly dangerous," OPP Const. Graham Williamson said. "The potential for disaster was there at every moment."

I'll say. There is always pretty heavy traffic on that highway, even in the middle of the night.
Posted by matt at 10:51 AM

American judges should have free rein to throw the book at Korean-born DUI defendants to send a message. Starting with this guy.

Is the guy in the OP a KoKo on a visa, a KoKo who naturalized, or a KoCa?

I'm not sure what his status is. I looked through a half dozen articles and saw no mention of it. I doubt he's on a visa, since it seemed to name him as a resident of Aurora, Ontario.

And Kushibo, I'm glad that justice was finally served in that case - it was a long time coming.

Yeah, I was thinking of that later and realized it wasn't very bright of me to say.

Not necessarily "not bright". Your brain just took a brief nap. It did eventually wake up. :)