The Seoul of the future, as seen in the 50s 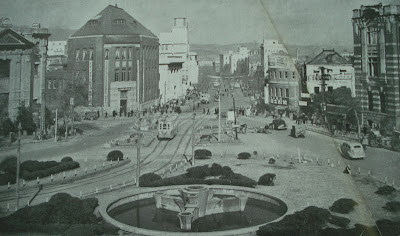 A few months ago I stumbled on a book at Yonsei University Library which presented readers with images and maps of Seoul, places to visit, and future plans - all from the 1950s. Or so I think; I forgot to write down the book's name, and no date was visible. There are a few clues, however. If you look at the photo above, of Namdaemunno, you can see the Bank of Korea on the left, and the old post office - built in 1916 - on the right (here's a photo from a similar view taken during the colonial era). Now, this may be an older photo, taken years before the publication of the book. The reason I say that is because the post office was heavily damaged during the Korean War (it was shelled and burnt out, though its walls still stood intact), and I'm not sure when it was finally demolished (a shame, as it was a beautiful building, but understandable, as reconstruction, not preservation, was the goal of everyone at the time). One little thing I noticed in the photo above are the jeeps.

Here's a map of Seoul at the time: 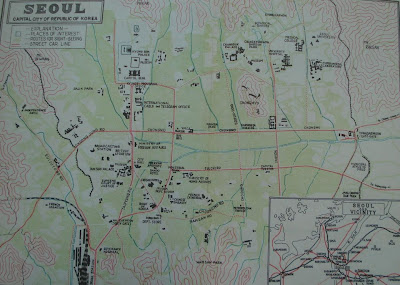 Here's the introduction to a very interesting map:

Seoul's population would reach almost 2.5 million in 1960, so a population of 1.5 million would suggest the book is from perhaps the mid 1950s. Also, the expansion described above took place in 1963, enlarging Seoul to pretty much its current boundaries. You have to enjoy the projection that the enlarged city would "be able to embrace about three million population in the future." The map itself is rather interesting: 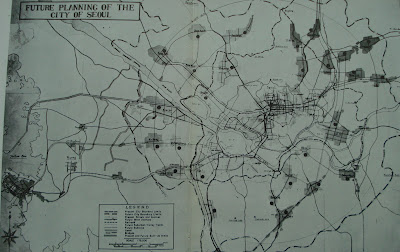 The projected boundary for Seoul seen above is not exactly how it turned out. In the northwest, it encompasses much of what is now Goyang-si (you can see that Neunggok is included in Seoul), and further south, Gogang-dong in what is now Bucheon is also included within Seoul. What I found really fascinating is the fact that there is a canal from the Yellow Sea to the Han River on the map, in almost the same location as the Gyeong-in Canal being built at the moment. The one difference is that on the map above it runs south of Gaehwasan and cuts Banghwa-dong in half. Also worth noting is that the area where the canal turns south after reaching the coast is no longer ocean - that entire area has since been reclaimed.

I'll post a few more photos from the book (and a few others I dug up) over the next few days.
Posted by matt at 12:57 PM

Oh, I believe the book you got at Yonsei Library is called "This is Seoul", the photos and comments compiled by the late Kim Yeong-Sang in 1957. I have borrowed this book several times so far, and always got fascinated with the contents of it.

Thanks for letting me know - I'm pretty sure that was the title. I've also come across fascinating information and diagrams in Seoul, 20th Century,: Growth and Change of the Last 100 Years, published by the Seoul Development Institute, such as plans for a greater Seoul and Incheon area (but one which looks different than the metropolitan area we have now...