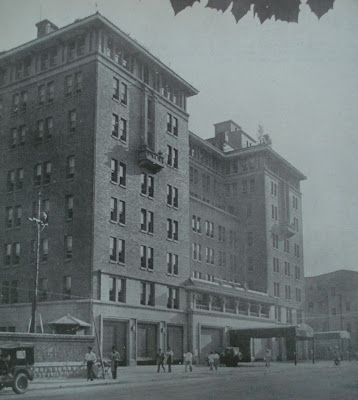 From the book I mentioned here comes photos of the interior of the Bando Hotel (seen above). The hotel was built in the late 30s or early 40s (anyone know when exactly?) as the Hanto Hotel, and was the tallest building in the city for years. It was used as the US Embassy from 1948 to 1962, and was demolished to make way for the Lotte Hotel in the late 1970s. Here's what it looked like on the inside: 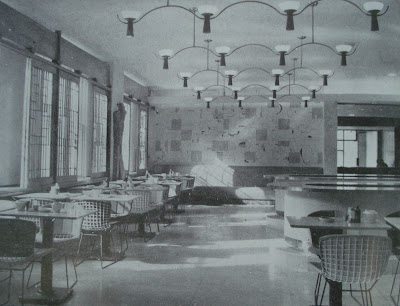 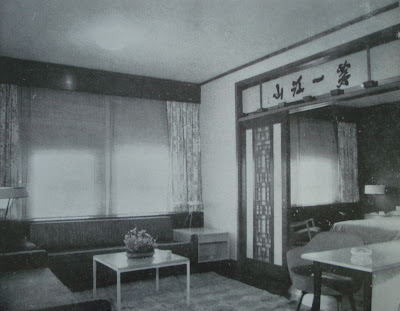 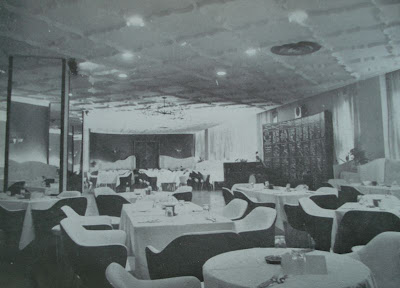 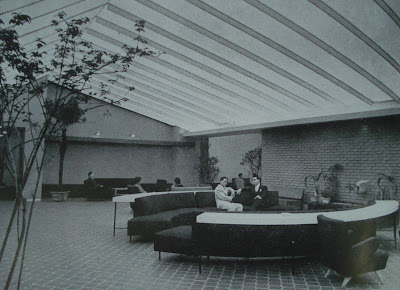 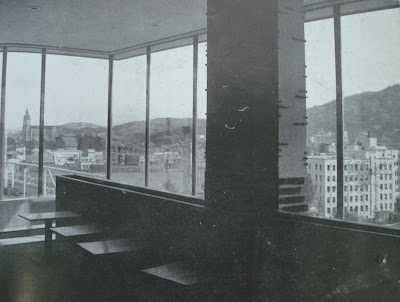 "Sky view of the Bando Hotel"
I think it appears briefly in this video (posted here two months ago, when I missed it). It can also be seen in this post, along with several photos taken from its roof in 1945.
Posted by matt at 9:05 AM

OMG, where did all those gorgeous MCM pieces go?!? If someplace opened today looking like that, they would instantly become the coolest hotel in the country.

The Bando Hotel was built in 1938. There are several other photos of the interior which can be found on this link ;

The American Embassy after the Korean war in the 1950s was across the street in the old Mitsui Building. I remember the Bando as a hotel in the 1950s--owned I think it was, by Mme. Francesca Rhee though maybe that was disinformation. I liked to stop by on the way home from school and get an eclair at the bakery.
The Mitsui Building became the USIS Building in the early 1960s when the the Embassy chancery relocated to its present site on Sejongno.

Both the old Chosun Hotel and the Bando were used as US government facilities after WWII. The Chosun remained a US billet until the early 1960s anyway. The Bando was a hotel by the time I got to Seoul in 1954, though I think it was either the Embassy or the office building for the Economic Cooperation Administration (ECA) before 1950.
After the Korean War certainly the Embassy chancery was across the street in the old Mitsui Building, which still stands. There was an annex on the corner across from the present President Hotel, which served as the USIS library and cultural center. When the Embassy chancery was moved to its present site on Sejongno in the early 1960s, the old Mitsui Building became the USIS, famously occupied by student demonstrators in May 1985.
I think the Bando (Hanto) was built originally by the Japanese chemical tycoon Noguchi Jun, as idea0853 says, in 1938.
I remember afternoons coming home from high school stopping by the Bando Bakery in the Hotel to enjoy their eclairs.

My father returned to Korea in November 1945 as a civilian field officer in the U.S. Army, and upon arrival check in at to U.S. Military Government in Korea headquarters at the Bando Hotel, from where he requisitioned a jeep and received orders. He stayed there while on the job as translator to General Hodge, but would go home to his relocated family on weekends. Thanks for your fabulous blog.