A less-than-relaxing trip on the South Manchurian Railway 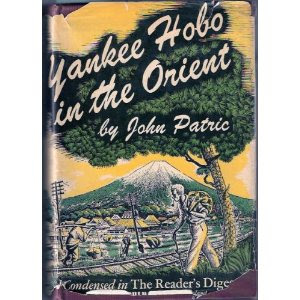 Here's an excerpt from Yankee Hobo in the Orient, which was originally published as Why Japan Was Strong in 1943, and republished in an extended version in 1945 by the author, Jon Patric. Patric had lived as a hobo at different points in his life, and for months prior to traveling to Asia in the mid 1930s, did so again in order to both save money for the trip and prepare himself to travel cheaply on a basic diet. Here he describes one of his experiences in Korea:

After I had crossed the Sea of Japan from Shimonoseki to Fusan, gateway seaport of Korea, I had taken a train for Seoul, the capital. The name-changing Japanese called it Keijo. At every opportunity I alighted from the train and strolled curiously around the station platform. I never tired of that, for something interesting was always happening.

At one little back country station far in the interior of the Korean peninsula, two Government railway guards had caught a small, barefoot, soot-grimed Korean boy who was stealing a ride. They had jerked him from beneath one of the coaches, and as they led him away – he was only about eleven, and they could handle him easily enough – they were beating him pitilessly. They came toward where I was standing, continuing their beating as they came.

Now, as I have said, I used to steal rides on trains when I was a boy. In fact, I grew up to be a hobo. After I was full grown, I was kicked off trains by trainmen. They didn’t do it literally, unless I’d been warned to stay off and had climbed back on, or unless I’d stopped a train with stolen torpedoes as I did a few times when I found myself stranded in the rain, far from a town. I’ve been led out of boxcars, searched, and made to buy a ticket to as far away as what money they’d found would take me. I’ve been locked in the clink.

But nobody ever beat me like those government railway guards were beating the Korean. And when I’d been a kid, and had run away and hoboed my way from Seattle to Mexico and back, nearly all railwaymen I met were kind to me. They shared their lunches with me, they helped me locate other trains, they sometimes even let me ride in the cab. But they worked for the Great Northern Railroad, and for the South Pacific Company. They did not work for the government as did the employees of the South Manchurian Railway.

Since, even in Korea, I considered it the inalienable right of hoboes and boys without money to steal rides on trains, I was mad.

Before the guards realized what was happening, I had instinctively, without thinking it out at all, yanked the prisoner away from them, stood between them and him, given the boy a push, pointed to the near-by woods, and said:
“Scram!”
“Scram,” now, isn’t a Korean word.
But I think it has a remarkably provocative sound in any language, and I predict that someday it will be universally used. On nimble bare feet, before the bewildered guards – who never had that happen to them before – could stop him, the boy had scrammed.

He had scrammed into the scrub woods beside the railroad right of way. The guards glowered at me.

Before long the train got under way again, with all its personnel, official train guards, and every passenger except the Korean hobo boy. But as the cars began to move, faster and faster, I saw the lad dart out of the woods and throw himself beneath the train. Surely, he’d be killed!

At the next station I got off again. With an air of carelessness I bent down beside the railway coach to tie a shoelace I had deliberately untied beforehand, and stole a surreptitious glance toward one of the heavy, multi-wheeled trucks upon rested the rear end of the car. There, on top of it, was the boy again, crouched catlike, clinging with fingers and toes. I hoped the guards had not seen him attempt to resume the journey that seemed important to him.

Not two guards, now, but four of them, approached. Two carried side arms. These kept their hands provocatively and meaningfully on the butts of their revolvers to discourage any meddling foreigner with what it was their duty to do.

Up ahead, the engineer got down from his cab and lit a cigarette, as if he knew the train could not start again as quickly as usual.

The original guards – the ones from whom I had snatched the lad in the first place - now carried long and heavy sticks. These sticks were apparently kept on the train for some special purpose. They were about six feet long, maybe an inch and a half in diameter, and one end of them had been whittled, like pencils, to sharp points.

One of them men crawled to the other side of the coach with his stick, and an armed guard went with him. Then, from both sides, with their pointed sticks, two men prodded the boy to dislodge him. It wasn’t gentle prodding, and they didn’t try to persuade him – they poked at him savagely and roughly. He was a brave lad, and stubborn, and he held out at first. For a surprisingly long time he resisted the vicious lunging jabs of the two Jap officials. Once he grabbed for a stick and almost got it. I wished he had – he needed the weapon. Passengers – some – laughed as they watched; they were neutrals enjoying the show. The sticks punctured the flesh of the boys body, and their points tore and smashed at the little hands and feet that clung so tenaciously to the oily and dirty iron under the railroad coach.

But human flesh, even that of a determined little Korean hobo boy, could not stand such treatment long. Finally the lad loosened his grip, and fell to the gravel roadbed under the car – almost as if he had fainted for an instant. When the guards pulled him out, he bled in a dozen places, and his red blood stood out against the black and the grime of him. His hands and feet, by which he’d clung, seemed badly injured, and he had a strange look of one who had, at last, been cut down from crucifixion.

But they made him walk on his bleeding feet, and as he walked they beat him. After all, he was only a little Korean hobo boy, and they were officials of the “enlightened,” bureaucratic Japanese Government that controlled this South Manchurian Railway.

You might get that Patric wasn't a big fan of government, and the extended version of the book which he self-published has numerous digressions which make clear his libertarian beliefs. More information on Patric can be found here. One other tidbit: I first heard of this book in the book I Married a Korean, as Agnes Kim met Patric during her voyage over to Korea (and he got her in quite a bit of trouble after filling out an extra customs form with her name, ridiculous answers, and a reason for visiting Japan that led to her being questioned by several angry immigration officers: "To Assassinate the Mikado"). Their time on the boat together can be read here.
Posted by matt at 9:15 AM

Geez! That's a harrowing account, not dissimilar from the book I'm reading now -- Chang-Rae Lee's "The Surrendered," which is his epic Korean War-era novel. I recommend it! (But it's very bleak.)