According to a Joongang Ilbo article titled "Work visas getting easier for teachers,"

The government will ease regulations to exempt foreign language instructors from having to submit documents and update their visas every time they change employers, the Prime Minister’s Office said yesterday. Foreigners with E-2 teaching visas will also be allowed to stay longer than allowed at present, the office said.

I'm not sure if the Prime Minister's Office and the Justice Ministry are all that great at communicating. It's not all sunshine, lollipops and rainbows though:

However, the government decided to retain the current system obligating foreign language instructors to get an HIV test, citing a public survey in which the test was supported by 80.7 percent of ordinary citizens.

Well, the propaganda campaign is working, then. 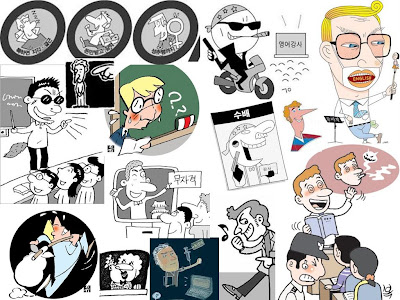 I'm sure Anti-English Spectrum, who are responsible for the negative articles in the media equating foreign English teachers with AIDS, and the Chosun Ilbo family (Sports Chosun, Chosun Ilbo, Chosun.com [1, 2, 3, 4, 5], and Weekly Chosun), as well as other journalists happy to support them, must be thrilled. The article continues:

The measures were decided to help eliminate inconveniences experienced by foreigners while living in South Korea, the office said.

Under the measures expected to go into effect next year, foreigners can join domestic Internet sites by using their foreigner registration number or passport number, it said. [...] Other changes include making more space on government documents for foreigners with long names.

Well, that's nice. Or it will be. Once it happens. This sounds interesting:

[ATEK] will serve as official advisors to the Seoul Metropolitan Police Agency by providing policy and procedure recommendations as part of the newly established “Foreign Affairs Advisory Committee.”

Perhaps they'll help teach the police force more phrases for dealing with English speakers in Korea. And not for things like we see in the article, such as "I am here to protect you," but important stuff, like, "please give me a urine sample."
Posted by matt at 9:06 AM

Under the measures expected to go into effect next year, foreigners can join domestic Internet sites by using their foreigner registration number or passport number,

They've announced this "measure" now at least 4 times in the past 5 years, to my recollection. It still has not come to pass. I'll believe it when I see it.

Every year these kinds of xenophobic articles are run in the papers. Notice that they started up again right at the end of the world cup? Korea is nothing if not predictable. So to usher in the season of hating foreigners in the South Korean media, here is a little ditty I have been working on to celebrate the season. It’s a work in progress, but I think it is kind of catchy so far.

KNOCK DOWN THE FOREIGN DEVILS

Are they finally going to stop asking us to re-submit and re-submit our transcripts and degrees? Is it possible someone has FINALLY bought a clue?

What does this mean exactly? That E-2 visas will be valid now for more than one year (maybe similar to the E-2, which can be as long as two years). Or does it mean that time in-country (with Immigration's permission, after you leave your job) has been lengthened from the current 15 days?

In addition, the government will lower requirements for Korean language ability and minimum income when granting permanent residency. Foreigners who have been staying more than 10 years will be allowed to substitute the Korean-language test with an interview

This is only good news if Immigration will ALLOW one to apply for the F-5. I have far more than the current F-5 requirements ask, but every single Immigration officer refuses to accept my application because I am not married to a Korean.

They tell me to get my F-5 by first getting my F-2, then getting my F-5 later... even though current F-5 regs allow single people to get one WITHOUT marriage as long as one meets the criteria. I've been here for 14 years, among other things. I think I meet the criteria.

Changing the criteria won't "make it easier" as long as Immigration continues to refuse applications.

I read in the Herald that the staying longer bit means E2 visa holders can now stay up to a month after their employment contract expires instead of having to apply to extend it or leave after 15 days.