Invasion of the body snatchers

Robert Neff has posted more photos of his trip to the site at the Marmot's Hole.

In the Korea Times yesterday was an article by Robert Neff about one of the stranger tales of foreigners visiting Korea - the tale of Ernest Oppert:

Oppert was not the only foreigner in Shanghai interested in opening Korea. In the early spring of 1868, Oppert met Father Stanislas Feron. Feron was one of three French priests who managed to get out of Korea alive during the religious persecution in 1866 — the same persecution that resulted in a short war between France and Korea.

Feron told Oppert that he had a plan to open Korea to the West. According to Feron, the average Korean desired relations with the West, but it was Daewongun, the regent, who was violently anti-foreigners. If Daewongun could be removed or coerced, Korea could then be opened up.[...]

Feron stressed the reverence Koreans held for their ancestors before he proposed something that was completely unacceptable to Westerners and Koreans alike — to dig up the bones of Daewongun’s father and hold them hostage.[...]

Once Daewongun agreed to open Korea the bones would be immediately returned. He also indicated that it was the Korean Christians who had devised the plan.

Things didn't quite go according to plan (they never do). For more information about this trip, a good place to look is Oppert's own book A Forbidden Land: Voyages to the Corea, which was translated into English in 1880 and is available here.

I have to say, though, that I'm not sure if the article was as well placed as it could have been on the Korea Times' webpage today: 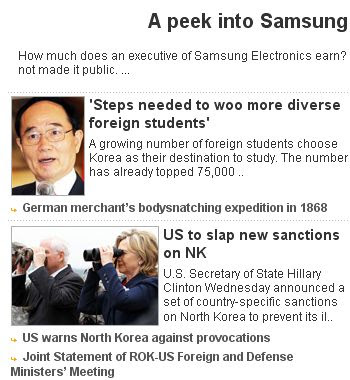 Perhaps they have a different idea of "diverse foreign students" than I do...
Posted by matt at 1:38 PM

Thank you for the archive.org link!
His name is Ernst, not Ernest.
I know of only few German-speaking people to have appeared at the edges of Korean history like von Möllendorff (who was probably the most influential of all), F. Eckert, A. Eckardt, F. Donner and J. Hinzpeter, and while there may be an interesting story behind each of these names (do you know any others?), Oppert's case is my favourite and certainly has the best potential to become a B movie, German necro-villain included. And if I had my way, 18 April would be “Korea♥Germany BFF forever xoxox Day” in honour of his contribution to good feelings between our two countries as early as 1868.

"Ernest" came from Neff's article, and I did wonder about whether it might be Ernst, but forgot to pursue it further as I reflected on the fact Ernest was my great grandfather's name.

As for that list of Germans, I'm only aware of von Möllendorff and Hinzpeter, though I know there was another German reporter with Hinzpeter in Kwangju, and I believe there were at least a few books written in German about Korea during the late 1800s (look at archive.org). Also, I'd love to get my hands on this documentary...

I wasn’t aware there was a film, I’ve only seen the book of the same name by the same man (1st ed. 1915, 2nd ed. 1923). If you’re really interested I could perhaps scan some of it for you, copyrights shouldn’t be a problem after more than 70 years, right? It includes 24 lumières, 290 small and 28 full-page pictures and three maps.

I also wasn’t aware of the Süddeutsche Zeitung correspondent with Hinzpeter you mention. His name is Gebhard Hielscher, and he went on to head the Tokyo branch of this organisation.

F. Eckert lived in Korea from 1901 to his death in 1916, composed Korea’s first national anthem and established the imperial court orchestra.

André Eckardt went to Korea as a missionary when it was on its way to annexation. While I’m not aware of any direct influence on Korea, he introduced its culture to a German readership and was a pioneer in German Korean Studies.

F. Donner was Syngman Rhee’s wife from 1934 to his death and kept a low profile.

Liancourt - thanks for catching that mistake with the name - I am not sure if I made the mistake because I was tired or if that mistake is in my original notes. Actually there were a great number of Germans in Korean history. Mollendorff hired a great many of them (Korean Customs Department) and most of Korea's steamships were crewed or captained by Germans. Hans Alexander-kneider recently published a book and he also has a website with information on many of these early Germans....oops, almost forgot to add....don't forget the German gold mining concessions.
Robert Neff

P.S. Thanks for blogging about the article Matt....let's get a beer

Is it? That's interesting, although I should’ve known about it – kneider.info looks vaguely familiar, so I must have seen it a long time ago. Thanks for bringing me back to that site, and for your article!