Photo from here.
The Donga Ilbo reports on an interesting find:

The armor of a heavily armed warrior from the Shilla Dynasty (57 B.C.–935 A.D.) and his horse buried 1,600 years ago have been discovered almost intact.

The Gyeongju National Research Institute of Cultural Heritage yesterday said the discovery was made in an ancient tomb with two coffins buried in the early fifth century at the Jjoksaem district of the Hwangohdong ancient tomb cluster (Historical Relic No. 41), which had around 150 Shilla tombs from the fourth to sixth centuries in Gyeongju, North Gyeongsang Province.

“Metal scale armor of the buried assumed to be that of a warrior who led soldiers riding heavily armored horses together with horse armor and horse riding tools were excavated in a state of near perfection,” the institute said.

This is the first time an entire set of ancient armor for both man and horse have been discovered intact. They indicate how warriors were armed on horseback while heavily clad in metal armor.

Read the rest of the article for more details. The Korean language Donga Ilbo article also has a diagram of the tomb and a slideshow. 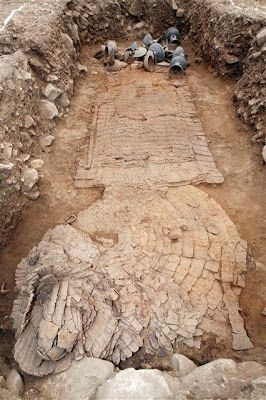 Warrior may be too strong a term. Guy trying to fight on a horse may be more appropriate. Warrior kind of denotes that he can fight. As Koreans have never won a war, this is comical.

Wow, you have such a deep understanding of history. I'm so glad you graced my comment section with this thoughtful comment.

Thanks for the admiration, Matt. Yes, I sure do have a deep understanding of history, insignificant countries' history and that of important countries. You know, I have been here in Korea probably three times longer than you and paid taxes on 68 million Korea won in 2008, so I am guessing that that is three times your salary as well. I really enjoy your blog. I sincerely do. But on this post, I was spot on. The Koreans have never won a war. Talk to a Korean and they will tell you some crap abot how Lee, Soon-shin won 132 naval battles and never lost one. I call bullshit on that. In addition, there is not so much as a toothpick of evidence that shows the turtle boat ever existed. It is a nice fanatsy story to ease the pain of getting your ass kicked everytime the Koreans enter the schoolyard. But you will delete this comment, won't you smart guy? 됐어.

There’s a not-so-fine line between being critical and being negative. You crossed that. I’m guilty of that too, sometimes, such as in my sarcastic response to your comment.

I don’t see how anyone with a deep knowledge of history could fail to remember Eulji Mundeok or the way in which unified Silla (the source of that horse and rider) worked with Tang China to defeat Baekje and Goguryeo and then defeated the Chinese (!), thereby unifying the peninsula. That’s a pretty important victory, don’t you think? And if that’s too far back for you, then you probably should say that ‘Joseon’ never won a war, and not ‘Koreans.’

You’re right that the turtle ships probably didn’t exist. I believe Korean historians have discovered this over the past few decades, but it hasn’t filtered down to the public. I imagine some would worry about bursting the bubble of nationalist myths (something that you’re criticizing here, I realize). Still, Yi’s ability to prevent the Japanese from supplying their troops via the Yellow Sea and essentially cutting their supply lines pretty much guaranteed the Japanese were not going to go much further than they did. As for his victories being exaggerated, well, it’s worth remembering that the Japanese revered Yi for his victories over them. The admiral who defeated Russia at Tsushima in 1905 said that he could perhaps be compared to Nelson, but not to Yi.

...worked with Tang China.They didn't do it alone. What was the ratio of Chinese to Koreans?