Back when I first moved to Banghwa-dong, I was told that the new subway would be finished in 2007 (one of my adult students was working on the construction at the time). Then it was 2008. Then late 2008. Then early 2009. Then end of May, 2009. I then news reports on naver stating that it would begin June 12. And then I saw the banner above near my house, for a celebration of the opening on June 13, which seemed to confirm that, yes, it was going to open this Friday!

A student told me last night it had been pushed back to late July due to technical issues, and I read about it on naver. The Joongang Ilbo has more in English here. I had hoped it would begin before I moved out of my current place (5 minutes from a station), but that's not going to happen.

My coworker told me the other day that he had gone down into Shin-Banghwa Station the other day, so I decided a few hours ago to go have a look at it. 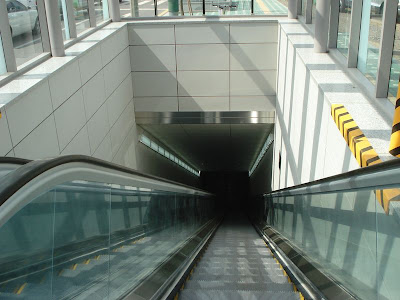 It's certainly spacious inside. Interesting to finally see it, seeing as I've been passing by the site on my way to take picture like these for years. I like the neighbourhood maps: 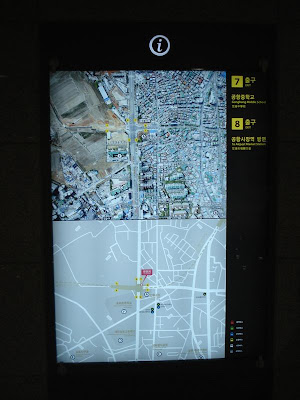 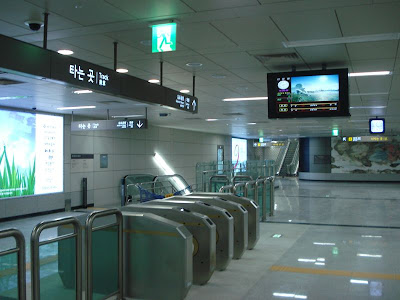 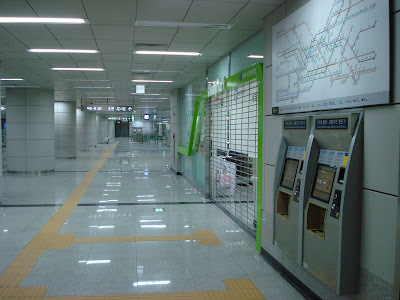 Interesting that the stores are fully stocked with food. I hope the expiry date is many months off.

I have photos of other stations, and of their construction, but I'll save that for another time.

Also, a student mentioned that there was an meeting giving information about a planned Ilsan-Gwangmyeong expressway to be built near Banghwa-dong (likely Magok-dong). Munsan was also mentioned, so it may connect to this planned expressway from Seoul (close to Goyang) to Munsan. Needless to say, residents don't really want an expressway in their backyard.
Posted by matt at 5:57 PM

I saw one of the stops near the National Assembly and at the top of the stairs is an LCD display that tells you where the train is in the tube. It showed that trains were moving through the tubes (at a greater than usual clip), but they might have just been testing the LCD display rather than driving subway cars around the line.

I hadn't noticed that at my stop - neat. Apparently they've been testing the trains for a month or two. The other day I was at Gimpo Airport to take the Incheon Airport train and realized that on the other side of the glass divide from the airport line platforms is the line 9 platform, complete with a train pulling in.

At least they're getting them built, though the longer and longer delays for these projects are a tad annoying (and concerning, if they are a trend).

Public railway projects in/near places I've lived: In Honolulu there were delays of three years to start the railway because of opposition to its ugliness; in Los Angeles their subway took eight years just to decide where to put it; and in Orange County they're digging up railway lines that could be used for light rail, and making them greenways (not parks, just grassy areas).

I won't even begin to mention how long things take in Bangkok :0

It's been 15 years since I've read up on the idea, but did Toronto ever get that third subway line? I know they were arguing about it for ages.

How far in could you get? Would it be possible to get all the way down to the tunnel?

kushibo:
Yes, despite my complaints, they do get things done very quickly here.

ROK Hound:
Apparently the Sheppard Line opened in Toronto in 2002.

Jon:
A friend walked down onto the platform (the wheelchair access gate is open), and could possibly have gotten on a train, as one stopped, and the screen doors opened. Access to the tunnel is unlikely as the screen doors are all in place.

Unless the air vent about 400 meters away out in this field is still unlocked, it would pretty hard to get into the tunnel (keeping in mind that the trains are running now). If the grate on that vent is unlocked, you could perhaps go down there. It's crossed my mind, but it's not a place I'd want to go by myself.

Trains are running, I'm not going to get too close.

Toronto unveiled this grand "transit city" plan, putting in above ground light rail (ie street cars like they have in Portland, OR). It all looked good but the find print was this was Toronto's vision for the year 2035. Well, okay then.

In Toronto we're basically lucky to get a new subway station every decade. Korea is much admired for its ability to build 2-3 whole new subway *lines* in a decade.

The problem with Toronto is it requires funding from both the province and federal government. Toronto is the most hated city in Canada. No politicians in Canada will win votes saying he supports billions in transit funding for Toronto. The conservatives know they'll never get Toronto people to vote for them if they funded transit. And the liberals know Toronto will vote for them regardless if they give money to Toronto or not. So it's in the best interest of politicians to give Toronto the least possible.