Feature film to focus on migrant workers in Korea

The Korea Herald has an article about director Shin Dong-il's new film "Bandohbi," 'which roughly translates into "female friend" in Bengali', about a friendship between a migrant worker and a teenage girl.

At a press conference following the press preview, Shin said his latest film is just the beginning of a genre that focuses on migrant workers in Korea, and he hopes more films will delve into the issue.

The film sounds interesting, to be sure, but it was the photo that got my attention, since I know the actor. 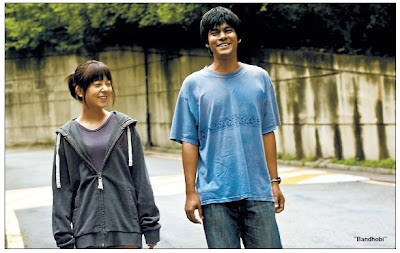 Mahbub Alam Pollob, who appeared briefly in Shin's previous feature "My Friend & His Wife" (2006), said his first role in a feature film was a pure delight. "There were some personal problems I had to deal with, but it was my pleasure to work for this film because it is the first attempt to focus on immigrant workers in Korea," he said.

Baek Jin-hee, who has left a strong impression with her impeccable depiction of a quirky yet likable girl, said she found it a "meaningful experience" to team up with a foreign actor. "The only difference with other Korean actors is that Mahbub Alam Pollob has a different skin color," she said.

Very cool. I haven't talked to Mahbub in quite a while. He was involved with the Migrant Workers' Union from a long time ago, and was a part of Migrant Workers Television (MWTV) when it first started in 2005, and this seems like a logical progression in his activism and work to focus more attention on the issues of migrant workers. As the Herald article says, "Bandhobi," distributed by Indiestory, will hit select theaters on June 25. Episodes of MWTV can be seen here.

As for my ascent to stardom, I was the guest panelist on the Seoul Podcast Sunday night. Hopefully I don't sound too disjointed and incoherent...
Posted by matt at 8:13 AM