Just how much influence does Anti-English Spectrum have?

[Update:
Benjamin Wagner's NHRCK presentation about Anti-English Spectrum makes clear that the statistic used below in both the Kyunghyang Shinmun article and in the official record of Bill 3356 - that "80 percent of those seeking advice at an AIDS counseling center in Itaewon in 2007 were foreign white collar workers and English teachers" - does indeed come from the 2006 BreakNews article that Anti-English Spectrum contributed to. As the presentation makes clear (in slides 110-122), there was no AIDS counseling center in Itaewon in 2007, as it moved to a new location at the end of 2006.]

In a 2009 article in the Kyunghyang Shinmun, he explained that "80 percent of those seeking advice at an AIDS counseling center in Itaewon were foreign white collar workers and English teachers." And now, this group has managed to get this same quote placed in the official record of a Bill pending before the National Assembly Legislation and Judiciary Committee that calls foreigners a "threat" to "our people's health."

I was curious about this, so I emailed Wagner for more information (and he deserves credit for digging these documents up and explaining them to me). The bill is indeed Bill 3356, which proposes an amendment to the Immigration Control Act that could require medical tests of the sort E-2 visa holders now face for any foreigner working in Korea. The purpose statement of the bill reads:

Nowadays, the number of foreigners working in Korea is increasing, but a good many have previous convictions for drug and sexual crimes or carry infectious diseases. As we require measures to deal with the threat they pose to our society’s public order and our people’s health, we herein prepare the legal basis to require that foreigners applying for an employment visa submit a criminal background check and a health certificate. [Source]

Interestingly enough, the person submitting the document argues against the passage of the bill, saying that the health tests that the new bill calls for are already being carried out under Article 11 of the the Immigration Act (which allows for immigration regulations). The example the person gives are the E-2 visa regulations and he or she notes that AIDS tests already fall under these regulations. Therefore, in this person's view, the new amendment is unnecessary.

What's interesting is the footnote to the fact that E-2 visa holders already face AIDS tests:

80 percent of those seeking advice at an AIDS counseling center in Itaewon in 2007 were foreign white collar workers and English teachers. About 60 countries worldwide conduct AIDS tests on foreigners according to the type of visa.

Lee Eun-ung wrote an article in the Weekly Kyunghyang (Shinmun) on February 19, 2009, five days before this report was submitted. In it he wrote that

It was also later revealed that 80% of the counseled at an AIDS counseling center in Itaewon in 2007 were foreign white collar workers and English teachers. [...] According to the Korean Alliance to Defeat AIDS, about 60 nations worldwide conduct AIDS tests on foreigners, depending on the visa. [Translated at The Marmot's Hole]

To see how similar these sentences are in document and the article, let's look at them in Korean.

The first sentence is from Lee's article followed by the similar sentence in the document footnote:

The second sentence is almost exactly the same in both (Lee first, footnote second):

This might not be totally convincing, so here's the smoking gun: In my last post, I mentioned the September 18, 2006 Break News article (here) titled, "At foreigner AIDS testing centers, 80% of users are native speaking instructors." Note above that five days before the document mentioned above was submitted to the National Assembly Legislation and Judiciary Committee, Lee Eun-ung wrote that "80% of the counseled at an AIDS counseling center in Itaewon in 2007 were foreign white collar workers and English teachers."

Lee made a mistake. The article was in 2006. In fact, I searched Naver and Daum for any mention of the 80% figure in 2007 and found nothing except posts referring to the 2006 article. Not only is the almost exact same wording found in the document footnote, but the same mistake is found. And as teachers know, you can always tell someone's been copying when they share someone else's mistakes.

This should make it clear that Anti-English Spectrum has an audience that extends far beyond their online Naver cafe.

But more importantly: Does anyone else find it disturbing that people discussing bills before the National Assembly Legislation and Judiciary Committee are using Break News (or "Inside Story" in it's tabloid paper edition) and a xenophobic online community of unapologetic stalkers as sources? 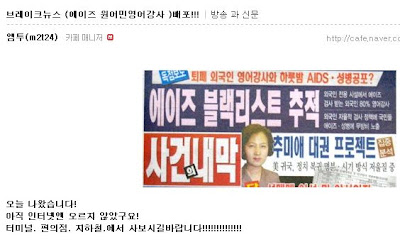 With the connection above made clear, I really start to wonder about the influence the unidentified contributor to the 2006 Break News 'AIDS' article (who the screenshot above strongly suggests may have been a member of Anti-ES) may have had on the 2007 policy memo that led to the current E-2 visa regulations. He wrote that “E-2 visa requirements should be strengthened. […] A medical check certificate (including AIDS) should be added to the documents required for an E-2 visa.” This is exactly what happened, and I'm not sure if there was much discussion of the issue of AIDS and English teachers in the media outside of this 2006 article and the 2007 "AIDS email" story from 2007, which Anti English Spectrum admit they were also behind.

While the use of such unreliable and biased sources as Anti-English Spectrum and Break News by lawmakers drafting bills may seem worrying, it may not be that uncommon. I'll save that for another post, however.
Posted by matt at 8:23 AM

Can someone please volunteer to translate this post into Korean??

Why am I not surprised that 80% of anyone doing ANYTHING in Itaewon are foreigners.

Anyways, the guys getting tested aren't an AIDS concern. It's the guys who don't

Paul the 80% figure is not that 80% of the people getting the tests are foreigners; it's that 80% of the foreigners in the foreigner testing center are white-collar workers and English teachers (i.e., not the manual laborers and workers from other industries who congregate there, too, but with considerably less visibility).

Still, that fact is hardly a surprise, either. If they had checked a facility in, say, Puchŏn or Kuro, they would likely have gotten different results.

Matt wrote:
This should make it clear that Anti-English Spectrum has an audience that extends far beyond their online Naver cafe.

I think that is a distinct possibility, but this smoking gun is not quite a smoking gun. The Anti-English Spectrum people, interested as they are in these issues, may have a person in the legislature who feeds them stuff, just as likely as the other way around.

As for the 2006 article not being found, that would hardly mean it didn't exist. There is an article I was in, back in 2005, that was in several sources but has long since disappeared.

A real smoking gun would be a connection showing that a legislator or aide is directly receiving communication from an AES guy like Lee. Like an email.

Why is it a bad thing to get tested for HIV? Its a common practice.

I don't get the logic:

Lots of foreigners care enough to get tested, so lets make 'em get tested...

But they were getting tested!!

This racist gang is just out to stalk and harrass foreigners.

It's a bad thing, by Lee's thinking, because if we're getting tested then we must think it's possible that we COULD have HIV. God, we are just dirty foreigners after all, so we all must have HIV from our debauchery and sick raping of Korean women at knifepoint.

Koreans don't have or could not possibly have HIV, so there is no reason for them to be tested. We are getting tested, and we all know where there's smoke there's fire.

omg, right. i remember the "English teachers who make a habit of rape by knife-point" quote.