The use of symbolic space in Seoul

I found this shot of the memorial for former President Roh in front of Deoksugung's Daehanmun to be rather interesting. 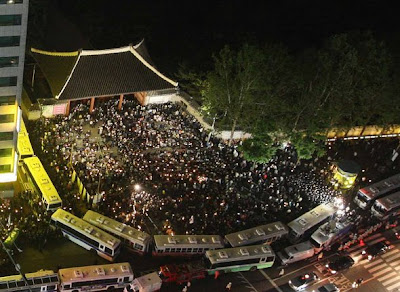 As I pointed out here, this is arguably where Korea's first modern style protest movement took place, back in the days of the Independence Club in the late 1890s. 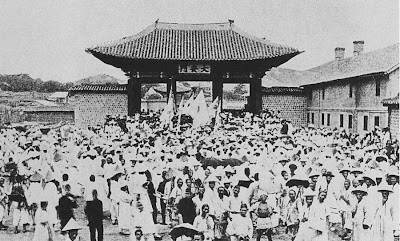 I couldn't help but be reminded of that when I saw this article about Seoul Plaza.

Tension is subtly building up around Seoul Plaza in front of City Hall between police and mourners for the late former President Roh Moo-hyun as certain civic groups are demanding the plaza be open to the public for mourning.

Upon the demand, Seoul Mayor Oh Se-hoon asked the government to allow the opening of the plaza for mourning. However, the Ministry of Public Administration and Security, which is in charge of the funeral preparations, rejected the request.

Since Roh's death, dozens of police buses have surrounded the plaza to block the entry of mourners. 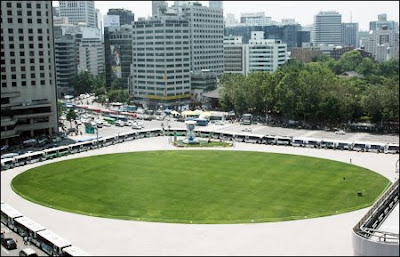 Daehanmun can be seen in the background of the photo above. It was here where large protests took place during the Samil indpendence protests in 1919, which took place after the death of King Gojong.

It was also here where, on July 9, 1987, a million people gathered to grieve for the death of
Lee Han-yeol, a Yonsei University student killed by a tear gas grenade during the democracy protests of June 1987.

It is probably best known, in this millenium, as being the place where red-clad fans gathered to cheer on the Korean team during the 2002 World Cup, back when it was still a paved traffic intersection. 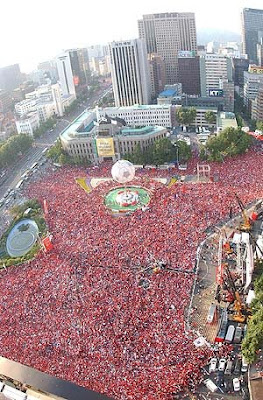 In 2004, Seoul city had it transformed into a grass covered plaza precisely because of its use during the World Cup.

The Seoul Plaza was once a venue for street cheering events by citizens during the 2002 World Cup Korea/Japan and to relive its lively purpose, the city government decided to create an open square covered with grass, where citizens could relax and for various cultural events to be held there. [...]

The Seoul Metropolitan Government hopes Seoul Plaza will be another memorable landmark of Seoul.

I guess it has turned out to be rather memorable, but not in the way the city (then under mayor Lee Myung-bak) planned it. I always thought that it was created to be a promotional space for Seoul City Hall, but they seemed to have had a myopic view of what that space stood for. A month of soccer rallies that did so much to raise Korea's brand value couldn't efface the symbolic meaning that this space has had for a century, and in any case, the planners must have misunderstood the meaning of those soccer rallies to begin with, because they really weren't about soccer, now were they? During the mad cow protests last year, it could be argued that Seoul Plaza had been re-imbued with the symbolic meaning it had during the twentieth century, but filtered through the nationalistic spirit of the soccer street cheering.

Of course, Seoul Plaza was not the only place to suffer this; Lee was best known during his term as Seoul mayor for his reconstruction of Cheonggyecheon, and I couldn't help but chuckle at this comment he made last year:

“Rumors about mad cow diseases baffled me, and my heart hurt to see young students gathering to join in candlelight vigils in the Cheonggye Plaza, the very place I so enthusiastically restored.” 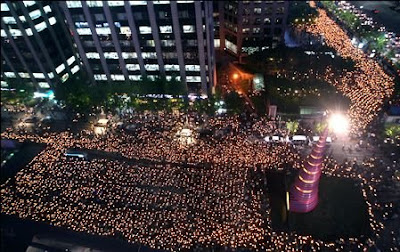 Cheonggyecheon's reconstruction was supposed to be a lighthearted romp through downtown Seoul by his former construction company (and their ilk) on the taxpayer's bill, a way to modernize and rebrand the area in preparation for the razing and reconstruction of much of the downtown core and to put his name in the spotlight as a modern, can-do leader embodying the best parts of Park Chung-hee in preparation for the 2007 presidential elections, not a project to create public space where people could try to bring down his presidency!

Urban space: it doesn't always turn out the way you want it to.


Oh, and the last paragraph of the Times article is worth noting:

Roh's supporters have teamed up with progressive civic groups to launch a campaign to impeach President Lee for orchestrating a "politically-oriented'' investigation and causing Roh's death. More than 70,000 citizens have shown their support, said an activist at the scene. "We will submit a petition containing supporters' signatures to the National Assembly after the funeral,'' the activist said. The anti-government move has gone to the Internet, with cyber campaigns to impeach President Lee underway at major portals.

We may well soon see this space being used in a way the Lee government would rather not, which is precisely why it's being locked down at the moment.
Posted by matt at 8:09 AM

The memorial at Gangnam station has been peaceful this whole time without a single riot police bus, or any other police presence, to be seen. Every night people have been lined up around the block to pay their respects. I posted some video of it here: http://www.youtube.com/watch?v=7aXOoZ4gP_Y

I think you're right that the history of Seoul Plaza is probably the reason behind the police presence.

I also was thinking of the same parallel with King Kojong's death in 1919 being the excuse that protesters used.