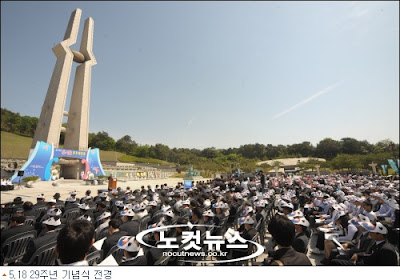 Memorial ceremony at the 518 Cemetery. Photo from here.
Today is the 29th anniversary of the Kwangju Uprising. I've written quite a bit about the uprising before, as the 'Kwangju Uprising' label will attest. A brief timeline is here, there are also background posts about the coups of Park Chung-hee and Chun Doo-hwan, as well as the situation in 1979-1980. I've written more in-depth looks at the events of the uprising, such as the violence on the first day, the escalation of violence over the first three days, forcing the military out of the city, and the retaking of the city by the military (I have yet to look closely at liberated Kwangju or the situation on the outskirts of the city between May 21 and May 27). The single post I'm happiest with is likely this one, about the death and memorialization of a high school girl killed during the uprising.

A bibliography of books in English about the uprising is here, a links to literature inspired by the film are here, and contemporary US news broadcasts can be found here.

This year, as Yonhap tells us,

Prime Minister Han Seung-soo on Monday called for national unity and efforts to build a first-rate state based on the lessons learned from the 1980 pro-democracy uprising in Gwangju.

Speaking at a ceremony to mark the 29th anniversary of the uprising, Han said South Korea is capable of overcoming any difficulty as long as the spirit and lessons of the movement are revived. 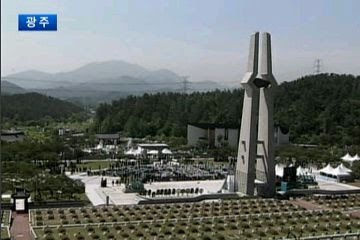 The photo above is from this newscast, which reveals more about the ceremony. After speeches, the attending delegates then released 2009 butterflies (from Hampyeong). Democratic Party leader Chung Se-kyun bemoaned president Lee Myung-bak's absence this year. 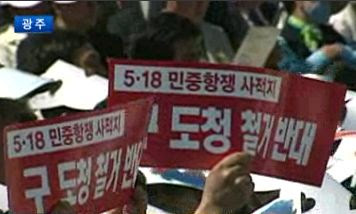 People (local delegates, it seems) protested against the destruction of the old Jeollanam-docheong (provincial hall, which Brian has written about here) which is viewed as a historical site due to its importance during the uprising. If you look at the photos in Brian's post, you'll note that one of the smaller buildings has been demolished in the photo below, taken during festivities commemorating the uprising on May 17. 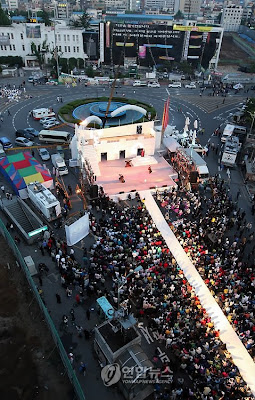 The biggest annoyance of the day was the Hankyoreh's cartoon: 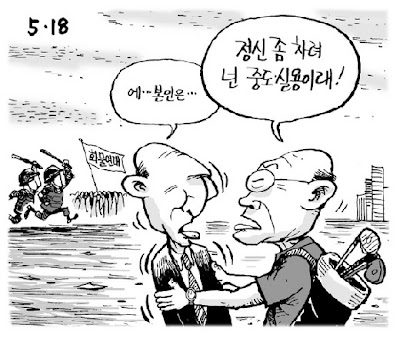 On May 18, 1980, the South Korean military, led by Chun Du-whan, killed several citizens who were demanding democracy. On May 16, 2009, the police brutally arrested members of the Korea Cargo Transport Workers‘ Union who participated in a rally to launch a general strike.

Chun Du-whan, the former South Korean President who is responsible for the Gwangju Massacre, tries to stop the current President Lee Myung-bak from imitating him. Upon hearing Lee opening his speech with the phrase “I am...,” something pundits remarked on Chun’s frequent use of, Chun says, “Why are you imitating me? You are centralist, aren‘t you?”

Yes, Chun Doo-hwan is just like Lee Myung-bak, isn't he? I'd be more pissed off at their hyperbole if they hadn't already made ridiculous comparisons between Chun and Lee twice before. Needless to say, they do a great disservice to those who died 29 years ago by comparing these two leaders and the suppression of these two protests (more about Saturday's protest, inspired by this suicide, can be found here and here). Of course, seeing as that protest was organized in the name of 29th anniversary of 518, (squint at the poster here), perhaps the Hankyoreh's equation shouldn't be too surprising.
Posted by matt at 11:17 PM

I wonder why the Hani never has such cartoons mocking Kim Jong-il who is, after all, the only genuine dictator on the Korean Peninsula.

Oh, right, I'm just an ignorant American imperialist aggressor who doesn't understand anything about Korea and should just keep his mouth shut.

That's for all of your postings on the Kwangju Uprising. You help to bring back many memories.