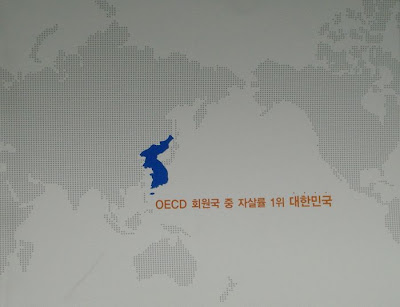 'Among OECD countries the no. 1 for suicide is Korea' 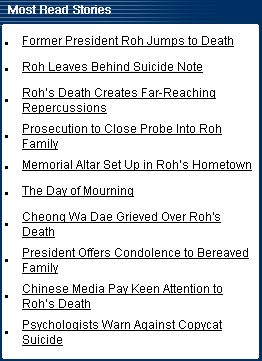 I'm sure everyone was shocked to hear the news of former president Roh's suicide Saturday. I couldn't help but feel that the photo at the top (from this post) was even more pertinent. The Korea Times reports on psychologists fearing that copycat suicides will follow.

Hyun Myung-ho, a psychologist with JoongAng University, said the media's role is very important in a time like this. "The media's tendency to go into details about the ex-president's death can produce more suicides."

Of course, within hours his suicide note was released. What was once a list of entertainers who have committed suicide now contains a former president, and I really have to wonder about the long term effects of such a prominent figure killing himself upon the already high suicide rate in Korea.

I think I'll choose to remember him this way: 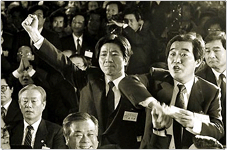 In January 1990, Roh opposed the politically motivated three-party merger between the ruling and two opposition parties. Through this merger Kim Young-sam, a long-time symbol of anti-dictatorship and pro-democracy movement in Korea, and Kim Jong-pil, a symbol of the dictatorial Yushin Constitution, became partners in a coalition government with the ruling party headed by Roh Tae-woo, a former general and successor to Chun Doo-hwan of the Fifth Republic. The ruling party needed the merger to secure a majority in the National Assembly. Roh Moo-hyun opposed the merger citing it as an act of betrayal against the interests of the public which desperately wanted a new, democratic regime.

Oranckay wrote about this years ago, but his blog no longer exists. Essentially, the public had voted against Roh Tae-woo's party in the national assembly, and Kim Young-sam's party agreed to the merger in exchange for having the way paved for Kim to become the next president. The motion was passed quickly, and it was assumed no one would object. Roh did, however, and paid a political price for it, as he would lose subsequent National Assembly elections.

While some have assumed that his death would be used politically after the mourning period, it seems it's already starting. Roboseyo took photos and video of confrontations between police and mourners at the memorial in front of Deoksugung Saturday afternoon, while Scott Burgeson has posted photos of protests that took place that night.

More on Roh can be found here and here.
Posted by matt at 8:46 AM

A couple of the protesters at Doksu Palace actually told me that Lee Myung-bak was responsible for Roh's death. I asked how but all they could say was "There are many things under the surface that you don't know." When pressed for more details, they had nothing more to offer. I then asked, "If he didn't do anything wrong, why did he commit suicide?" This of course upset them, but another guy came up and shook my hand and said, "I agree with you," before quickly walking away. Several other people were yelling at MBC cameramen and telling them to leave; I watched MBC for a few minutes on Saturday evening and they were clearly being partisan, for example airing an angry speech by a Democratic Party Assemblyman denouncing Lee Myung-bak and the GNP for causing Roh's death and laying into the "ChoJoongDong" as well, but MBC failed to offer an official response from the Blue House or GNP to counter such charges. I wonder how long it will by before PD Such'op weighs in with its own "provocative" take on this whole affair?

No King Baeksu, this goes deeper. I want to know, the details. The prosecuters. What do they the know? And can tell there is no hysteria in Gimhae. It is mourning. Just this.

If he was innocent, he would have fought back. He was a lawyer, for chrissakes!