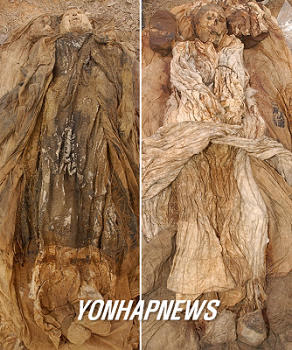 Photo from here.
The Joongang Ilbo has a fascinating article on 'accidental' Joseon era mummies:

During the Joseon Dynasty (1392-1910), the upper classes placed their dead in hoegyeok, a type of tomb. The corpses were put in double-sided coffins and covered with a layer of a limestone mixture, or hoe. This process completely isolated the body from water and air, which cause decay.[...]

The exceptional quality of the mummies, artifacts inside the tomb and body parts, from the brain to the intestines, has allowed scientists to answer questions about everyday life in those times. They were able to identify not only the cause of death but also what the usual diet was and the rampant illnesses of those days.

Read the rest of the article here. 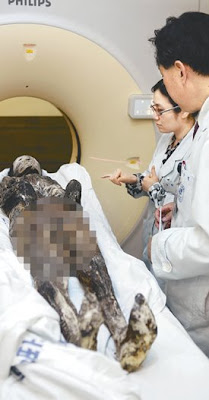 Yes, censor that mummy! If you don't, who knows how it might affect the youngsters who come across it!
Posted by matt at 8:27 AM

absolutely censor the dummy, I say! You never know what zombies might be watching, and scandalized by such imagery. Zombie children go mad when they're corrupted, you know.

I think blurry bits, or pixelated parts, are funny euphemisms for genitalia, when living in Korea.

off topic, but 'ask the expat' directed me to you. He said you may have some good sources, so...do you know where I could find old maps of Pyeongtaek/South Gyeonggi-do (ancient-1980 ish)? Photos too I guess.

Any ideas would awesome, thanks!

The University of Texas has a large Korean map collection, including Korean War-era topographical maps. Pyeongtaek is on this map, and the area right to its north (and Seoul) are on this map. This site (from SNU) has Joseon-era maps from 1872 (but doesn't seem to work at the moment). Set the search for '고지도'. I'm not sure what the name of the area was at that time, but you'll need the name of the 현 or 부 (this page suggests it was 진위현, while this page suggests it was 직산현).

I can't suggest much for pictures, though this site, looking at Osan Air Base's history (technically it's in Pyeongtaek-si) has lots of the surrounding community.

this is very useful, plenty here for of leads for me to follow. thank you matt!