I picked up a few classic Korean films recently, among them Petty Middle Manager, a comedy released after the April 19, 1960 uprising (and which is almost worth it for the packaging - not bad for $10), the 1979 film version of Sonagi (which gets no points for packaging - it doesn't even say what year it was made, nor are there subtitles, which is pretty lame). I haven't watched those yet, but have watched two films in the Kim Ki-young box set, one of them being the 1975 film Promise of the Flesh. Though it becomes rather melodramatic by the end, the route it follows is pretty entertaining, and the first half hour, which views through a surrealist lens the events which turn the main character into a man-hating killer (and sets them to menacing psychedelic music) is worth the price of admission. But this post isn't about that. Instead, I'm going to look at Seoul as presented in two films. Here are three photos of the Daewoo Building across from Seoul Station under construction (in 1974 or 75) taken from Promise of the Flesh. 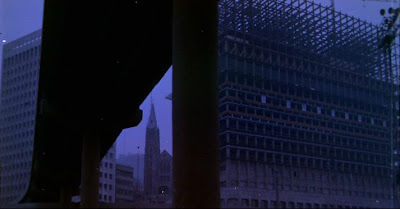 Visible there is Namdaemun Presbyterian Church, which is also seen in this scene, from behind: 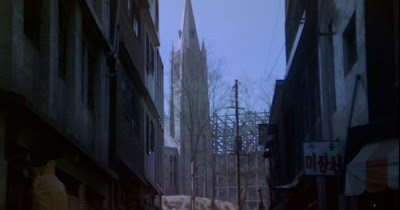 The Daewo0 Building is also barely visible above. I rather like this photo too: 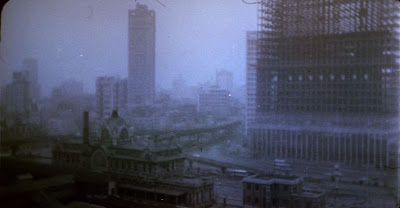 According to this article, the building is supposed to be remodeled. It also says that it was finished in June 1977.

Another movie I found on dvd last year was another film from 1975, Youngja's Heydays, about a girl who comes to Seoul from the country and falls into prostitution. Though it heads into melodrama territory by the end, the first half of the movie makes it well worth watching. Unlike in the film A Single Spark (about the life of Jeon Tae-il, and released 20 years later) no one needed to recreate the sweatshops that appear in the movie (well, if they were recreated - it's likely they still exist today, though things are getting better for some of the more skilled workers). 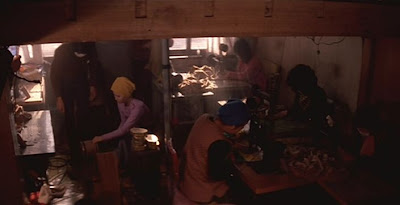 Note the dosiraks on the stove. There are scenes in many locations in the film - here's one in a bar.

There are also city scenes in the film, such as those below (which may be of the Cheonggye expressway, but I'm not sure).

One of the more interesting scenes is in a desolate area with makeshift houses and apartments visible in the background. 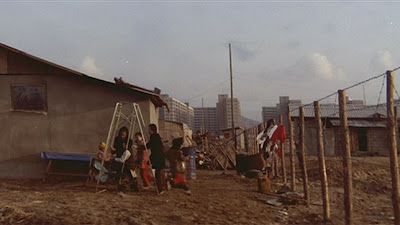 What became interesting was seeing the scene below. Notice the building on the right? 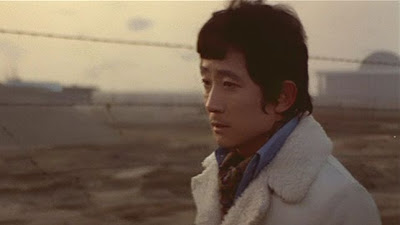 I thought Yeouido would have been more developed in 1975 (the scenes were likely shot in 1974), and wondered if this could have been taken near Dangsan-dong, or across the river, but I soon realized that if you looked at the orientation the apartment buildings in the background above, they looked quite similar to the Yeouido Sibeum apartments, seen here in what is said to be 1971, but must be later. Notice the unfinished National Assembly at top center (click to enlarge). You can seen two other buildings to its right.

Those buildings also appear below, at top center, while the edge of the National Assembly as at far left:

A close up of the buildings from an earlier scene... 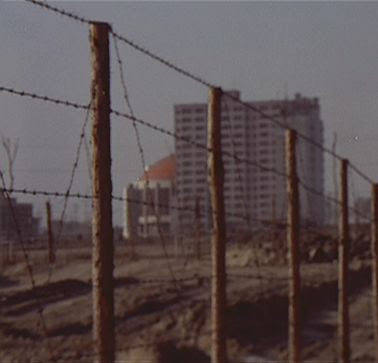 ... reveals them to be the Chowon Apartment, right, and behind it is the Yoido Full Gospel Church, which Wikipedia tells us was completed in 1973. Who knew? Again, it's visible in the black and white photo above. Below we see construction going on next to those makeshift houses.
Again, the only apartments on Yeouido that correspond to that layout is are the Sambu Apartments, which were finished in 1975. If you could see beyond the apartment at the left, you could also see the Hanyang Apartments (1975) and, next to the Sibeum Apartments, the Samik and Eunha Apartments (1974). Really though, there was next to nothing on Yeouido at the time.

Were these people squatters? Were they running restaurants to provide food for the construction workers? To be sure, I had no idea people lived like this on Yeouido while it was being built.

It would be a few more years before the Island's most famous landmark would be built:

Of course, the 63 building will have some competition in the near future, as long as there are no more cave-ins.
Posted by matt at 2:30 AM

I've been watching that collection as well. Insect Woman has a lot of new or under-construction architecture in it too. Some of it is almost a visual joke, such as when they go to relax at the waterside and it's some kind of cooling plant or sewage outflow.

The house reminds me of the story of the time my father-in-law built a Western-style ranch(?) house in the middle of Itaewon. It got robbed constantly because it didn't have a wall around it.