Back in October of 2001, I went to a wedding in Korea for the first time. I've been to many since then, but it still rates as perhaps the oddest. It took place in eastern Incheon. 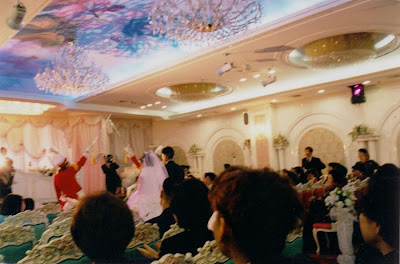 When the bride was brought down the aisle, two female wedding hall staffers dressed in quasi-military (think 18th-century Britain) uniforms crossed swords overhead and the bride passed underneath them. The ceremony that followed was fairly typical - as everyone who has been to a wedding at a Korean wedding hall knows, the guests chatted with each other as the wedding took place, the service was over fairly quickly, and a dull roar came from the lobby due to the people waiting for the next wedding service talking to each other or on their cell phones.

One thing I'd never seen before or since was the use of hand-held streamer 'blasters', which were kind of like larger versions of the cone-shaped crackers that come with store-bought cakes here, but looked like a cross between a trumpet and a sawed-off shotgun. They blasted streamers a good forty feet down the aisle: 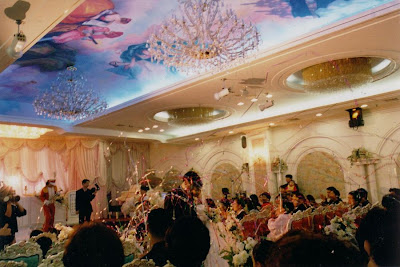 At far right above you can see one of the employees in quasi-military uniform holding the 'gun' from which the streamers were fired. Next, as the couple walked up the aisle, the groom's friends rushed at him with spray cans. 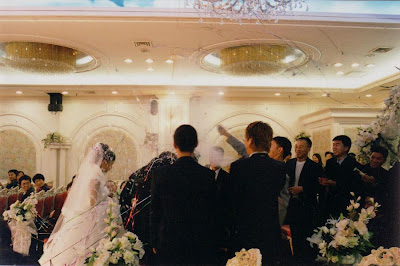 The cans sprayed a confetti-like substance all over the groom. 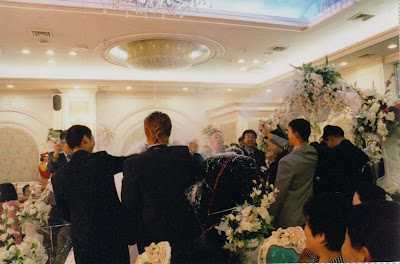 I haven't seen anything like that since either (nor have I had another chance to try fried grasshoppers, which were included in the buffet lunch, and which were actually pretty good) . My first thought was a pretty typical one, being that this style of wedding in Korea seemed to approximate the form of a western wedding, without, as Bruce Lee described it, "emotional content." Or perhaps that isn't fair at all - perhaps it would be better to describe it as a cookie cutter, one-size-fits-all style of wedding that lacks the personal touches that I've seen in weddings in Canada (A friend of mine got married in Seoul last fall and was quite annoyed that they had to choose 50 photos for the photo album provided by the wedding hall, because only 30 or so were really good. He and his wife's desire for only 30 photos was met with insistent replies
that 20 more be chosen, and they had no choice but to give in to this, as they had more pressing concerns).

Of course, this kind of 'form without content' wedding doesn't only exist for western-style weddings; the next wedding I went to was a traditional wedding - at Lotte World. Lotte World has a folk village, and that's were it took place, complete with a pooping, squawking chicken, samulnori drummers, and a gama to carry the bride and groom (a gama is a sedan chair or palanquin, from which Paris Hilton can be seen exiting here). I was actually asked by the groom to help carry the gama (it was the first and last time we ever spoke). We carried the couple about 100 feet towards the dining area, turned around and came back. The posts which we held to carry it were not rounded (as in, cylindrical) but square, and considering how heavy it was, the edges quickly began to dig into my skin. Needless to say, being a sedan chair carrier would not be my first choice for a job.

I think the longest wedding I ever went to was a Catholic service at a Catholic Church (about an hour, including photo-taking), while the shortest was 5 minutes (after I showed up 5 minutes late). I've never been able to decide if a 10 minute wedding is a good thing or a bad thing...

Note: I should add that these were city weddings; weddings held in the countryside tend to be more traditional and perhaps a bit wilder (or so I've heard). One tradition out east that a student told me about was tying the groom's hands to the bumper of a car (with enough slack so he could stand up) and driving away at a speed that forced him to run behind. This was eventually banned by local police, but continued despite this (unsurprisingly enough).
Posted by matt at 9:19 PM

Thank you for sharing your experiences. Next month I will attend my first Korean wedding and I am looking forward to it: The bride and groom will have a "western" wedding and a Korean traditional wedding.