Symmetry in The Host

I watched The Host again a few weeks ago before reading Gord Sellar's posts which examine the film in a number of contexts. If you haven't read them, and are interested in the film (or in Korean monster movies in general) then they're well worth your time, and can be found here and here.

On watching the film again, I'd noticed a bit of symmetry I that I hadn't picked up on before: 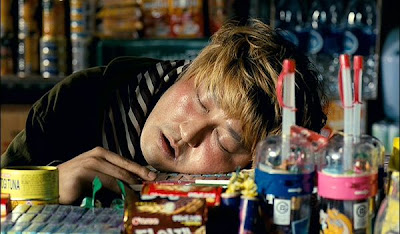 The first time we see Gang-du (played by Song Kang-ho), he is asleep at the snack booth. The first time he is seen with another character in the same shot, it's a little boy trying to steal some food. 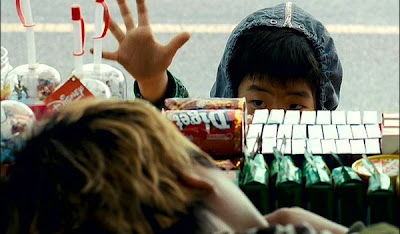 The boy's brother then whisks him away before he gets into trouble. The next time we see the little boy and his brother, they are sneaking around a riverside park at night and breaking into a snack bar. Then they encounter the monster. 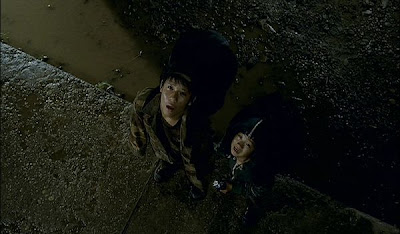 The boy is saved by Hyun-seo, and in the final scene of the movie, and the last shot in which we see Gang-du, he is again with the boy (and again, food is involved). 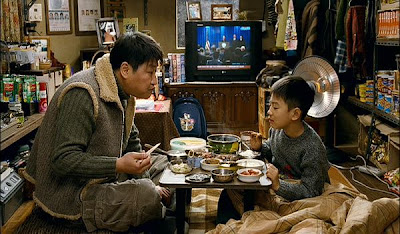 The other thing I noticed was that, again at the beginning, after his encounter with the boy, Gang-du is sleeping and his father is watching him and shaking his head in disbelief when suddenly a girl calls out to her father. Gang-du awakes with a start, thinking it's his daughter Hyun-seo, but he has mistaken another girl for her. 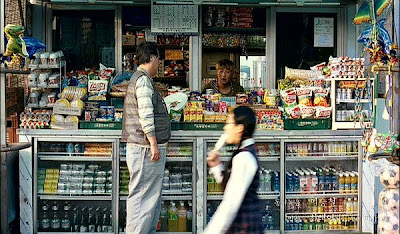 It won't be the last time he mistakes this girl for his daughter... 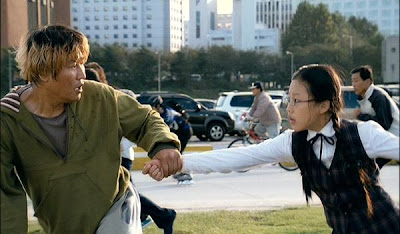 Unsurprisingly, he makes the same mistake twice.
Posted by matt at 2:28 AM

Thanks for the link.

There's further symmetry there, since the kid who tries to steal a snack, and then later "does seori" with his older friend, ends up being snatched up as a snack by the monster.

Similarly, when Gang-du fails to grab his daughter Hyun Seo's hand, the monster snatches her up instead.

And the younger boy gets saved twice by older kids: once by the older boy, and once by Hyun Seo.

There may even be something of a parallel between the monster, who must have been starving down in the Han River until it discovered it could eat those big tasty humans, and Gang-du, who is not only klutzy (like the monster) but became that way because he didn't get proper nutrition when he was young.

Pretty tight, that. Things always coming back is a hallmark of a good script. Let's hope Kangfull's done up one just as tight for the prequel!

bong joon-ho does seem to relate character arc of survival to food for both humans and monster, though i really can't see a precise double of gang-du & the monster. aren't their ideological position simply too different, with any parallels an ironic one at best - because they're both passive agents, products of external forces simply brought together at odds with each other, as the larger conflict is an universal one of survival (necessarily involving food & intermittent rest before "the big conflict"?) what about their different "diet habits"? gang-du has some conscience as "businessman", so he snatches only one tantacle of the squid (?) he sold, while monster gobbles up an entire person? he seems to eat anything but has favorites. the monster doesn't seem to have logic of what he'd eat, but does have some discerning taste?? ahhh this is making my head hurt.

and if being klutzy and gluttonous is significant, what of the very obese man that was eaten by monster? he was also shown as part of the korean populace, wolfing things down only to be part of the food chain later. i guess there's another post alone, in canned sodas too (emptied in one gulp, direction of chucking the can afterward...sorry i kid:P)