The Korea Times had an article back in February about a new player in the tobacco industry:

Woori Tobacco ― the first local licensed cigarette maker funded with private capital ― kicked off business last month, claiming it has what it takes to challenge the overwhelming lead of the market's No. 1 player, KT&G. The manufacturer, which won last year a government license to produce and sell cigarettes, rolled out two flagship brands, Wigo and Swing, in mid-January for domestic and overseas sales.

"Advanced filters, customized production and localized marketing are three standout characters that differentiate us from our competitors,'' Hong Won-kie, the company president, said in a Korea Times interview Tuesday.

And if those characters don't sell, why not shamelessly appeal to cheap nationalism? 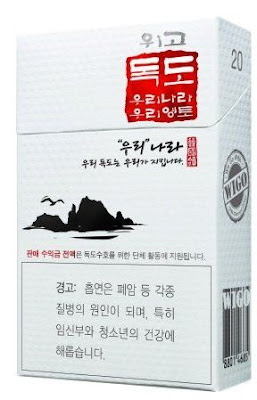 Wigo Dokdo, Our Country, Our Territory
"Our" Country, We will defend our Dokdo
It's nice to know there's at least one more accessory available when you go out dressed to the nines in your Dokdo wardrobe.

I was on a bus the other day and noticed, among the warnings to not touch the doors and watch out for motorcycles, a new warning I'd not noticed before: 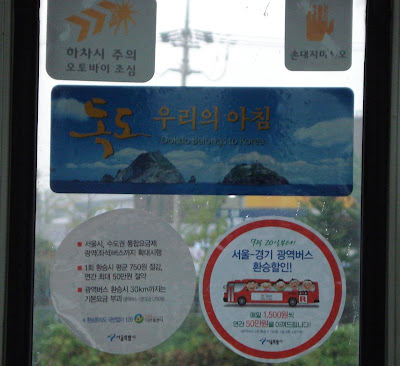 In English it says, "Dokdo belongs to Korea," but in Korean it says, "Dokdo, our morning." I'm not sure why the bus company felt compelled to equate Korea's morning with Dokdo (Land of the morning Dokdo?). Perhaps it encourages more repeat business? At any rate, let's hope it doesn't cause 'Japan' to retaliate and start putting stickers on its buses reading, "Takeshima, our evening," because then you just know things will start to get ugly.

Still, things aren't as wild and wacky as 2005; there are no bee men, childrens' drawings, or video games featuring monkeys that look like former Japanese prime minister Koizumi. 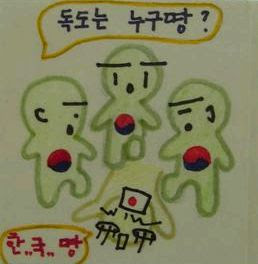 "Dokdo is whose land?" "Ko..rea's... land"
Leave it to a child to get to the heart of the matter. After all, there's only one way to correct a wayward foreigner's opinions, right? On a lighter note, I do think the above photo would make a cute t-shirt, or would be great for stationery.

I think they refer to morning because Dokdo is considered Korea's easternmost point, and thus the sun rises first on Dokdo. I've seen that referred to a few other times.

It´s very hard to break into the tobacco market with a new brand, because most smokers prefer to smoke the brand they have been used to.