Update - Here is the Mad Cow Disease episode of PD Diary on Youtube (some screenshots have been added below): 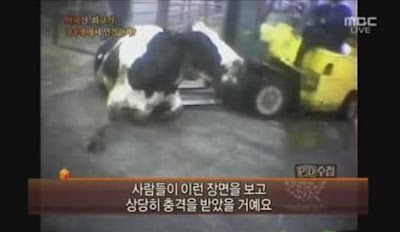 PD Diary as been criticized lately for its US beef report which set off fears of mad cow disease here. First, there was its faulty use of genetics:


In a thesis published in a foreign scientific journal in 2004, Kim said 94.3 percent of Koreans carried a gene called MM (methionine-methionine). That’s a much higher ratio than the 37 to 38 percent of Americans or Britons who carry that gene. Until now, all 207 humans around the world who have contracted CJD are said to possess the MM gene. Based on this, the MBC news program “PD Diary” broadcast a segment saying Koreans were two to three times more likely to contract CJD than Americans or Britons. 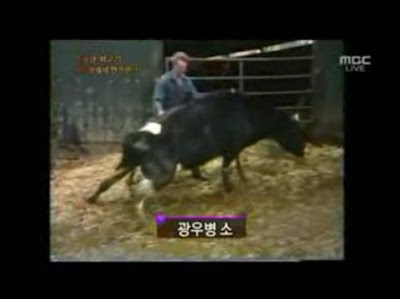 "Cow with Mad Cow Disease"
Then there was its use of images of downer cows, which did not have mad cow disease, along with another claim that it was told to apologize for:


The MBC news program “PD Diary”, which broadcast the report on mad cow disease showing a staggering cow being dragged into a slaughterhouse and an American woman in her 20s said to have died from Creutzfeldt-Jakob disease -- the human form of the bovine disease -- has been ordered by the Press Arbitration Commission to air a statement saying the two key points made by the program are untrue.

The claim about the woman who died from Creutzfeldt-Jakob disease was also problematic:


"PD Diary" allotted 14 minutes of airtime reporting on the woman who died earlier this year, and carried an interview of her mother saying her daughter may have died from "CJD" (Creutzfeldt-Jakob disease). The news program carried a translated subtitle of the mother's comments, which misquoted her as saying the probable cause of her daughter's death was "vCJD". VCJD is a disease caused by eating beef from cattle infected by mad cow disease, while CJD is a disease that has nothing to do with cows. "PD Diary" portrayed a person who died of an illness completely unrelated to eating beef as having perished for just that reason. 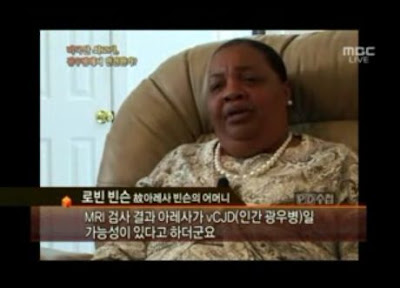 The woman talking said, "The results had come in from the MRI and it appeared that our daughter could possibly have CJD." As can be seen above, PD Diary subtitled it "vCJD (Human Mad Cow Disease)." The photos of the victim in the hospital (just one of several victims shown to viewers) likely made a strong impact. 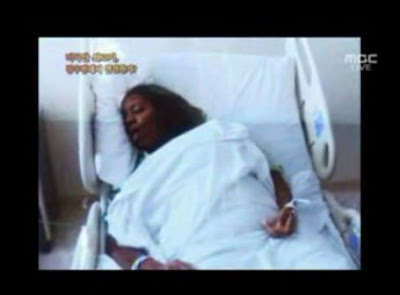 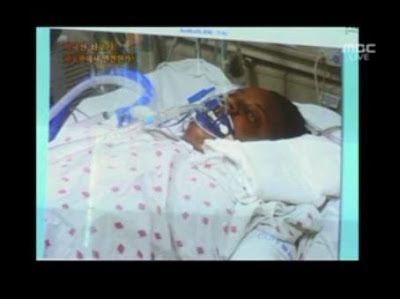 It has also been confirmed that this woman did not die from vCJD. There is actually a section of the program that interviews people in the US who are critical of the system there, which might have been a worthwhile program if the show had compared it to Korea's system. Oh, and not lied about some of the strongest images in the show. It was likely the clip of a CNN report from earlier this year about downer cows being slaughtered and their meat sold and used in school lunches that provided the seed that would germinate into a fear that this kind of meat would end up in Korean students' school lunches. 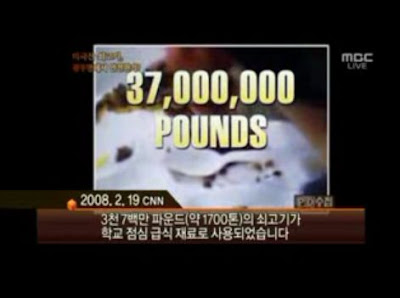 With such blatantly wrong subtitles and lies, its surprising the government didn't try to combat it more at the time. Having missed its opportunity then, the government has decided to take action now:


The Ministry for Agriculture, Food, Forestry and Fisheries on Tuesday said it will file civil and criminal charges against the MBC current affairs program “PD Diary.”

Is there precedent for charging a broadcaster in Korea? I don't know, but there's certainly precedent for PD Diary's behaviour. The program may now be remembered for being right about Hwang Woo-suk, but there were some problems:


On Nov. 22, [2005] “PD Diary” aired its expose, including revelations that the junior researchers donated egg cells and women were paid for occyte donations. The “PD Diary” producers have reportedly commissioned an independent authority to check Hwang’s documentation. [Later,] MBC's “PD Diary” said a researcher on Hwang’s team who took part in the somatic cloning of stem cells claimed the results published by Science in 2004 were a collection of falsehoods. [...] The geneticist’s side says “PD Diary” turned members of the team against one another and used hidden cameras in their efforts to dig up dirt on Hwang.

MBC would take its criticism of Hwang further:


[On] Thursday [December 1] on its Newsdesk program, Munhwa Broadcasting Co. reported that the producers of the documentary program “PD Notebook” had conducted DNA analyses on five cloned stem cells that they received from Dr. Hwang and that two of those cells did not have DNA matches with the original somatic cells. The news program reported that the DNA in the three others was “unreadable.”

Criticism mounted against MBC for taking on a national hero, and PD Diary was pulled off the air. It was announced on December 6 that


Munhwa Broadcasting Corporation will suspend the producers of PD Notebook for violating journalistic ethics in the process of making a documentary questioning the authenticity of stem cell celebrity Hwang Woo-suk’s results.

There's nothing like violating journalistic ethics in order to report on the ethical lapses of others. The Joongang Ilbo editorialized on this (and reported on such investigative shows in Korea):


The MBC network’s program, PD Notebook, is under fire over ethics issues. The program had violated journalistic ethics by threatening sources with arrest. Even if it turns out that Dr. Hwang Woo-suk’s papers were faulty, as PD Notebook claimed, its illegal methods would still be a problem. The inappropriate investigation and coverage affect the credibility and accuracy of a report. Journalists pursue exclusive scoops, national interest, social justice and truth. However, they cannot ignore proper procedures and steps.

On January 10, another Joongang Ilbo editorial looked at PD Diary's triumph after it was put back on the air, calling it "victorious yet tarnished." As it produced more shows criticizing Hwang's work, readers were told that the "Munhwa Broadcasting Corporation will air a program tomorrow questioning the veracity of his cloned cow." It's nice to see that PD Diary's interest in cows isn't so new. It was 10 years ago today that the Hankyoreh published an article criticizing PD Diary for its sensationalism, saying that it had no self respect and was interested only in ratings. On June 16, 1998, PD Diary aired an episode titled "Wonjo Gyoje – The teenager’s new part-time job." (interesting that 아르바이트 - arbeit, or "part-time job" was in use then - I thought it was coined more recently). Using hidden cameras, they talked to girls and even waited outside an inn and followed some of the customers, recording their conversations ("My wife would beat me to death if she knew"). A high school girl says that "Of the 50 girls in my class, 20 are doing wonjo gyoje." PD diary confirms this by... oh wait, it doesn't. Up until that point the Korean media had reported on wonjo gyoje taking place in Tokyo, and how the growing phenonmena of Phone Rooms might lead to it taking root in Korea, but, after searching through every 'wonjo gyoje' article between 1997 and 1999, it seems no one had reported on its existence in Korea until PD Diary did. Irresponsibly reported though it was, the shocking statistic of "40% of girls" did its job. On September 4 the Korea Times reported that


The Commission on Youth Protection under the Prime Minister's Office has intensified legal provisions aimed at cracking down on "casual sex" and prostitution involving minors, it was learned yesterday. Adults found to have given money to minors in return for sex will be put behind bars for up to a year.

The next day, as the Munhwa Ilbo reported on the 9th, two middle school girls 'imitated wonjo gyoje' when they approached a man in his 40s saying "Let's go for drinks together." When he pulled out his wallet to buy cigarettes they tried to steal it, but were caught. Funny how the media was looking for anything that might be akin to wonjo gyoje. It wasn't until October 12 that the first report came of a man arrested on suspicion of having had paid a 14 year old girl 100,000 won to go to a video room with him. This was four months after PD Diary's episode had been broadcast.

The new law was a good idea, but its likely it was influenced by the inflated numbers and sensationalist reporting. "Victorious yet tarnished" would seem to apply to the 1998 and 2005 programs, but this time it's not in possession of the facts, its arguments are full of holes, and the sharks are starting to circle.
Posted by matt at 4:33 AM

"(interesting that 아르바이트 - arbeit, or "part-time job" was in use then - I thought it was coined more recently)"

Koreans have been using the term 아르바이트 since at least the 1970's. I believe that the Japanese first used it to mean part-time jobs, and then it crossed over to Korea.

Matt, good post, but you're not going to convert any liberals here in Korea using Chosun and JoongAng as sources to debunk PD Such'op's mad-cow program. I would try to use some non-Korean sources if I were you and looking to make an iron-clad argument.

I thought a quick review of the Bush's terribly flawed and failed mad cow disease policy, from the illegal feeding of literally millions and millions of pounds of highly suspect, and banned mad feed, to the failed BSE surveillance program, all of which exposed, needlessly, millions of people to the mad cow agent i.e. Transmissible Spongiform Encephalopathy. ...

48 hour traceback for BSE mad cow disease in the USA ???

NOT in your lifetime !

8 YEARS IN REVIEW OF THE MAD COW DEBACLE IN THE USA ;

Stumbled upon this post whilst doing some fact finding about the June 13, 2002 tragedy I was witness to in Korea. I am in search of an old PD Notebook episode from 2005 or 2006 about the incident, as I was interviewed. If you could point me in the right direction, I'd be very appreciative!