Police yesterday opened their investigation into the kidnapping of a 12-year-old elementary school girl in order to obtain public help. Daegu Dalseong Police Precinct announced that two men in their 20s broke into a house in Dalseong County, Daegu at around 4:10 a.m. on May 30 and started beating the girl’s 71-year-old grandfather, identified only by the last name Hur, in the main bedroom. The man’s eldest granddaughter, Hur Eun-jeong, tried to stop the attack and was kidnapped, police said. Eun-jeong’s younger sister, 10, was hiding in the next room and called the police. 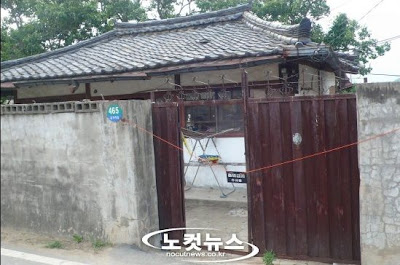 The house she was kidnapped from.

“I was lying down when a man entered my room and started punching me in the face. After a while, the other one helped him and then they kidnapped her,” Hur said. “One of two said, ‘I came here to kill you.’”

Investigators presume that the two suspects have a grudge against Hur because they have made no ransom demands and did not steal anything from the house. The two schoolgirls live with their grandfather, away from their parents, due to financial problems in the family.

Police have discovered that the missing girl called a close friend three times between June 1 and 2. “According to her friend, the missing girl said, ‘I was released after being kidnapped,’ on the phone,” the officer said. “However, she did not call us. We are now trying to discover her whereabouts in order to gain some clues into the case.”

Police had been conducting a closed investigation, but opened the probe to the public yesterday after failing to make any progress in the case. They cited the lack of a ransom demand as a source of difficulty, compounded by inconsistent statements from the injured man.

A YTN video from June 4 can be seen here. The Korea Times also had an article from June 4 titled "13-Year-Old Schoolgirl Kidnapped for 7 Days". I find it interesting that Korean news articles report that she is in fact 11 years-old (using western reckoning), while an English language newspaper used Korean reckoning. Makes a lot of sense. At least it included a photo of her: 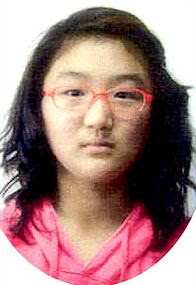 One other mystifying thing about the Korea Times article is that it didn't mention where the kidnapping took place! Maybe readers wouldn't mind knowing if such things are taking place in their backyards. For example, there was the rape of an elementary school girl that took place in Deungchon-dong, which is very close to my house. A quick search at Naver turns up... two more cases than I expected. On April 23, two girls (13 and 14) were raped by a (Korean) soldier on vacation and 16 year-old, who they met after chatting on the internet and drank with in a park in Deungchon-dong. On April 10, a 76 year-old man raped a 12 year-old after seeing her on a street in Gangseo-gu and inviting her to his house to eat 'something delicious'. Perhaps someone needs to streetproof their child better. I finally found the case I was thinking of, which YTN reported on, where a 12 year-old on her way home from a hagwon was raped in the underground parking lot of her apartment. The perpetrator was obviously prepared: 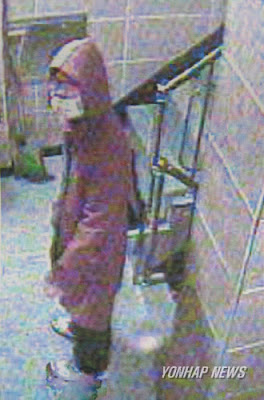 Back to the case in Daegu, as this June 6 article notes, something that the English language media hasn't mentioned was the fact that the "close friend" who talked to the victim "three times between June 1 and 2" had actually been lying about it. You'd think a 15 year old might know better than to tell lies during a kidnapping investigation. At any rate, here's a map of the area where this occurred: 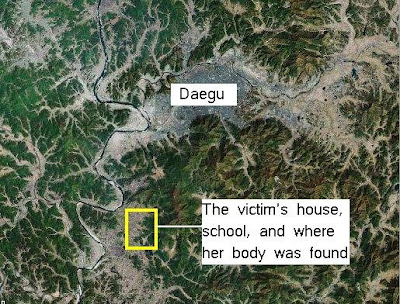 A 12-year-old girl, kidnapped from her home two weeks ago, was found dead yesterday in her own neighborhood, Daegu Police said yesterday. Police officials found the body of Hur Eun-jeong at around 5 p.m. yesterday in a valley about two kilometers from her home, the Dalseong Police Precinct of Daegu said. The body was naked and severely decomposed. 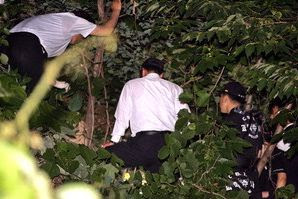 Police at the site (source).

The last in a series of searches for the kidnapped girl began yesterday morning in a five-kilometer radius of her home, as 440 police troops, a helicopter and six search dogs joined the operation.

Here's a photo/map of the area (from here): 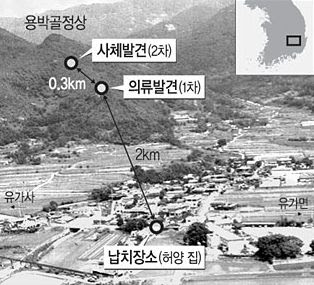 Her clothes (she was wearing shorts and a t-shirt when she was kidnapped) were found 300 meters from her body. Perhaps it's sometimes good not to have everything translated to English, as this article goes into more detail on how the decomposition of her body has rendered it very difficult to determine a time of death or whether or not she had been raped (which police strongly suspect). A little more information can be found here. This YTN video looks at the discovery of her body, while this MBC video does the requisite "Let's go to the victim's school and take photos of her crying classmates" report. 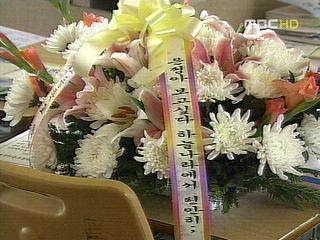 Flowers and letters from her friends sit on her desk. Below we can see her classroom and classmates, as well as her flower covered desk on the right. 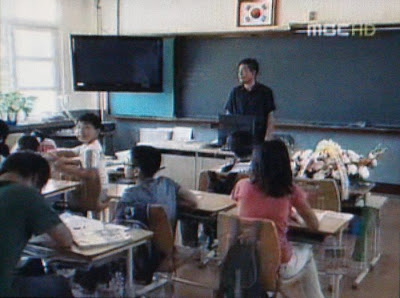 The MBC article mentions that the school is Biseul Elementary School, whose website I found in seconds by googling it. It dawned on me that it was likely a small school, and it might be easy to find photos of her. The third photo I clicked on presented this image, taken May 17: 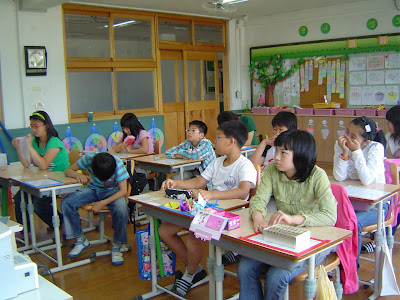 The girl in the green shirt on the left, I thought, looked like her. A quick look at the MBC video (the still above) revealed that the two boys in the middle of the above photo are in the MBC video, and the desk at which the green-shirted girl is sitting is the one with flowers on it. The girl covering her face at right is the one crying in the MBC video. As it turns out, there are dozens of photos with Hur Eun-jeong in them: 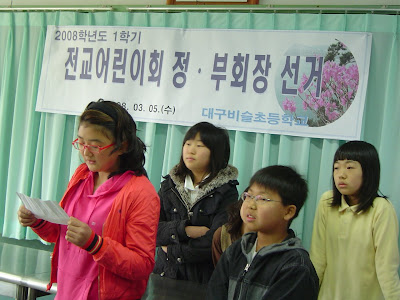 The above photo shows her at left during the opening ceremony for the school year in March. The school is so small there were only three children entering first grade. Though the school wasn't so small that they couldn't have native teachers teaching them English - in this case US soldiers (It may not have been a very regular thing; I'm not sure). An entry on a bulletin board for grade 6 students from May 31 is titled "Find Hur Eun-jeong, Please Find Her" and has comments from people saying they miss her. 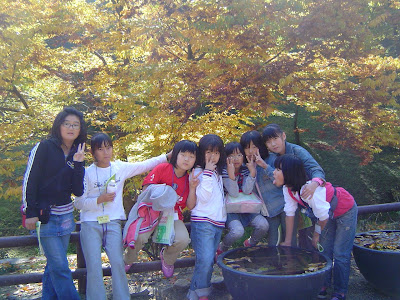 It also seems that for some field trips the whole school would go. Hur is seen at left above and in the center below. 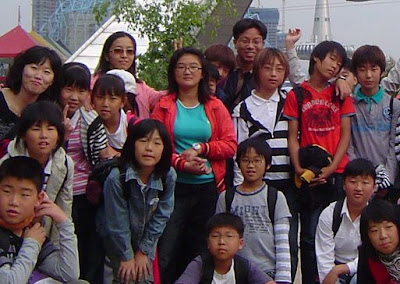 The eeriest photo? A month and a half before her kidnapping, her school went to the Daegu District Police Office for traffic safety training (Hur is at far right). This same office is now in charge of her murder investigation. 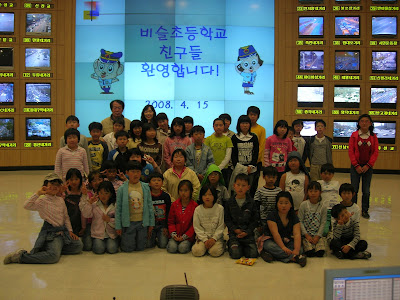 Some people are criticizing the police investigation into her kidnapping:

Initially, only 80 police officers and volunteers searched for Hur Eun-jeong in a one-kilometer (0.62-mile) radius of her home. When they broadened the search area and enlisted more policemen Wednesday they made the gruesome discovery. Eun-jeong was found in a remote area 2.3 kilometers from her home. In the end, 510 team members along with two rescue dogs were used, according to police.

“We could not call out more policemen because they were dispatched to the candlelight demonstration sites in Seoul and Daegu,” said Ahn Jae-gyeong, an officer on the case. Police originally said that Eun-jeong was probably a runaway after they got a report from one of her friends saying that Hur escaped from her abductors on June 1 and was safe. The friend’s information turned out to be false.

In addition, it took seven days for police to ask the public for help and to offer a 5 million won ($4,794) reward for information leading to her discovery. Police are now investigating 60 sex offenders who live near Eun-jeong’s home. Kyungpook National University Hospital failed to find the cause of death in an autopsy yesterday. “Her body was badly decomposed,” Ahn said. “Also, we could not confirm whether someone raped her or not.”