A few years ago I had an adult student appear once in a class. He and the other students introduced themselves, and another student asked him if he was married. He then asked me if I knew of Flight 007. I didn't, and he told me that it was a Korean Air flight that had been shot down by Russia (in 1983) and that his wife and son had been on board. I never saw him after that class, but I went home and searched about for information on the incident (such as here). Years later, Flight 007 came up in conversation with another student, who was training to be a commercial air pilot. He then mentioned another flight which had been shot down by the Soviets a few years before 007. That was Korean Air Flight 902, which on April 21, 1978 managed to accidentally almost do a 180 degree turn over the north pole and fly into Soviet airspace before being fired on and forced to land on a lake. The wikipedia entry shows just how badly it went off course. 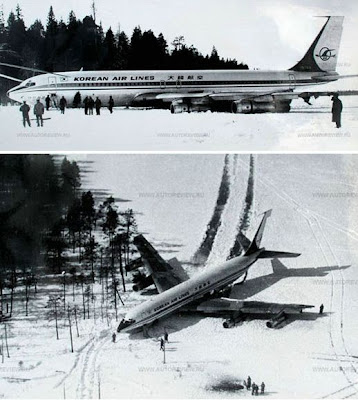 On Thursday night I noticed this entry at naver which had several photos of the crashed plane; I also found this Russian page which had the same photos. As noted at the Marmot's Hole, "The photos have been put up on a blog of a Russian car magazine called “Autoreview” apparently to advertise that a Land Rover pickup was used to haul equipment at that time. "

Another Marmot's Hole post led me to this collection of photos by Don O'Brien taken in 1945 and 1946 when he was a Signal Corps photographer with the US Army in Korea. Interested in cityscapes as I am, I found the photos he took from the top of the Bando Hotel (or Hanto Hotel, in Japanese) to be fascinating. Here's a photo of the Bando Hotel in the 1940s: 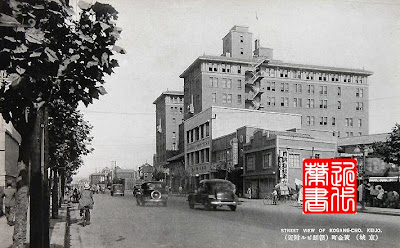 It's taken from this blog, which has many photos of the interior as well. I also found photos of a fashion show there in 1964, as well as an English menu (fried chicken for 850 won, anyone?). To see where the hotel was, this aerial photo taken in 1945 might help: 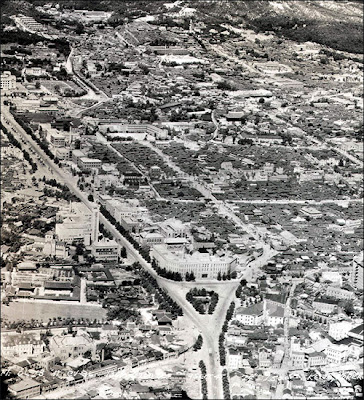 Look at the inverted triangle in front of City Hall and then follow the top to the far right of the photo (present day Euljiro). The edge of the hotel (and its fire escape) is visible. To the left of City Hall the current city council building is visible. It appears at left in O'Brien's photo below (all three of his hotel-top photos are reversed over at flickr). If the camera panned over to the left just a little, City Hall would be visible.

The photo below looks east down Euljiro. The Oriental Development Company building is visible at far right. If you follow the city's horizon, Dongdaemun is visible at center. The intersection in the foreground is of Euljiro and Namdaemun-ro. The whole section on the right from the hotel to Namdaemun-ro is now the Lotte Hotel. 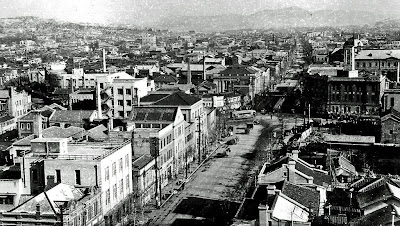 Here's a shot (again from this post) of the US military landing in Incheon in September, 1945. 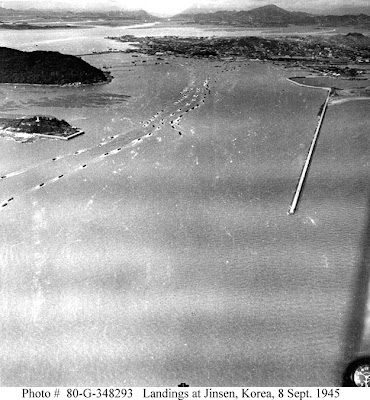 O'Brien provides us with a photo of the landing from his point of view: 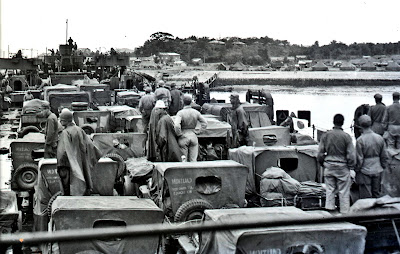 He also has colour photos of the convoy en route from Okinawa to Incheon, and of the flags of the allies hanging on the Government-general building. (I posted a first-hand account of the era of the US military government here). Here's a colour photo of refugees from Japan landing in Busan, one of many refugee photos he took. 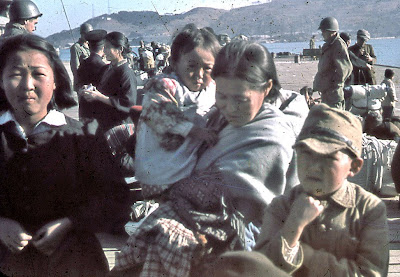 There are shots taken all over Korea showing landscapes, crowds in cities, political events, and portraits of ordinary Koreans. It seems photos are uploaded regularly, so checking back periodically would be a good idea. How can you not love this photo? 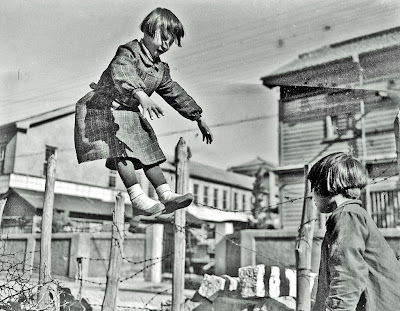 It seems that such haircuts for young girls were very much the style of the time.
Posted by matt at 2:02 AM

Fantastic! Thanks for posting these photos!

Actually that haircut was mandatory for girls attending Japanese-run schools. At least, it was in occupied China and I don't think the policy was different in Korea. Boys had to have their hair very short - a break with the traditional big old ponytails.