I had an interesting conversation with an adult student the other night. He's in university, and brought up the protests, mentioning something that I'd forgotten about him. He said he understood both sides in the demonstrations, because he did his military service in the combat police in Busan. He also mentioned that he'd been hit full on with a water cannon before and that it pushed him five meters in a matter of seconds.

I'd seen footage years ago of Daewoo strikers holding a sit-in being brutally beaten by riot police, specifically the 1001 unit. I didn't quite understand his distinction, but he told me there are combat police and auxiliary police, and that the auxiliary police are moved around a lot. They choose the biggest and toughest guys for these units, starting with 1000 in Seoul and 7000 in Busan.

He told me he'd called up his old unit (he finished in early 2008) in Busan to see how things were. They told him they hadn't showered in a week and a half, and rarely got much of a chance to eat or sleep. I'm not sure how big the protests are in Busan, but apparently they're big enough. Combat police on duty are on 24-hour call, he told me. I almost wonder if the system is designed to bring out as much irritability or aggressiveness as possible (he mentioned that police guarding the Blue house are on 4 day call). It reminds me of the guards at the Yeosu Immigration center, where a fire occurred last year which killed several migrant workers. The guards there worked 24 hour shifts as well. How you're supposed to be in peak condition after a 24 hour shift I'm not sure. It seems like the law of diminishing returns so well described over at roboseyo really does need to be understood, instead of just piling as much of a workload onto a person or structure as possible. Nothing bad happens when you do that, right? 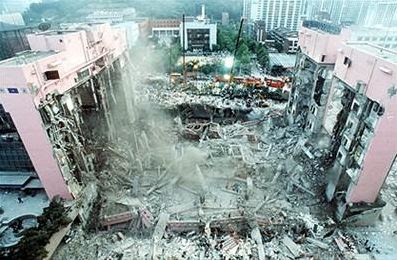 Yup, using this again.
I probably would have asked him several more questions about the combat police if I hadn't been feeling rather floaty after loading up on one of my packets of pills from the pharmacy (hello pseudoephedrine!) I was taking to treat my acute tonsillitis, something I hadn't really had since I was a kid. A week after getting it, I'm only just beginning to feel better. "But wait! Why were you teaching with tonsillitis?" you may ask. For the same reason combat police are on 24-hour call and fifth floors are added to structures only designed to support four floors! Now, would I have gotten better faster if I could have had more than half a day off? Would I be a domineering, arrogant westerner if I was to say that letting people rest, get well at home, and return to work feeling better is better than making people work even though they are unable to perform the tasks that define their job? Well, I'm not going to say that. I'll let ACNielson do the talking. They tell us that South Korean people are the world’s most vulnerable (52%) to cold.

People in South Korea seemed to be the sickest, suffering from most ailments and topping the global rankings for suffering from colds, indigestion, heartburn and toothaches.

Oddly enough, Japan, with a culture that is often quite similar to Korea's, is noted as being one of the healthiest countries. Something else to consider, beyond working employees to the bone, is the fact that the workplace, schools, or public transit are places where many might come into contact with others and catch a cold, much as in any city in the west (though there is much more public transit use here). Something Korea has that the west doesn't, however, is a plethora of hagwons. I'd imagine the average middle class child goes to at least one or two hagwons a day, which gives viruses even more chances to move about. For example here are the schools in Banghwa-dong: 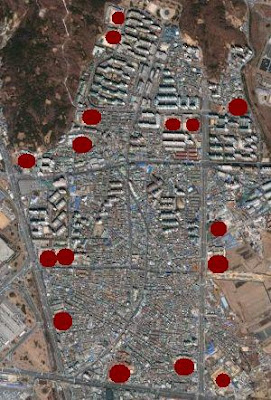 You can be guaranteed that the kids at these schools don't only have contact with kids from their school and immediate neighbourhood, but also attend hagwons (as far away as Mok-dong), which may have kids from several different schools in one class (Okay, the kids attending the schools at the bottom of the map probably don't go as much to hagwons, because the area is poorer - there are no apartment buildings there, right? Not to fear though, the whole area will soon be redeveloped). At any rate, hagwons are a 'social vector' for the common cold, if you want to call it that, that western countries don't have. Then the kids come home to their parents who never get sick days and make them sick. That's my theory anyways.

Back in February, Brendon Carr mentioned how unconcerned authorities are here about certain health threats. Given how he ends the post, it's well worth reading considering the nightly protests downtown that seem to see no end in sight.

Scott Burgeson has been attending the protests for several weeks now and talking with the protesters, as well as getting misquoted (to say the least) by the Hankyoreh. He relates some of his experiences and observations here, as well. Gord Sellar also has an excellent look at some of the tensions involved in these protests and looks at what has led to a dancing cat appearing on the GNP's website. Robert over at the Marmot's Hole also takes a look at Lee Myung-bak's first 100 days in office. Brian looks at the case of a comedian forced to resign for being ever-so-slightly critical of the protesters.

Hopefully I'll post more as I get back up to speed this weekend...

Hey man, I've recently discovered and have been reading your blog. I enjoy it and appreciate the amount of effort that you've put into this blog. I'm an American born Korean, and I'm conflicted about the issues you often bring up. I consider myself American first, and I actually spent most of my adolescence as a "self-hating" Korean. There were a lot of aspects about Korean culture I was displeased with. I am no longer that way, and have come to terms with my own heritage. Yet I've learned to keep an open mind about issues pertaining to Korea. The country and its people have their issues. I'm often in agreement with your assessments but I feel confused about your attitude to these problems. To what end are you pointing these problems out? Is your purpose to ridicule and mock? I know that is not your intention but I've been picking up subtle little points in your writing that makes me feel that way. Once again, let me say I do appreciate this blog and I am not downplaying the importance of highlighting the darkside of a society but maybe there should be more objectivity in your critcism?

I'm not sure, I just feel conflicted by most your posts and more often than not, I agree with you. Just it seems so negative all the time. Anyway, I love the effort you put in to this and will continue to read your blog. Not quite sure what I was trying to say, but felt I had to say it. (If that makes any sense at all.) Good work.

Matt, hope you're feeling better, I'll be around on the 10th for the Million Mad March so give me a call if you come downtown. And regarding my story about Hankyoreh, I wrote that three weeks ago and it's important to note that this protest movement has been changing daily so my views have evolved since then and I'm far less critical of the nationalistic elements of it than I was at the start. I also think if you -- meaning anyone -- only get your views on the protests from the English-language blogosphere here, you're more likely to be dismissive of them when in fact there are legitimate issues and concerns at stake.

Thanks for the link.

I agree with Scott that things are changing rapidly and it's hard to get a fix on where things are at any given time. I've been too busy (and somewhat disinclined) to turn up at the more recent protests, but my attitudes have slid from one direction to another since my last post on the subject.

Lime told me a story of being at one of the protests recently and seeing a kid who told a reporter the story of having been spat in the face and screamed at by protesters who disapproved of him pointing out that the beef panic itself is over-the-top and fears have been exaggerated. She shares with me the belief that the protests are about more than that anyway, but she went up to him and tried to encourage him that, by expressing his opinion, he was doing his part and that it was important he keep doing so.

The spitting-in-the-face thing reminded me of Scott's comment on my own site about the undercurrent of mob-authoritarianism, or whatever one might call it. But I agree in general that the real issues are important and so on.

Hot Pork... Not my place to say much but I have to wonder why you see negativity in Matt's posts. I see realism. There's a lot of negativity in the English-blogosphere about Korea -- Marmot's and Occidentalism and Dave's ESL for example; amid all that, Matt shines like a diamond for his thoughtful research, his careful and compassionate analysis, and the truly interesting stuff he comes up with.

This site might be a downer compared to, say, Arirang TV, but I wouldn't mistake a desire to be honest and realistic with mockery or negativity.