Magok Station opened last Friday. Known as the 'ghost station,' it is 2 stops before Gimpo airport and was open for a few months when Line 5 first opened in 1996, but soon closed because it's in the middle of farmland. These days it's still in the middle of farmland, but this new development led to the construction of a new road which connects to Gonghangno near Magok Station, so the station has been re-opened after 12 years. I've looked at the opening of Line 5 before, and photos of Magok Station's construction can be seen here. Here's what its single entrance looked like last summer:

Here it is yesterday: 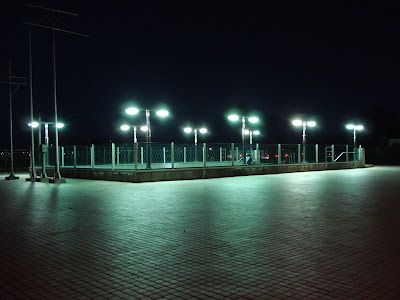 This skylight has always been there, but I never noticed it because it used to be surrounded by buildings which suddenly disappeared and no trace of them can be found. Weird. 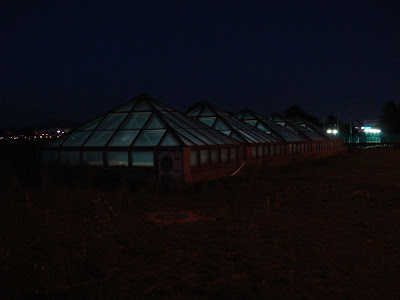 Here's what the entrance looked like a month ago. The roof structure had been removed. 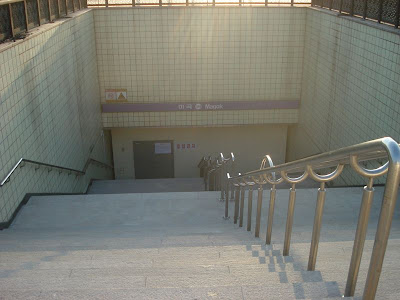 Here it is today: 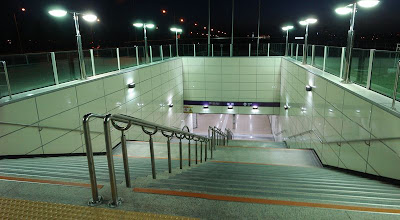 They spruced it up quite a bit. Before they started renovating it, you could go down the steps and peer through the shuttered entrance, like I did last summer:

What was interesting was that, as it hadn't been used since 1996, 4 years before the new Romanization system was put in place, the sign above uses the old Romanization and writes 'Panghwa' with a 'p'. That's been corrected:

If you notice all the columns in the older photo, you can tell that temporary walls have been put in place. I'd imagine new entrances will be built before too long.

A maintainance worker I used to teach said he had to come here every night to check on the station, and that two people had killed themselves there (presumably by walking through the tunnel to get there). He said it was a bit spooky at night.

I guess someone else had the same idea as I did.
Posted by matt at 6:02 PM

Saema Station is also in the middle of farmland. I once had to get off the train there at midnight because I'd drank too much and felt like I had to vomit (I didn't). Unfortunately the train I got off of was the last one. I was in the middle of nowhere with no street lights or anything to guide me, because there barely were any streets. I wound up being guided to a love motel by a guy who for some reason had been hanging out in the parking lot.

I'll bet we're going to have lots of stations in the middle of nowhere if all those proposed expansions get done. I saw a map a few years ago that showed then crisscrossing lines all over Gyeonggi, and even going out to Chuncheon in Gangwon-do. The line extends down beyond Cheonan, and once I looked to see how close they were to connecting with Daejeon (or Daegu, don't remember the closest city), but they're still quite far away.