An opportunist at the wrong time 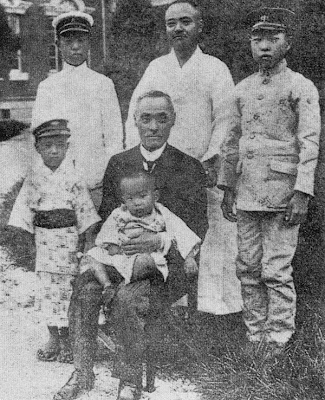 Yi Wan-yong and family
Andrei Lankov's latest column in the Korea Times is about Yi Wan-yong, and has a lot of details about his life I was unaware of. Lankov describes him thusly:

He was an opportunist, pure and simple: smart, to be sure, but always looking for opportunities to increase his power and, in later years, his fortune.

Born in 1858 into a poor country gentry family, he was adopted by a more prosperous relative and was able to take the state exams and join the bureaucracy. Some more details:

In 1887 Yi went to the U.S. to become a member of the first Korean diplomatic mission in Washington where he spent several years.[...]

When Japanese troops marched into Seoul in 1894, they established a new government [in] which [...] Yi was given the position of chief of national police. Eventually he became the minister of education.[...]

Later, Yi became active in the Independence Club, the first Korean political party.[...]
In 1905 he was instrumental in supporting the infamous Ulsa Treaty that made Korea into a de-facto Japanese protectorate.[...]

By around 1907 he was perceived as the most notorious pro-Japanese personality in the government, so in 1907 an arsonist set fire to his expensive mansion in Seoul. Along the way he was also the target of a number of assassination plots.

In 1910 when the Japanese forced the last Korean emperor to sign the formal treaty of annexation, Yi once again was one of the major forces pushing this treaty through the sometimes reluctant bureaucracy.[...]

He was richly rewarded for his services, becoming one of the most affluent people in Seoul.

He died in 1926, in great comfort and with official recognition, which, however, eventually turned itself into nearly universal condemnation.

The biography of Francis Schofield, a Canadian missionary who played an important part in the Samil movement, relates a story here that relays how Yi Wan-yong was perceived at that time.

It was near sunset when he got on a Seoul-bound train. The arduous and uneasy tour of the day made him hungry, so he went to the dining car. The moment he stepped into the car, he noticed a well-dressed elderly Korean gentleman surrounded by several uniformed policemen. The man’s face seemed overcast.

Sensing that the only Korean man important enough to have police protection at the time was Yi Wan Yong, Dr. Schofield went up to him.

“I am a Canadian missionary from . My name is Suk Ho Pill,” he said.

By the way, Mr. Missionary, how can I become a Christian?” It was a question Dr. Schofield certainly did not expect. Mr. Yi, accused of being the most notorious traitor who had sold to , seemed to be remorseful, especially after the outbreak of the March 1 Movement.

“If you want to become a Christian, you must first ask the forgiveness of the 20 million people of ,” Dr. Schofield answered. Yi’s face darkened at this remark as the policemen became visibly tense.

Recalling the encounter, Dr. Schofield said, “I should have taken a picture of him. After that brief meeting, we arrived in ."

I've mentioned Schofield before here. Another reference to Yi is found in this March 30, 1919 New York Times article, which is the translation of an appeal given to the American Legation in Peking. Referring to Annexation, it says

“Only one man, the traitor Li Wan-yung, knew anything about this act. How can one man privately give away a nation to another nation? Is it a thing to be pawned? This is not the action of a nation, but of a thief.”

I'll have another post on Samil up tomorrow.
Posted by matt at 7:50 PM