Korean towns burned by the Japanese, Canadians and Samil

Today is the 88th anniversary of the Samil (3.1) independence movement. For a description of the uprising published a year later, in 1920, Canadian journalist F.A. Mckenzie's Korea's Fight For Freedom can be found online here. Also well worth reading is the life of Francis Schofield, a Canadian missionary who is considered to be the unofficial "34th" signer of the declaration of independence and is the only foreigner buried in the part of the National Cemetery reserved for such patriots. His experiences in 1919 can be read about here, while links to other time periods (some of which he spent in Korea, such as from 1958-1970) can be found here.

Some of the following photos may well have been taken by Schofield. He was one of the only foreigners to know about the uprising in advance, and was present in downtown Seoul, camera in hand, on March first. The first three photos were taken in the Jongno vicinity, the first by the bell tower (at present-day Jonggak station). 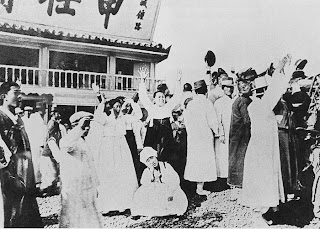 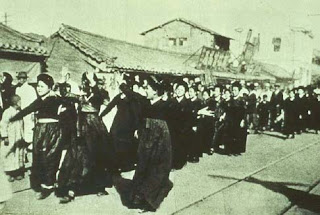 The following two photos were taken in the same area: the first was taken in front of Daehanmun, the front gate of Deoksu palace... 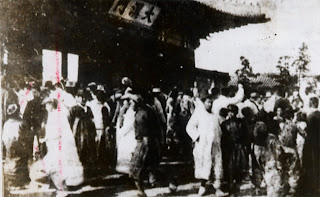 ...while the second shows independence protests in front of what is now city hall. 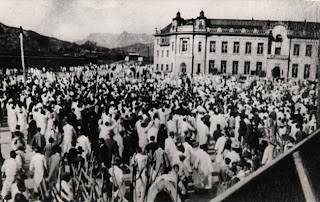 Protests were not confined to Korea. Below is a photo of a protest that took place in Philadephia, with Syngman Rhee present. Somewhere on my computer I have an excerpt of an opinion article in an American newspaper after the Samil movement began written by Syngman Rhee, rebutting George Trambull Ladd, a friend of Ito Hirobumi who wrote In Korea with Marquis Ito in 1907, extolling the virtues of Japanese rule in Korea. Unfortunately I can't find it. At any rate, the protest below took place on April 14, 1919, while newly discovered photos of protests commemorating the first anniversary of the uprising, which took place in Dinuba, California, one the first Korean towns in the US, can be seen here. 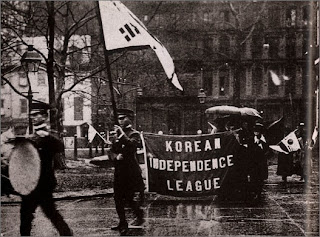 The day after the Philadelphia protest, one of the best known atrocities of the Japanese suppression of the independence movement took place in Jeam-ri, near Suwon. The Korea Times , Hankyoreh, and especially the Donga Ilbo have articles discussing a recently discovered journal written by Japanese General Utsunomiya Taro, 'commander of the Korean Army Command during the March 1 independence movement'. Not only did the journal confirm the massacre, its cover-up, and the punishment the officer in charge was given, it also gave some of Utsunomiya's views on the Samil movement: “It is only natural that Korean people have resentment, lament and feel agitated.” He was also among the first to recommend more autonomy for Korea. At any rate, on March 18, 1919, three days after the Jeam-ri massacre, Francis Schofield made his way down to Suwon by train, taking with him his camera and bicycle. After being questioned and then tailed by police in Suwon, he made his way to Jeam-ri.

Everyone he ran into on his way had a face deeply etched with sorrow. At a roadside he saw two small children crying pathetically in front of a newly made grave. Dr. Schofield took a picture of them […] At last Dr. Schofield arrived at the scene of horror. Among the ashes stood a charred column and a blackened partial wall where a church had been. All the houses near the charred ground had been burnt except one little cottage that stood forlornly.

Making sure that no one was around, Dr. Schofield held up his camera, when, lo and behold, he caught sight of a Japanese policeman and a westerner. The policeman came up to Dr. Schofield and asked, not too politely, “Who are you? What are you doing here?” Dr. Schofield did not know Japanese and just stood there. The accompanying western man interpreted for him.

“I am a Canadian missionary. I went to Suchon-ri on church business and dropped by on my way home,” he replied calmly.

The Japanese man did not dare query him because the westerner was an American missionary specifically invited by the Japanese to be briefed on the situation in Korea after the March 1 Resistance Movement. The Japanese wanted the American to report on it favorably for Japan.

Dr. Schofield asked the American, “Why did they burn the church and the houses?” The American answered, “A village loafer accidentally started a fire that quickly spread by strong winds, they say.” “Oh really?” was all Dr. Schofield could say but he could not believe the American’s obtuseness.

While the policeman and the American were deep in conversation, Dr. Schofield stealthily took out his camera and took a picture of the scene. 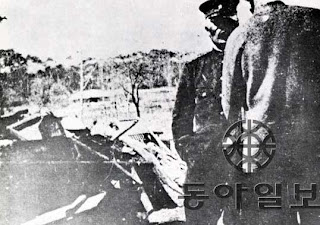 It goes on to describe the picture as “the only one of the Suwon Massacre.” Numerous other photos are said to be of Jeam-ri: 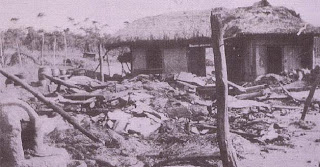 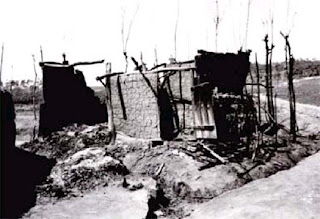 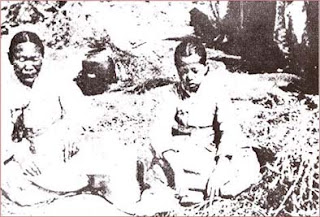 The first two photos show burned-out homes, while the photo above is said to depict two family members of a victim. If the account above is correct, and Schofield only took one photo there, this may explain the three above:

Having heard that there were other villages near Suwon that had been leveled by fire, Dr. Schofield went to Suchon-ri, and found only eight houses remaining out of the original forty-two. Since there was no one watching him, he was free to talk with the villagers, among whom one had been killed and many severely beaten.

If he was in another burnt-out village where he wasn't being observed and had a camera with him, it seems inconceivable that he wouldn't have taken photos.

It's odd that Schofield ended up documenting scenes similar to those that F.A. McKenzie, a fellow Canadian, photographed 12 years earlier when he searched for the Uibyeong, or righteous armies (as he describes in this chapter), who were then fighting a guerrilla war against the Japanese. In the autumn of 1907, he became the only westerner to travel out into the countryside and meet one of these righteous armies. He travelled by horse from Seoul to Icheon, then "Chongju" [likely Chungju], Chee-chong [Jecheon], Wonju, and then back to Seoul. He encountered combatants on both sides, as well as the civilians who had suffered the wrath of the Japanese counter-insurgency operations.

As I stood on a mountain-pass, looking down on the valley leading to Ichon, I beheld in front of me village after village reduced to ashes.

Up to Chong-ju [Likely Chungju] nearly one-half of the villages on the direct line of route had been destroyed by the Japanese. At Chong-ju ....I noticed that its ancient walls were broken down. The stone arches of the city gates were left, but the gates themselves and most of the walls had gone....I struck directly across the mountains to Chee-chong [Jecheon], a day's journey. Four-fifths of the villages and hamlets on the main road between these two places were burned to the ground. 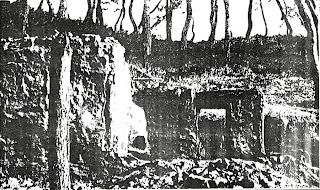 "The remains of a village inn"

The destruction in other towns paled to nothing, however, before the havoc wrought in Chee-chong. Here was a town completely destroyed...Not a whole wall, not a beam, and not an unbroken jar remained.... Chee-chong had been wiped off the map. 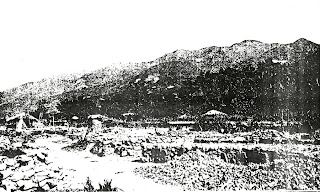 "The chief throroughfare of Chee-chong [sic]
burnt down by the Japanese troops"
After going to Wonju and then to a place called Yan-gun, McKenzie finally found members of the righteous army. On his way home, while passing through a valley, he was surrounded by other members of the righteous army who, due to his western clothes, mistook him for a Japanese, and was told

"It was fortunate that you shouted when you did. I had you nicely covered and was just going to shoot." Some of the soldiers in this band were not more than fourteen to sixteen years old. I made them stand and have their photographs taken. 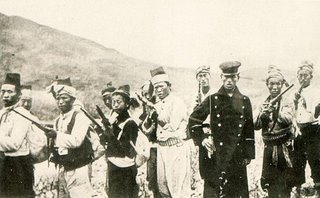 Mckenzie documented the high point of what was ultimately a futile attempt to stand up to the Japanese militarily. Seeing as Japan had defeated Russia only two years before, the outcome was never in doubt, though the righteous armies were certainly not powerless:

In June, 1908, a high Japanese official said that about 20,000 troops were then engaged in putting down the disturbances, and that about one-half of the country was in a condition of armed resistance.

Twelve years later, Schofield bore witness to another attempt to regain independence, this time eschewing violence, and once again villages began to burn. It's interesting what the official history chooses to remember and commemorate. By the end of the righteous army uprising in 1910, about 17,000 insurgents had been killed - far more than the perhaps 7,000 killed during the Samil movement. Both could be said to have failed, though Samil mobolized far more people and gave its participants the higher moral ground. Beyond that, I think the initial act - the signing of the declaration of independence followed by those who signed it turning themselves in to the police - resonates with the perceived Korean Confucian ideal of the scholar. That act was something men of letters could conceive of as a possibility, whereas taking part in military action was something they both considered beneath them and were incapable of pursuing.

This year is also the 20th anniversary of the June democracy protests, but you have to wonder how much they'll be celebrated (especially as the 15th anniversary was popularly ignored during the 2002 world cup). Perhaps you can draw a line from 3.1 to 4.19 (1960) to 5.18 (Kwangju, 1980) to the June 1987 protests (but do you include Cheju 4.3? Or Yeosu? And how was Samil's anniversary treated under the Yushin regime and Chun Doo-hwan?), but in the end, the 1987 protests have more connection to the present day than resistance to a colonial oppressor who's been gone for 60 years. But when you have new government-approved textbooks declaring that the mythical founder of Korea, Tangun, actually existed, it might not be the easiest point to argue.

Absolutely fascinating post, thanks! How did they commemorate it or not, this year?

I'm not exactly sure how it was commemorated this year - most years a ceremony takes place in Tapgol Park (where the declaration of independence was read that day in 1919). There are more photos from those days here.