The emperor and his homeless children

A while ago I wrote a post on the 1941 film Volunteer, which was included in the box set "Unearthing the Past", which Mark over at Korea Pop Wars first brought to my attention. I finally got around to watching another film in the box set, Angels on the Streets ("Homeless Angels" is the direct translation). A synopsis and discussion of the film can be found here, which tells us that it is "based on the real-life story of the boys who lived in Hyangrinwon, Bang Soo-won's home for vagrant youth located just outside Kyeongseong in Hongje-ri." Hongje-ri was likely where present-day Hongje-dong is, which is in Seodaemun-gu north of Yonsei University. The location of the Hyangrinwon in the film appears to be in the Banpo area, as they have to cross the Han river to reach downtown. 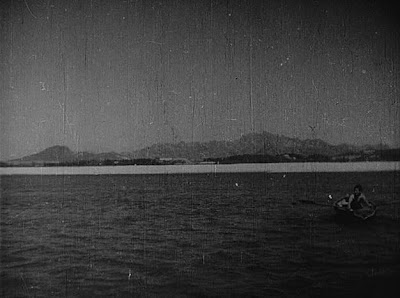 Above is a shot of the view from the beach in front of Hyangrinwon. At left is Namsan; towards the right is Bukhansan. Other shots in the film show what Seoul looked like at the time, such as this shot of a stream: 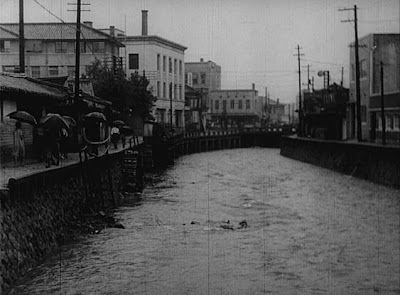 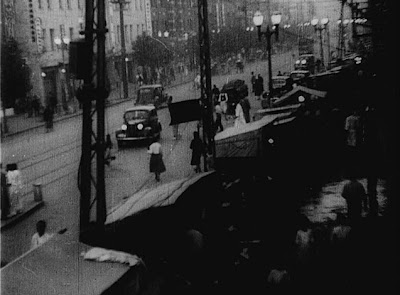 Notice what appear to be street stalls in the photo above. Below is a shot of a flashing night scene: 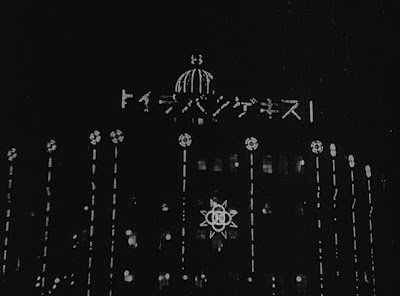 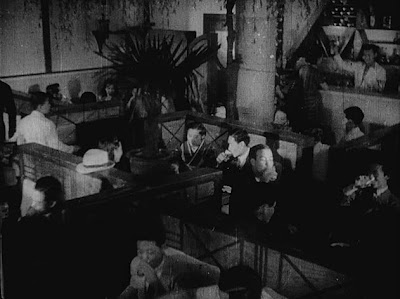 The story begins as a sister and brother who are selling flowers on the streets enter the tavern seen above, where a kindly, drunken doctor gives them money without taking a flower. 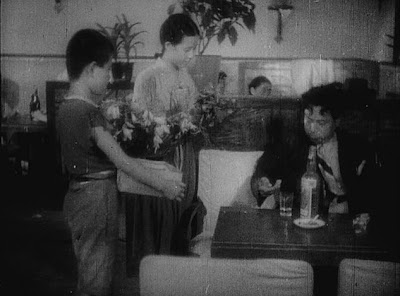 When the sister allows the brother to buy some taffy, their minders catch him and take them 'home'. Exactly what the situation is between this disreputable group and the siblings isn't entirely clear, but it's obvious they are in the group's debt (perhaps they even 'belong' to them). The sister is cajoled into working in a 'bar', with the promise that they'll withhold punishment from her brother. Her brother instead escapes. 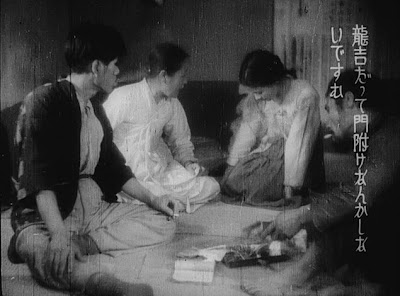 He then is rescued from a beating by the kindly Bang Seong-bin, who takes him to his house to stay with the small group of rescued street children already living there. 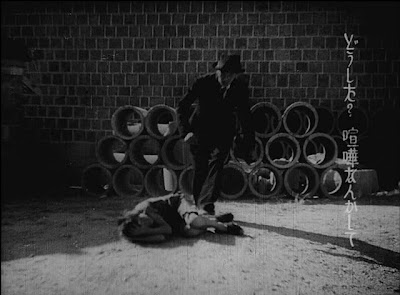 The kindly doctor from the beginning turns out to be Bang's brother in law, who helps Bang set up a home for wayward boys. Bang finds another recruit for his home when a boy tries to steal from him, and he saves him from being dragged away by the police (a Korean police officer, mind you). 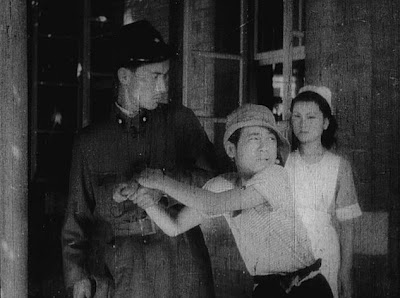 The doctor takes in the sister as a nurse, and she is eventually reunited with her brother before the boys have to fight off the hoodlums who come to get them back. Though it's all rather tame today, the conditions the street children live in, and the fear the boy shows as he's being grabbed by the police officer, for example, do not really reflect an entirely happy colony.

The liner notes for the DVD tell us that it was invited to Japan to win a prize but was then rejected by the ministry of defense, who objected to the fact the film was entirely in Korean, and several cuts were made (whether these cuts were only made in Japan or in the version released in Korea isn't really clear). The director chose poor street kids as a way to protest against Japan, and included the pro Japanese ending to allow the film to be released. KOFA's notes on the film criticize this to some degree:

Near the end, there is a scene in which the film's characters recite in Japanese a pledge of allegiance to Imperial Japan. This scene constitutes a critical flaw in recognizing Homeless Angel as a representative film in Korean cinematic history. Nevertheless, the reason why KOFA cites Homeless Angel among the 100 representative works of Korean cinema is because it is one of the very few surviving movies from the Japanese colonial era. Indeed, the fact that the propagandistic sequence is inserted irrespective of the plot and thus does not pose a substantial threat to the text's actual subject, as well as the fact that the film shows the highest level of sophistication among contemporaneous works, both contributed to its inclusion on the list.

I could argue that having the pro-Japanese ending isn't a "critical flaw" and that it is in fact precisely the reason why it should be recognized as a "representative film in Korean cinematic history," seeing as it reflects so clearly the time in which it was made. That might not be the most popular assertion among some people, and there is certainly a desire in the popular realm to wring all the complexity out of the colonial era and either try to forget it happened or turn it into a simple morality play populated by independence fighters and colonialist traitors. There's so much more going on in this film, however, and I almost had the feeling that whoever wrote the notes above watched a different movie than I did. To quote again:

[T]he propagandistic sequence is inserted irrespective of the plot and thus does not pose a substantial threat to the text's actual subject.

Let's remember that this film was made in 1941, after Japan had been at war with China for 4 years, and then see if anything else in the narrative could be seen as being militaristic.

After Mr. Bang has arranged for living quarters for the boys, he and his family move to their new home in the countryside with the boys, who fall in behind a cart and walk in a line single file while the lead boy plays a martial tune on a bugle. 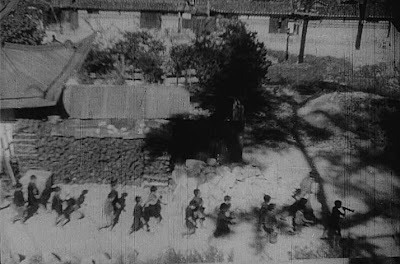 After arriving at their new home, the boys work outside. In the photo above they are cheering and pointing at an airplane flying overhead. 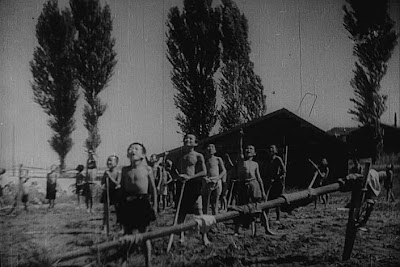 They are awoken in the morning by a bugler, seen here juxtaposed with the flag in the background. 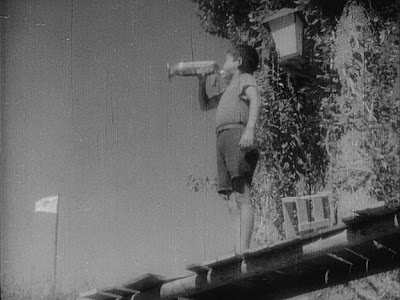 Upon rising, Mr. Bang has them assemble and talks to them. 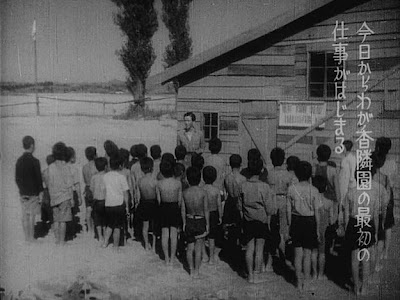 If you want to suggest they look like they're just at school, it's probably worth noting the degree to which militarism affected the school curricula and organization at that time. 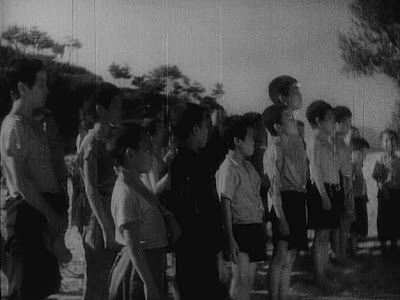 They're later taught how to take apart and reassemble a machine gun. Just kidding - they're taught how to make noodles with the press brought to them by Mr. Bang. 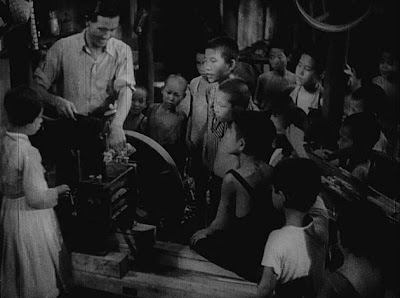 Later, when the thugs come to recapture the brother and sister, the boys try to chase them away as a group: 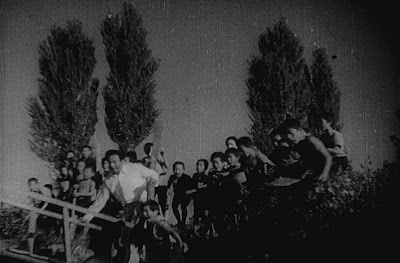 That said, the pro-Japanese moment (which lasts three of the last six minutes) is worth having a look at. 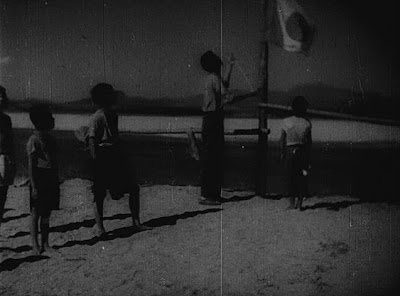 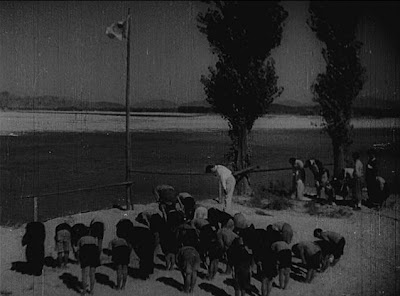 One of the boys recites the pledge of allegiance: 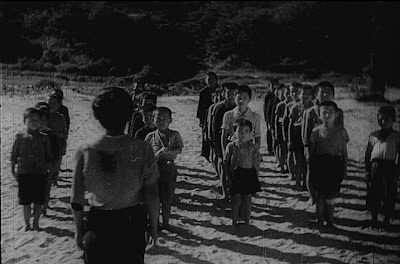 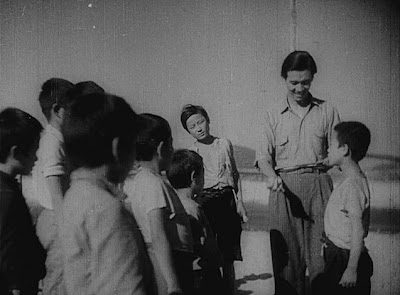 Thus ends the propaganda sequence. The point at which they leave for their new home is just over twenty minutes into a movie with a running time of 1:13, and from that point until the last six minutes (when the pro-Japanese moment appears), there are several scenes at the boys' home which suggest militaristic organization. That said, and after looking at the photos above, does the propaganda scene actually seem so out of place?

The epilogue is actually almost as fascinating as the "propaganda sequence". After hearing the boy recite the daily creed, the kindly doctor applauds and approaches the boys. 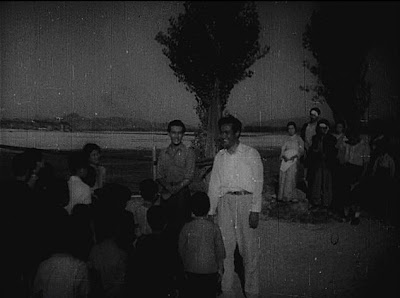 Then the doctor speaks and describes how he felt after arriving at the orphanage:

"At first I thought you were all incurable. My mind was set that you were impossible to help. But today I am actually ashamed of myself". Speaking of one of the boys, he says, "When I first saw him, I thought he had an evil mind and I thought he would never act like a decent human, but today he did a good deed. I am very happy". To help his friends, one boy "sacrificed himself".

"I was glad for all of you. You are here to become excellent people. And trying hard to become one by listening to your teacher. Do you know whose effort all of this is? Pointing to the man who has provided for them, this is [his] power of love. I believe you are the happiest children. You are all trying hard to become a great person, and it's all because of [him]. Now that the whole world knows about this, and the media is raving about it all around the country, I'm very happy. It's now that [his] great power, his great work has finally bore fruit. So now listen well to [his] words and become a great person. I hope you will be of great service to our country."

The first thing I thought of when I heard that speech was, "What would happen if you replaced the boys with "Koreans", and their teacher with "the Emperor"?

My mind was set that you [Koreans] were impossible to help.[...] "When I first saw [them], I thought [they] had an evil mind and I thought [they] would never act like decent humans, but today [they] did a good deed.[...] I believe you are the happiest children. You are all trying hard to become a great person, and it's all because of [the emperor].

I think with that speech, it becomes pretty clear what the boys are supposed to represent, and just how much of the movie is imbued with a militarist spirit. 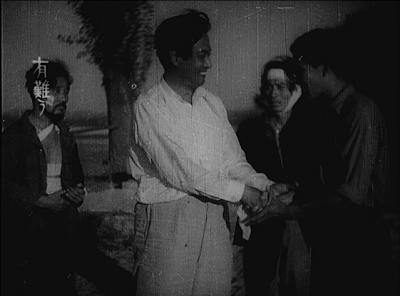 Is it just me, or does the doctor look like Kim Il-sung?
With that, the doctor bids farewell and leaves with the sister, who will train under him as a nurse. Having made up with the thugs, they leave together: 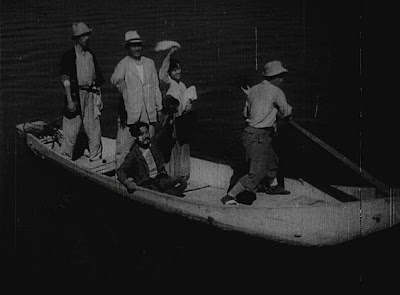 The children wave goodbye as the troop ship boat departs, the flag fluttering in the air above them. 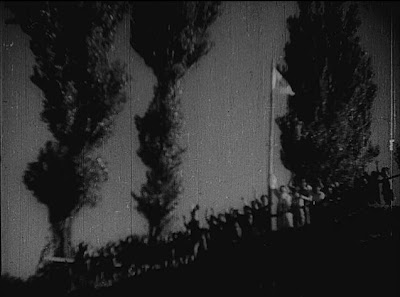 To put it simply, the propaganda in this film is not just limited to the last six minutes, "irrespective of the plot," but is actually embedded in the plot and is a part of the "text's actual subject."

The director would make up for this by directing his 'liberation trilogy', the first film of which, 1946's Hurrah! For Freedom, is available on dvd.
Posted by matt at 4:02 AM

There is an important scene during an earlier part of the movie that may change your impression of it. While the boys are at their training camp/house for wayward boys, one of the boys is sent to fetch water with a kettle. I am thinking of the ensuing scene where he encounters a yut seller, who tries to tempt him with the sweet treat. If the director seems to rely on symbolism, it is not difficult to see that the yut seller represents the temptations of the modernizing world that would corrupt a young boy (the Korean people). Considering this scene, and the fact that the rigors that the director put the boys through may have been plucked from the true story, it seems unlikely that there was a consistent subtle attempt to support the Japanese message.