I married a Korean

[Update: There is more information in Korean, and scans of many of the illustrations, here] 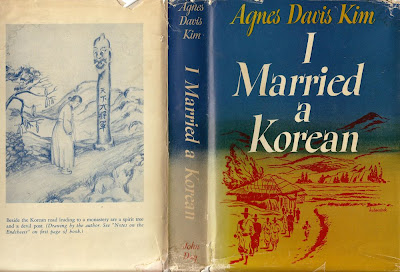 When I was at home over Christmas my mom mentioned a book she'd read as a kid titled "I Married A Korean," so when I was at my grandparents I looked through the bookcase and found it. It proved to be a fascinating read. Agnes Davis Kim met her future husband David Kim (we never learn his Korean name [Update - Chuhwang Kim - 김주황]) when he was studying in the U.S.. After a 6 year engagement, (during two years of which her fiance was in Korea), she sailed to Korea with several crates of belongings in 1934 , staying there until 1940. They luckily left before the Pacific War began, and in the U.S. her husband's language skills proved useful to the government, so he eventually joined the O.S.S. and served in China. As he was sent to Korea to serve in the U.S. occupation forces there, she eventually returned to Korea with their son, staying there between 1946 and 1948.

There are a number of interesting things to be found in the book, such as a discussion of attitudes towards interracial marriage, or the ways in which she copes living in a farmhouse in the countryside (we never learn where, exactly, but it was likely within the modern boundaries of Seoul, perhaps northwest of Sinchon). She also describes how Korean food is made (an appendix includes recipes) as well as describing traditional ways of doing laundry and ironing (often deciding that the final product of such work was superior to the results of western methods - but that the effort involved was too much work for her). She also includes a number of her sketches: 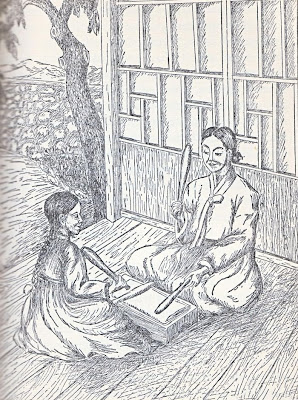 "Ironing with ironing sticks"
The description of ironing which accompanies this sketch is interesting:

While the process takes a long time, two women often share in the pounding, chat on all kinds of topics which interest them, or work out intricate rhythms that make the ironing fun. Certain rhythms have come to have special meanings.

Fascinating. Also worth noting is the fact that, without she and her husband's efforts to operate a school and medical clinic, the farming families around them would have had no access to education or modern medicine. Considering that they lived very close to Seoul, it certainly makes me wonder just how much the Japanese did to improve education and health care in areas outside of the cities.

This book was originally published in 1953, but a 1979 reprint by the Royal Asiatic Society is described here. Also worth noting is that on her voyage to Korea she describes her conversations with John Patric, who would later go on to write a book about his adventures traveling in the Japanese empire called "A Yankee Hobo in the Orient." I managed to find a little information about this book and its author before realizing it was first published under the title "Why Japan Was Strong," which can be read in part at Google books. Pages 28-32 tell part of the story of the time he spent with her on the ship, and page 31 is well worth reading for a laugh. What's also interesting is that she told him only that she was marrying a missionary, though he would learn more about their marriage when he later traveled to Seoul.

This book may prompt a few posts; for now I'll start with her chapter on the American occupation of Korea in the 1940s.
Posted by matt at 12:15 AM

Besides the fascinating content of the book, the title has a slightly tabloidesque air.

Irma and the Hermit: My Life in Korea
By Irma Tennani Materi, Never Ending Flower by Susie Younger and A Forbidden Land: Voyages to the Corea By Ernst Jacob Oppert

i'm not sure if i have anything constructive to add to this, but i wanted to tell you that agnes kim was our neighbor many years ago when my family lived in seoul. i think i was probably 9 or 10 at the time. she had a very nice garden in the front of her home and she invited us over often. i thought she was a lovely lady. my parents told me she wrote a memoir, but i never read it. i think they even had the book. i'm going to track it down now. also, many of her observations about the american occupation and how it affected the korean people were still being played out while i lived there (1982-1998 or so). i too felt ashamed.

Thanks for the comment. Was she still living in Hongun-dong at the time? According to an updated version of her book from 1978, she said that in the mid 60s they moved back into the house they built in 1935 and fixed it up, then bought more land behind it in 1976 before turning it over to Yonsei University. It's probably worth writing another post about her, actually...

i had to check, but i think hongun-dong sounds right. we didn't really live in seoul for too long compared to other cities in korea.

We used to visit "Aunt Agnes" and "Ahjusee" (not real relatives) several summers in in the late 50s on their farm in upstate New York (I think). I had many "firsts" at that farm: milked a cow, tasted raw cow's milk (ugh), smelled chitterlings cooking (double-ugh), stole through the private quarters of the hired family, watched a cow being birthed, found the outhouse in pitch dark... I remember him as being scholarly and older, while she was hugely energetic and active, her hands seemingly giant with what they were capable of.

Thanks for the comment - interesting that you stayed with them in New York (in Roxbury, according to the 1978 edition of the book). I have found a few other articles about/by her in the Korea Times in the early 1980s - I'll try to post them before too long.

Your blog helps me with some unanswered questions about myself. If you could be so kind to check out my site and give me your initial thoughts. Thanks. www.myseoulfood.com

Teensy correction: according to Living Dangerously in Korea (the Donald Clark book I'm pretty sure I picked up on your recommendation), and am now reading, this book was actually first published in 1943. He could have the date wrong, though... he has John Day as the publisher.

You're right - the edition I have is a 1953 expanded reprint, but the original was published 10 years earlier (I found this out after posting about this book, but forgot to update it). The 1953 edition has the new (useful) chapter on the post-WWII US occupation.

Hi Matt, did you ever find those articles by or about "Aunt" Agnes in old Korea Times? I'd love to share them with my family. Thank you for your blog. Eugenia

Hi Eugenia,
The articles I saw by her turned out to be discussions of, for the most part, Christian theology, so I quickly lost interest (it wasn't even connected to issues of the day, for example). There is an article I found that tells about her life in Korea up to the mid 1980s, but that could take some time to find; I'll see if I can. (The same information is in a 1978 (or so) Royal Asiatic Society-Korea Branch reprint of her book which has an extra chapter telling of her life since 1953.)